I only went down there to help out a tired friend selling clothes…but it turned out to be an interesting day.

For starters, it’s great to do a job in which you are actually required to flirt with the customers. And the customers: men being led by a chain along the clothes racks; newbies nervous about their first fetish clothes item…gingerly trying on rubber shirts (try talc); learning the correct fastening for corsets; being offered one woman’s partner as a ‘playmate’…
“He’d like you. He’d love to get his hands on your breasts” she told me, eyeing up my cleavage “I’m his primary partner but we are open. I need my space. He likes variety. Do you like punishment?”
“Not really” I confess”and I’m very possessive. I couldn’t share.”
“That’s ok. I’ve always said to him if you find someone more suited then that’s fine by me.”
“My god, you are like the Mother Theresa of the fetish world” I say to her.
This was the last Alternative market being held at the pink and baroque theatre Clapham Grand which is being transformed into a winebar. The organiser got up and made a speech about proposed government legislation:

“What I do in my bedroom is my business.”

He is referring to the new law making it illegal, punishable by up to 3 years in prison, to possess certain types of sexually explicit imagery:

Leaflets were scattered around, produced by The Spanner Trust, giving advice and solicitors numbers in case of arrest.

The fetish scene is a strange mix of the mundane and the exotic. As I was wandering around the stalls, a nasal suburban voice announced:

“The whipmaster has been delayed due to traffic on the M25. The workshop will take place as soon as he arrives.” 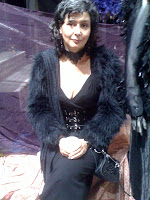 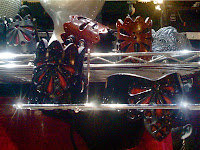 I am impressed by the sheer craftwork involved in some of the goods for sale. Zahira’s Boudoir makes chokers, bags and jewellery in intricately punched leather, giving a feminine lacey effect to a material that is usually associated with butchness. Zahira herself spends weeks making each item. She is an Aquarian as were many of the other people I spoke to, confirming previous observations (here) on the astrology of sexual ‘deviance’.

Another stall, Erotic_jewellery run by a husband and wife team had witty items in silver such as earrings in the shape of women’s bottoms. 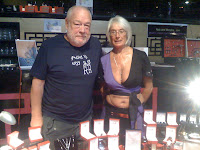 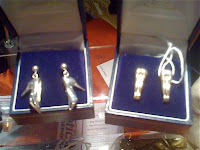 They also had nipple jewellery. Looking at the star shaped pieces, I mentioned Janet Jackson.

“Oh yes our ‘Janet Jackson’ is a popular item.”

It appears that this is what Janet will be remembered for.

I saw a demonstration at a stall which sold restored vintage ‘violet wands’, a Tesla based technology which administers a mild electric stimulus to the skin. Nick was administering this to a large girl, starting on her arm and progressing to her nipples. The girl had a beatific smile on her face.

The sensation is mildly unpleasant to start with, like being stung by a bee. It’s a sweet and sour experience. But afterwards you feel quite refreshed and stimulated, energetic. 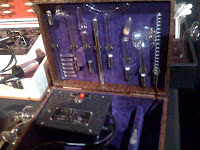 Another stall ‘cum-naturally.com’ sold hand-crafted wooden sex toys. I spoke to the ‘sculptor’ who is a bushcrafter, teaching survival skills in Surrey. He alerted me to the dangers of phthalate, the material used for modern day vibrators and sex toys. This material is deemed dangerous for children’s toys but, despite containing 50 times the safe amount, it is allowable in  sex toys because they are classed as ‘novelty items’.  Therefore these wooden toys are eco-dildos. 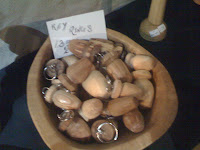 Butt plugs on a keyring
The whipmaster had arrived. One lady was enthusing about the ‘bang’ of a bull whip. “I can’t have sex now without the bang sound”. The ‘bang’ is actually a sonic boom produced by the sound waves travelling down the length of the whip. The speed of the whip breaks the sound barrier. I looked at a £65 ‘snake whip’, beautifully crafted, intricate strands of leather weaved to a feathered point.
On stage the whipping demonstration started. Two girls stood either side while a man in camouflage showed skill and accuracy with his whip, curling it around their waists and spinning them. I got told off for taking a picture. You can’t identify these girls. Five minutes later one came down showing off her bloody welts and I didn’t recognize her with her clothes on.

The other girl’s scars were just raised lines where she had been whipped.

“This is all I get,” she lamented “I don’t bruise either”.

Later, back at the clothes stall, a timid looking pale young man with greased down hair and moist blue eyes is looking for a Halloween dress. He picks a Dynasty-style 80’s frock with padded shoulders.

Afterwards people went to the after-party in a pub. I didn’t go. It does however bring new meaning to the phrase “Who’s for a whip round?”