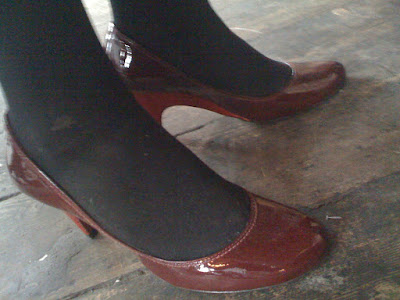 My teenager has just come back from two days at my parents. She rocked up there in complete Victoriana, a ruffly white dress (“It’s dirty.” “I know, it’s supposed to be.”), little lace-up boots, and a black and white leg o’ mutton sleeve coat. The little match girl indeed.

Of course my parents are horrified. My dad spent the whole two days sighing. My mum, who possesses a rapier wit, said cruelly that my teenager looked like Lawrence Llewellyn-Bowen. To make matters worse, the ‘perfect cousin’, all meek manners and Christian values, same age as my daughter, was there.

“I told them that they didn’t have to buy me anything, that I’m not celebrating Christmas. Grandpa and Grandma hate me now”, says my teenager.

“They don’t really you know. It’s me they hate. They are just expressing their annoyance with me through you.”

She is very happy however because they bought her Emma Watson’s(1) dress and shoes from a vintage shop. The dress was made by Emma Watson’s mother. It is rather lovely.

“So what happened with your friend the other night?” I ask, referring to the sleepover.

My teenager has this theory: most problems fit into ‘second layer stuff’. This includes love problems, money problems, housing, education, body issues, politics, health. She, on the other hand, only worries about ‘first layer problems’, which are existential: Why are we here? Are we even here? What is the nature of consciousness? That type of stuff.

“What are your friend’s ‘second layer problems’?”, I ask patiently.

“Well she’s not very attractive, not very intelligent, her mum has made her live in a foreign country, and she’s always crying about losing her dads.”

“Her dad…z?” I emphasize the plural.

“Yeah her real dad and her step-dad died. But that was years ago! She’s still going on about it”, says my teenager wearily.

“Hmm to lose one dad is unfortunate, to lose two is carelessness”, I paraphrase.

We both snicker nastily.
(1) Emma Watson is of course the actress who plays Hermione in the Harry Potter films. My teenager is a Harrypotterologist.