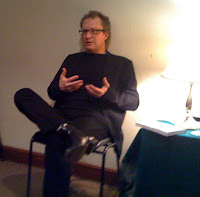 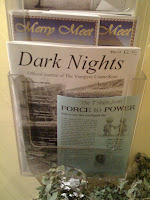 Treadwells sells interesting magazines such as ‘Dark Nights’, a quarterly for vampires.

Along with Julian Cope and Andrew Collins, writing about the esoteric seems to be a popular career move for ex-pop stars. Gary Lachman, then known as Gary Valentine, used to be a guitarist with Blondie and Iggy Pop.

Monday night he gave a short talk at the intimate bookshop ‘Treadwells‘ in Covent Garden(1) (which looks like it’s been there forever but is actually quite recent), to launch his latest book ‘Politics and the Occult’.
Inspired by the occult historian James Webb’s book ‘The Occult Establishment’, Lachman wanted to explore the impact of modernity on the occult revival of the 19th century.
The main trouble with the talk was Lachman’s extensive and sometimes obscure knowledge. He gabbled out names which frankly I had never heard of before. Therefore I was too shy to ask questions but afterwards discovered that some other people were equally ignorant.
He began by illustrating links between the occult and the Left in the 19th century:

“we had  Annie Besant, and the Fabian Society. After the Russian Revolution there were also Steiner groups. The English socialist Edward Carpenter, in the 1920’s, was the pioneer of what became known in the 60’s as ‘dropping out’ and also popularised sandals. Carpenter was a proponent of gay rights and a big influence on Ouspensky.”

The link between the occult and politics moved generally rightwards after World War I. It became associated with the far Right and Anti-Semitism, a kind of “spiritual racism”. In 1919 there began a French organisation called  Les Veilleurs ‘The Watchers’ led by René Schwaller de Lubicz, Egyptologist and alchemist. This underground esoteric group, interested in Aryans, heraldry and hierarchy, and with dodgy views on race, had a dress code, brown shirts and jodphurs. It is rumoured that Rudolf Hess was a member and that he got some of his ideas on haute couture from The Watchers.

An audience member quipped: “before Himmler got Hugo Boss involved…”

There is a fundamental clash between conservatism which values folklore, tradition and the occult and the Left which vaunts modernity and considers all unscientific belief to be ‘the opiate of the people’.
An audience member asked: “Where would you class modern American neo-paganism?”. I assume he was talking about people like Starhawk, an American witch who is heavily involved with the ecological and anti-capitalist movement whom I met at the Gleneagles Anti-G8 camp. (2).
Lachman did not have the space to deal with that in his book:

“You mean the yippies, Jerry Rubin, ‘Just do it’? Did you know that during the 1967 anti-war march, they tried to levitate the Pentagon?”

Lachman admitted that despite his own interest in the occult, he is a product of modernity

“I buy cheap paperbacks at chain stores, only available because of modern mass production”.

Today the ‘bible belt’ in the U.S. continues this link between the occult and politics; Lachman remarked:

“with the departure of Bush, we now have Palin. It is occult belief the idea that angels will descend…the whole American cult about the apocalypse ‘The Rapture’ and The Order of Archangel Michael (which originally came from Roumania in the 1920’s).”

“The extremes of Left and Right meet and hate the modern world. The elite school of intellectuals such as Adorno on the Left called the gnostic world the ‘nadir of sterility’.
Scientific meaning is always pitted against religious meaning and neither work.”

There is a neurotic need for the occult in it’s widest sense, that is anything ‘supernatural’.
The modern view, states Lachman, which is

“you are on your own, there’s nobody out there, as Nietzche (who has been variously adopted by the Left as well as the Right) describes, it is troubling to us. “

Lastly Lachman mentioned occultism in the context of feminism, citing the interesting example with reference to recent events, of Victoria Woodhull, an American spiritualist, who in 1872, ran for president with a black man, Frederick Douglass, as her running mate. She spent election night in jail. Lachman remarks that:

“the powers that be were not too happy with ‘Mrs Satan’ as she was known.”

(1) Treadwells is around the corner from the divine perfumier ‘Penhaligon’. (Steve Wilson of the O.T.O remarked at the event  that the creation of perfume originated within alchemy.) That small section of London, not far from the British Museum, contains many esoteric bookshops: Atlantis, the Astrology Shop, Watkins, Mysteries, New World.
(2) Starhawk and her ‘sisters’ protected the camp and protestors with invisibility spells.