Warrior statue of Boudicca beside the Thames

Boudicca, with her long red hair. 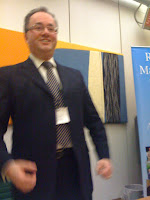 Boudicca is the archetypal British warrior woman and I have always wanted to know more. To the extent that I was even willing to go to a, wait for it, Conservative event to hear a talk about her.

Ms Canal Explorer accompanied me to the House of Commons. We were both rather nervous, having spent most of our lives hanging out with lefties and anarchists. You know that hackneyed phrase “some of my best friends are Jews or Black”? Well none of my friends are Conservatives. To be right of centre in arty circles verges on the socially unacceptable.
The House of Commons is awe inspiring; from the enormous medieval stone halls with paintings of King Arthur on the walls to the white shirted and tailed ushers to the dark green seating. I can imagine visiting foreign dignitaries must be overwhelmed. Especially compared with today’s inauguration which, frankly, to me, looked like a parade from Disney’s Main Street, in spite of the heightened emotion.
Entering the room where the talk was to be held, my first impression was that they looked like Tories; old ladies with Margaret Thatcher hairdo’s in Jaeger suits who’d gone up to town, younger men with short back and sides in suits, shirts and ties, there was even a child there. I thought “they even bring their kids to Conservative events”. Youth and Conservatism seem an anathema.
The speaker Rupert Matthews is an author and Conservative Euro M.P candidate. Strangely for a Conservative, he is interested in occult phenomena particularly UFOs. I asked him what he thought about the recent tentacled UFO sighted in the UK.

“Well, of course I was very excited, who wouldn’t be? But I’m afraid I don’t think it’s genuine. It doesn’t fit into the pattern”, he replied.

We don’t really know how the Celts pronounced the original name of Boadicea, which is the Latin translation of her name, but historians have surmised that she was called Boudicca.The reason why Boudicca is still remembered is because her story, the ruthless nature of the battles, were unusual. Her tribe, the Iceni, from today’s Norfolk, would have little wars every 3 to 4 years. These skirmishes were fun, profitable for money or slaves and a chance for ambitious young men to earn glory before the King. Celt society, whilst hierarchical was also socially mobile. An act of bravery on the battlefield would transform the fortunes of a family. The general scenario of a battle would be thus: there would be infantry and also chariots, which were not a weapon of war but a chance to show off. For this reason most Celt battles took place on flat open land where chariots could easily gallop at full speed towards the enemy with flashy warriors doing handstands and balancing acts on the horses whilst throwing spears. The side that did this the best would demoralise the other side who would then run away. After that a few families would switch allegiance. Some people were killed but not many.
The ambition of Celt youth was to afford a shield, a spear and a sword which would enable social advancement.
The Romans however were professional soldiers. They fought to win, to take land. They wanted to conquer Britain.
Boudicca, 45, was royal; she became leader of the Iceni on the King, her husband’s, death. This king left his realm and his land to his two daughters but also left some land to the Roman Emperor Nero in an attempt to soothe. The Romans did not believe women should inherit land or be leaders.
At the time there was a new governor, Suetonius Paulinus, who went off to conquer Wales leaving the situation in the hands of his procurator (or treasurer) Catus Decianus. This procurator was corrupt and greedy. He entered Iceni land with Roman soldiers where they took whatever they wanted. When Boudicca objected they flogged her, tied her up and raped her two daughters. This caused outrage. To treat royalty in this way was sacrilege to the Celts. The priesthood, the druids, also felt their gods were being insulted.
The Celts reacted with fury. They first attacked, led by Boudicca, the Roman fort of Colchester. Every Roman citizen was murdered or raped.
Rather than march straight to London, Boudicca decided to attack the 9th legion, about 6000 men, on their march southwards. Again it was a rout. Nobody in the legion survived the slaughter. This was shocking at the time. The unruly Celts massacring a professional legion. Boudicca was a very good commander who managed to keep control of the Celts.
Next stop was London where Boudicca triumphed again killing each man, woman and child, burning every building down. Heading up Watling St. (where I live) her army did the same in St. Albans. This was a war for revenge, not fun and profit. There was no looting.
Finally Suetonius returned from Wales and took the Boudicca threat seriously. By now the Celts numbered 250,000. They outnumbered the Romans by 4 to 1. It is believed that Suetonius made his stand near Birmingham. He used a clever strategy. Knowing how the Celts fought their battles, he surrounded them in a U-shape. The Roman soldiers had enormous shields and the Celts simply could not penetrate the front line wall of soldiers. When the Celts realised they weren’t going to win, they, as usual, ran away. However, and they did not expect this, the Romans tracked them down. Knowing she was defeated Boudicca took poison and committed suicide. She knew her fate if she was captured by the Romans. She would have been taken to Rome and tortured in public.
When the Victorians were building Kings Cross station, they discovered the spectacular tomb of an important Celt, a woman, who was buried with a chariot. This was found under platform 9. (It immediately occurred to me that in J.K.Rowling’s Harry Potter books, they took the train to Hogwarts at Kings Cross from platform 8 3/4. I wondered if this was a nod by Rowling to the legend of Boudicca.)
After the rebellion the governor killed anyone who had joined the rebellion. The newly appointed procurer, said if you kill them, we can’t tax them. So a new governor was sent from Rome who spent the next 5 years, ‘winning hearts and minds’ of the Celts. This worked very well to the point that Britain became the last outpost of the Roman empire, even after Rome had fallen.
Afterwards in the pub, I discussed with Rupert how Britain has always been comfortable with female leaders; Elizabeth I and II, Margaret Thatcher, Matilda, Victoria to name but a few. In France they had the Salic law, which prevented females from inheriting the throne in their own right. And whatever you think of their politics, look how America has responded to Hillary Clinton and Sarah Palin.