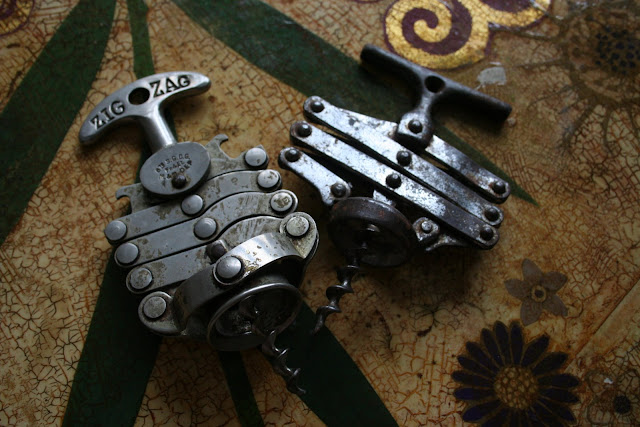 French tire-bouchons
My guests arrived on time. My emo teenager sat in the corner on a rocking chair looking like a scene from ‘The turn of the screw’. Then, greeting her with almost choking relief, my sister arrived to waitress. After handing them a complimentary glass of kir royale to celebrate the opening night, people were seated for the first course.
I introduced several food bloggers to each other, Bellaphon, Foodrambler and Londoneater, the virtual colliding with the real. Which is partly the point. This is ‘put your money where your mouth is’ time. Anybody with a digital camera, a way with words and a budget for eating out, can put up recipes, review food. How many food bloggers then invite you over to actually try the food for yourself?
I disappear into the kitchen where the Guardian photographer has set up. I am tempted to go all Nigella on her, licking spoons artfully for the camera. She tells me to stop it immediately.
I have a table of friends here, a writer Caroline Simpson and two famous astrologers, Bethea Jenner and Michael Day, but otherwise I don’t know anybody.
I confess only half-joking to the Guardian photographer that this is all an elaborate scheme to find a boyfriend. I have no one to cook for, my teenager won’t eat hardly anything, so I invite strangers over.
Horton Jupiter arrives saying his plus two will not be coming as they are too drunk. These are the people for whom I made extra mousse au chocolat. I think for the future I will ask people to ‘donate’ in advance via paypal. I was annoyed as I had turned down reservations for tonight.
I cover the kitchen surfaces with bowls to serve the roasted cherry tomato soup, placing a basil leaf in the middle of each, accompanied by a hunk of warmed up herb focaccia.
The gratins are cooked, the potatoes are soft in their cream but the tops need browning. I juggle with the various Aga ovens, alternating which dish of gratin will go in the roasting oven. I’ve cooked 4 baking tins worth of gratin, enough for 15 people.
Horton comes into the kitchen and strokes my Aga. We discuss Jeremy Clarkson’s comment that Gordon Brown is a “one-eyed Scottish idiot”.
Which I say is “factually true”.
Horton then  announces that David Blunkett could not possibly be a good government minister “because he is blind. Der!”
“What’s that got to do with anything?” I ask.
“He’s a stupid right-wing twat.” states Horton.
“Yes. He should not be in government because he’s a stupid right-wing twat, agreed, not because he is blind.”
My sister shoos Horton out of the kitchen. The Guardian photographer, who has been a witness to this exchange gasps. “You can’t say stuff like that!”
I smirk to myself: well done Horton, you just lost the politically correct vote, she is from The Guardian after all.
Soup bowls return. We start to plate up the gratins, a relay with myself digging them out of the tins, my teen rushing them over to my sister who will add the two salads. I look over and realise my sister has piled the salad up high. The plate looks like something Popeye would eat.

“No, no, no. Not like that. Smaller. A scoop. Then trickle the dressing over!” I command.

The main course served, I go into the living room and have a little chat with each table. I’m playing so many roles here; cook and hostess. I’m wearing a smeared white apron.
When the plates return I notice somebody hasn’t eaten their gratin. I have to stop myself going to tell them off. This is a mother’s restaurant after all. 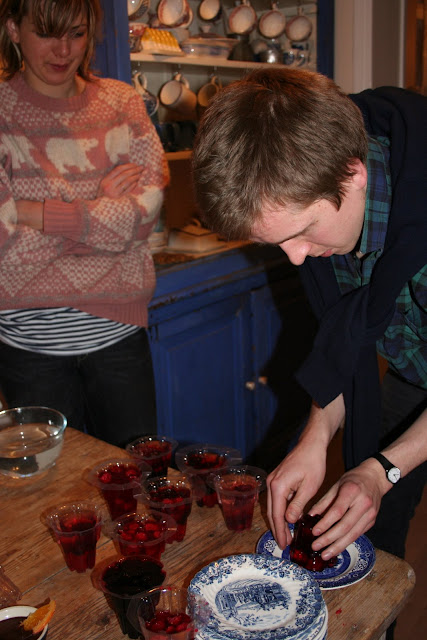 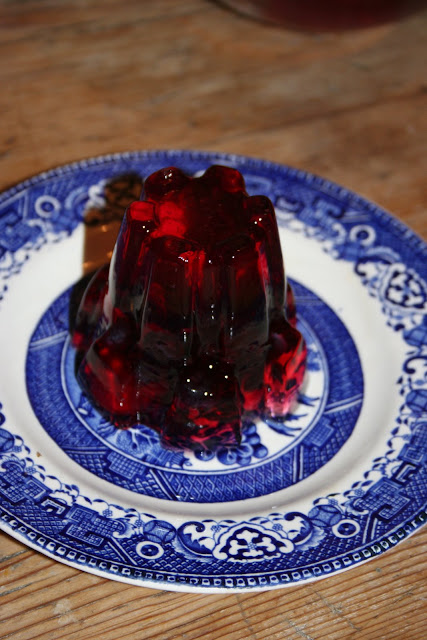 Blackcurrant jelly
The charming Bompas & Parr, who make art jellies for installations and parties (last week they did Mark Ronson’s party) are here. They have brought some jellies in a cool box. Asking for a bowl of hot water to ease the jellies, elderflower and blackcurrant, out of their moulds, they serve them to each table as a ‘palate clearer’.
Finally the chocolate mousses are served with a chocolate-dipped candied orange slice. A couple of people leave their candied orange slices. They are so good I scoop them off the plates and eat them up later.