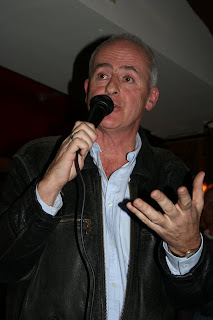 “Turn off your mobiles or you will be put into a small room with Paul Dacre, the editor of the Daily Mail”

warned Nick Davies, author of Flat Earth News who was giving this month’s talk at the Skeptics in the Pub, London. Clearly considered a fate worse than death, everybody duly turned off their mobiles.

“…Paul Dacre calls people ‘cunt’ so frequently that his newsroom have named him ‘the vagina monologue’.”

Nick, a jittery man in his late 50s, breathlessly sped through his lecture as if he had too much to say and too little time to say it.

He launched straight in with ” The reason I’m ‘telling on’ other journalists is because of WMD. When it became clear that they didn’t exist, every journalist in the world blamed the government but no one talked about the media’s role”.

There are so many false stories… Y2k for instance; the Clinton scandal- all false. The children’s home in Jersey – false. There are thematic falsehoods. The sex trafficking scandal right now- I can tell it will turn out to be false.”

He breaks off to remark that he has never been to a meeting with so much alcohol involved. People cheer. The pub actually runs out of glasses and people are exhorted to bring back their empties so that more alcohol can be served.

“Before, say 30 years ago, false news was down to proprietors of newspapers. That is still a problem. Almost all local newspapers are owned by four corporations. There is a profit/cost culture. The logic of commercialism has taken over from the logic of journalism.”
I got a grant from the Rowntree trust and gave it to academics who physically measured the space available in newspapers that journalists have to fill. Today the average journalist has to write three times as many stories, fill three times as much space as in 1985. What does this mean? Well,  the average journalist has a third of the time to spend on each story.”

In other words each journalist has less time to research, verify and check up whether the story is true.

He continues:”Only 12 % of the raw material that goes into newspapers is generated by journalists. The rest is from second hand sources such as press agencies like Reuters or, the likes of Alistair Campbell, PRs. News now is mere recycling.”
Before in Sheffield there were five local press agencies. Now there is just one, ‘Whites’ and they have a much smaller staff, not enough to have a presence in the courts or in council chambers.”

My father ran several press agencies. He trained up generations of journalists and photographers, many of whom are now at the top in TV and newspapers. His agency covered all the local courts. My father retired in the 1990s, exhausted by trying to get newspapers to pay up. Newspapers were only interested in celebrity news, not crime, not what was going on in your local borough, not in what the local council was doing with your money. With the closure of my father’s agency, journalism lost a valuable resource and training ground.

“Nowadays to get court news, journalists check the local police website for cases, download the details, effectively only getting the prosecution’s side. Big corporations use PRs, everybody does. Al-Qaeda is primarily a media manipulation organisation and very good at it too.
There are loads of phony grassroots organisations out there “astroturf groups” they are called in the U.S.A.”
Hill & Knowlton, one of the biggest in the world, are unscrupulous. They will work with anybody. After people were shot in Tianamen square, who rushes in to help the Chinese government repair their reputation? Hill & Knowlton. No PR agency represented the oppressed. Last year they worked on the Chinese Olympics.
PR chooses the truths that they want us to have.
PR has this expression…a ‘Forward note’ is what you tell the press…
So it seems like if we get rid of Rupert Murdoch instead we get Rupert the bear. Stories are picked that will sell the paper, not the important stories.
Even the quality press has to cover [celebrity trivia] stories otherwise people will not be able to join in with the Great National Conversation.”

Nick is referring to ‘water cooler’ stories, a US expression describing the things people in offices will discuss whilst at the water cooler. Here it should be ‘photocopier’ stories or maybe even ‘fag break’ stories. But, back to his point, this is why a serious paper will feel compelled to discuss Jordan or Jade Goody (although the latter has turned into a real subject of interest).

“Another example: the Queen Mother’s death. She, inconveniently for the Daily papers, died on a Saturday. The Observer cleared the front page and devoted ten pages to her death and the ‘national grief’. Except in reality there was a rather a shortage of grief. But…souvenir editions add 20% to circulation “
Barack Obama. Journalists think we want to feel hope. But Obama’s policies are actually of the Kenneth Clarke wing of the Conservative party. He believes in God and Capitalism. If you really want to write about race in the United States you look at unemployment and prison statistics of which a huge percentage are black.”

(Toby Young complained on his facebook status update about Obama getting a ‘free pass’ from journalists.)

“Today” Nick Davies concluded,”newspapers are in crisis, journalists are losing their jobs. There is the electronic model, websites and bloggers, but we can’t earn a living from it. There is no financial model to keep us afloat in the future. The mass media is dying. Mini-media is non-profit.”

We had a little break. My sister arrived and showed me the results of that day’s shopping, holding up a massive bra.

“What size is that?” I ask out of the corner of my mouth.

The bearded ones surrounding us certainly look skeptical about the existence of such a bra size but are defeated by sheer physical evidence.
Questions from the audience.

Davies snorts:”Citizen journalism will fill the gap? Bullshit! It can help. Er…Tweetering… (he pronounces it slightly wrongly)… an editor told me, with the recent plane crash in the Hudson, he saw it reported on Twitter within 2 minutes. Within 4 minutes he had pictures [from Twitpix]. Reuters took 34 minutes to send the pictures.
Bloggers are recycling facts, commenting on stuff. They do not have the skills and resources necessary for investigative journalism. And bloggers have their little communities, everybody in their ghettos”

Question: “Why don’t investigative journalists set up their own websites?”

Davies: “A group of us had a meeting about that in a Soho pub 3 weeks ago. Trouble is there is no precedent for a news website paying for itself. The Guardian has a circulation of under 400,000 a day. It’s website has 26 million users a month. For no money. What do you do? Adverts? Become cocaine dealers?”

Nick Davies also talked about the Amazon invention of the electronic book the ‘kindle’. “We need a mobile waterproof version of that.”

“Murdoch is using his newspapers to undermine the BBC, wants to push it into a corner like public television in the United States. But hopefully it will survive with the license fee.”

Somebody brings up the MMR scandal as an example of false news:

Davies:”The P.C.C. (Press Complaints Commission) are slippery and dishonest. Look what happened to the McCanns. But they sued. Trouble is in this country you cannot get legal aid to sue for libel.”

Davies then, consciously or not, plays up to this skeptical audience:”2012!”as further examples of myth making. “The illuminati! The world is controlled by Margaret Thatcher!” The audience jeers and laughs.

Somebody calls out “It’s true!” to more laughter.

Davies reminisces about working for World in Action. “All those programmes gone. Serious journalism. Now we have that awful News at 10 with Trevor McDonald. Harry Evans, when he was the editor of The Sunday Times, it was the best newspaper in the world. They exposed Thalidomide, Kim Philby ‘The spy that betrayed a generation’.”
“I don’t respect Andrew Neil but he stood up to Al Fayed. PR nowadays doesn’t even have to pay, they walk straight in the front door and plonk their message on the news editor’s desk.”
“Do any of you remember the story about Hilda Morel? A 84 year old rose grower found naked, raped and dead in a field? I reported on that. Even Tam Dalyell said in the House of Commons that she was killed by British Intelligence because of, variously, her nephew, the fact she was due to give evidence about Sizewell, the nuclear plant…
In 1994, ten years later, I reviewed the evidence in a piece for The Observer. It was a burglar. I made mistakes too. I’m not just pointing the finger at others.”

Another questioner mentions urban legends and how he sees them reproduced as fact in the media.

Question: “Aren’t the readers the problem?”

“The Daily Mail is feeding the prejudices of their readers. So yes.”

One man interjected with “So your position is…the majority of modern media is a bit shit.”

At the end another man brought up the McCanns again and also the Joana Cipriano case in Portugal. I’m afraid yours truly got very annoyed and passionately spoke out about media falsehoods but in complete opposition to Nick Davies’ stance.

“I think the Portuguese and their police were maligned by our press. Tony Parsons called the Portuguese police ‘Sardine munchers’…I have looked into these cases quite a bit…”

At that point I was literally booed into silence. I was the sole female voice to pipe up. I felt as if I were in the House of Commons. Nick Davies tried to hand me the mike and gracefully admitted to knowing little about the McCanns case.
Two women came up to me afterwards to mutter agreement and were pleased that at least one woman’s voice was heard. I had the same situation on facebook recently when I talked about the MMR jab. Women messaged me privately to say how much they agreed with me but were anxious about voicing it privately.
There does seem to be a gender divide on certain subjects.
I think, after my gobby display, a man I slightly fancied wasn’t interested anymore. A female with opinions and the cojones to state them in public is a contraceptive device!