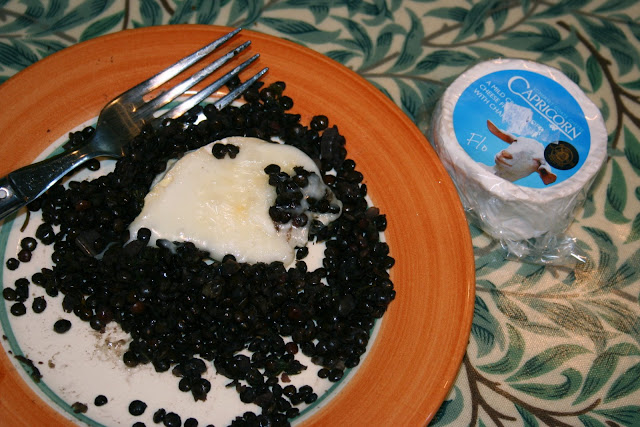 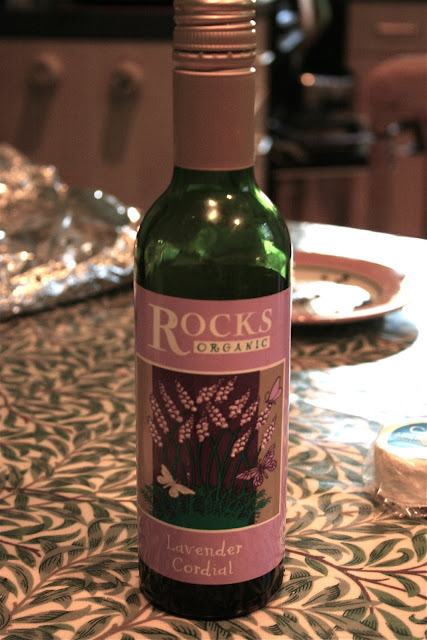 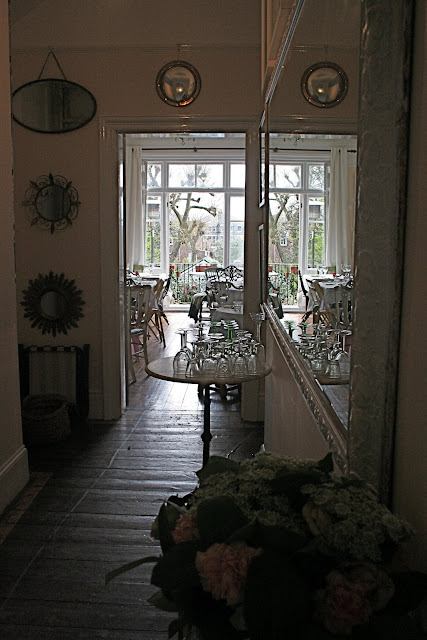 Had to fit 34 people in. View from the hallway. 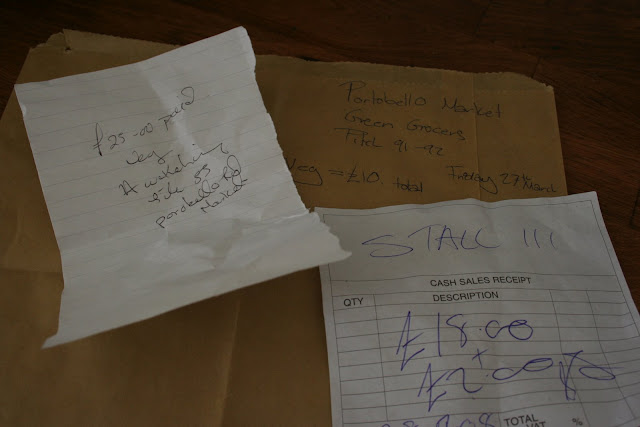 Bills from Portobello rd market. Trying to keep track of all the expenses. 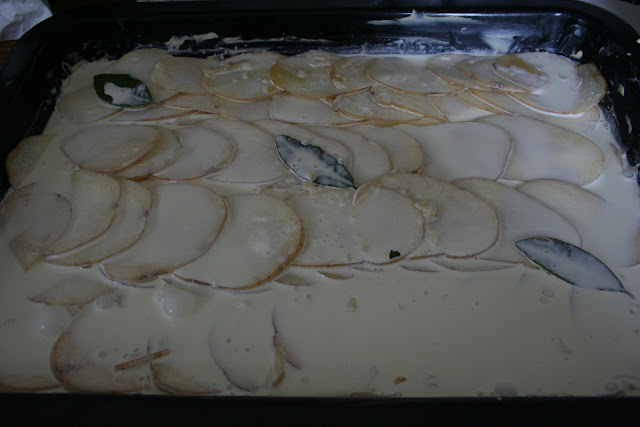 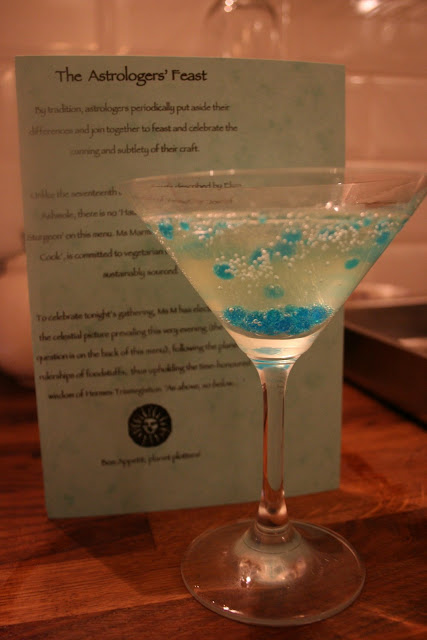 The amazing Aquarian cocktail, with menu behind. 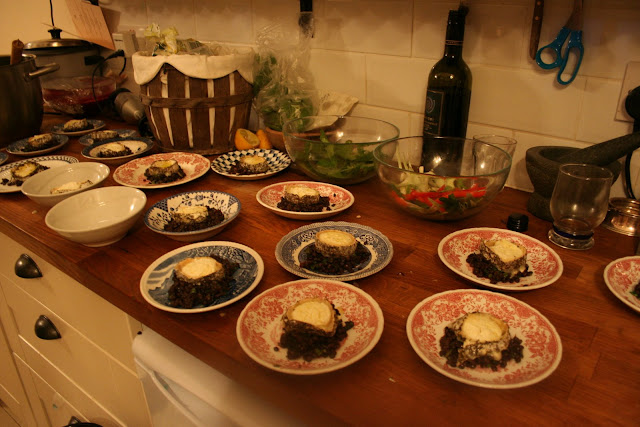 The goats cheese for the Pluto in Capricorn dish, on Beluga lentils, created and prepared by Neil Spencer

Johnny ‘you scratched the surface’ and Jo, my rockabilly front of house.

Neil Spencer gives a packed house an amusing and interesting talk on food and astrology. 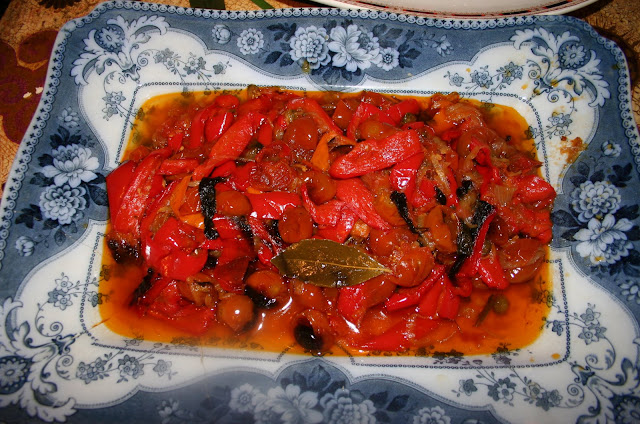 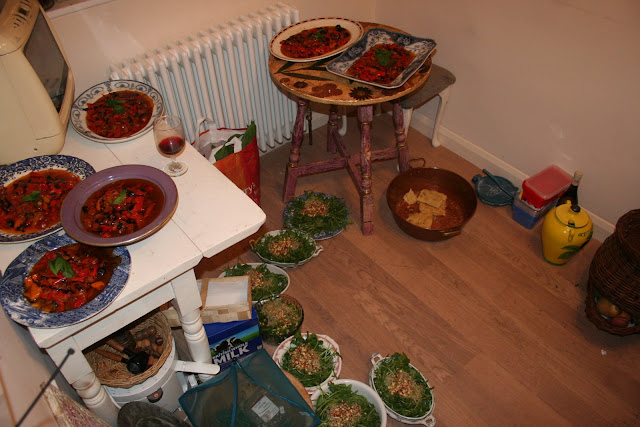 Sometimes I have to plate up on the floor: salad and pepperonata 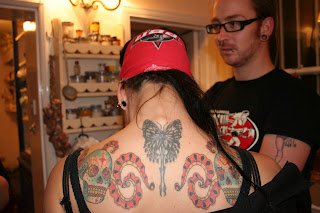 Raspberry Air, the Jupiter in Aquarius ‘cup of exaggeration’ 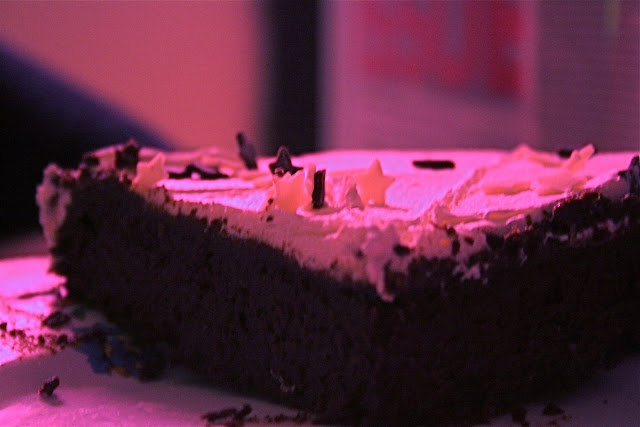 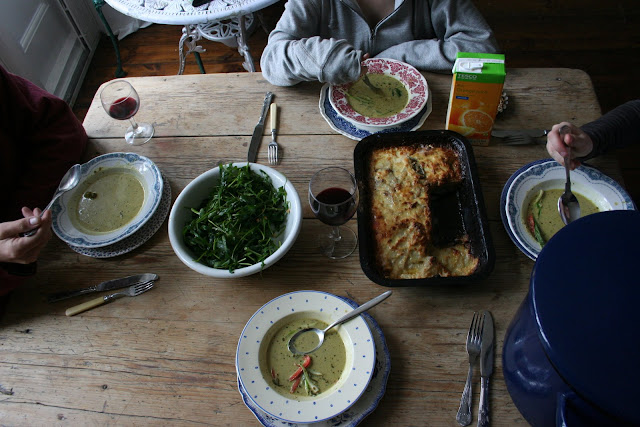 Leftovers being eaten at lunch the next day, thai soup and gratin.
It was fun but exhausting preparing for my astrological dinner, here’s the lowdown:
Tuesday:
Met with Neil Spencer at his house to try out his Pluto in Capricorn dish of goats cheese (Cap) on black lentils (Pluto). Then Neil introduced me to Earth foods in Kentish Town where Gillian, the wine person, gave me some organic wines to taste. Even walking through the shop I felt healthier, invigorated. It had a special smell.
Next we browsed through Phoenicia Food Hall where I bought orange flower water, rose-water, mint water, a big bunch of fresh lemon grass for a quid and a strange Greek substance which I have now lost. Kentish Town is turning into a foodie’s mecca.
We also nipped into A & K Warehouse, which has a great selection of cookware at reasonable prices. We were looking for Neptunian forks for our Neptune in Aquarius cocktail but no luck.
Wednesday:
Chef Roberto Cortez comes to show me how to make ‘caviar’. The original suggestions from Tristan Stephenson was with raspberry ‘caviar’ but I changed that to Blue Curacao which I felt would look more space-age, futuristic and Aquarian plus the orange notes would match nicely with the lemon vodka, Elderberry syrup, lemon juice and Cava.
The process of how to make the caviar is in the post below. I decided to use the raspberries I had bought for the ‘air’ dish. I funked it up by adding some Creme de Cassis.
Thursday and Friday:
Shopping at Portobello market in the morning. Quick break for a coffee and custard tart at Café Lisboa. More shopping, for ingredients for the soup, in the afternoon at huge Chinese supermarket, Wing Yip, near Staples corner.
I receive checks in the post from astrologers who haven’t been organised enough to book in advance. I’m panicking. I literally do not have enough chairs and tables. I start to feel irritated. Myself and Jessica Adams, my psychic/astrologer friend organised this dinner 6 weeks ago at the original price of £15 a head for astrologers. The offer ended 3 weeks ago.
Astrologers, few of whom have bothered to read my blog or understand my project, are now clamouring to get in. Some of them are even lying, pretending they have paid already when they haven’t. Jessica smooths things over and begs me to squeeze in a couple more.
Friday night:
Twitter geeks @Hexayurt, @evangineer and @mikepostcap come over plus their mate Gaz whose wife also does ‘extreme catering’ for an OTO ‘moot’ in a castle ‘Gnosis’. The men help me move a huge table over the balcony into the living room with Hexayurt scientifically directing operations in his Scottish Hindu accent

“this is a problem of mass”

(He has worked in disaster relief and given lectures at the Pentagon). We sit down for snacks and drink. We chat about ‘collapsonomics‘. I should be getting on with cooking. But it’s too interesting.

I met @Hexayurt at the Mayfair school of thought and again at @dougald’s School of Everything. He’s super intense and charismatic. Inspired by the lecture at The company of Astrologers…‘Facing the financial winter’, I’d like to get financial astrologers, collapsonomic experts and forward-thinking political types together to brainstorm at an Underground Restaurant event. Watch this space.

Johnny, dryly:”Shall we kick ’em out in the rain or give ’em a drink?”

At 7.15 pm my parents arrive. My mum is an astrologer, DF Astrol. I can’t even seat them because of the last minute astrologers. My mum spends the night washing up and being snapped at by me. Sorry mum and dad!

7.30pm It’s showtime folks! Almost a full house. I put on some false eyelashes in lieu of mascara. One of them keeps veering off at the corner.

“Try and keep the guests out of the kitchen for the first couple of courses” I tell Johnny and Jo. “They can have a look later”.

I overhear someone say “Do we all have to sit according to our signs?”.

Neil has made beautiful menus for the evening on blue card describing the astrological associations with each course and on the back, the chart for the evening, upon which the menu is based.
The Astrologers’ Feast
By tradition, astrologers periodically put aside their differences and join together to feast and celebate the cunning and subtlety of their craft.
Unlike the seventeenth century feasts described by Elias Ashmole, there is no ‘Haunch of Venison’ or ‘Jowl of Sturgeon’ on this menu. MsMarmitelover, being an ‘Aquarian Cook’, is committed to vegetarian fare, wholesome and sustainably sourced.
To celebrate tonight’s gathering, Ms M has elected to cook the celestial picture prevailing this very evening, following the planetary rulerships of foodstuffs, thus upholding the time-honoured wisdom of Hermes Trismegistus: ‘As above, so below…’
Bon Appetit, planet plotters!
Menu
Neptune in Aquarius
A divine draught of sparkling wine, tinged with Neptunian mystery
Saturn in Virgo
Seeds and grains fresh from the sheaves of the corn goddess
Uranus and Mars in Pisces
A spicy oriental soup using the red chillies and garlic of Mars, splashing down unexpectedly, in Uranian style, from Thailand.
Pluto in Capricorn
A roundel of mature Sussex goat’s cheese on a dark bed of beluga lentils
Sun in Aries/Moon in Taurus
Specialite de la maison: Pommes Dauphinoises with full dairy cream, representing Luna, crowned by a blaze of solar rosemary
Mercury in Aries
A frisky salad of peppery rocket and spring shoots. Plus a dashing scarlet peperonata
Jupiter in Aquarius
An audacious dish in honour of The Lord of Abundance. Fruity and airy, add your own optimism.
Venus retrograde in Aries
A pudding of Venusian chocolate to recall the sensual delights of old love affairs, and to cheer the sweet-toothed goddess as she dallies through detriment in Aries, en route to exaltation and renewal in The Fishes.
My friend psychic Michelle Knight came. She, originally a Somers Town single mum, has pulled herself up by her bootstraps and made a fortune partly by writing a “‘miz mem’, in the Sunday Times best seller list it was” she informed me.

“It’s a misery memoire. All about my childhood. It’s called ‘Touched by Evil: A Childhood Survived Against All Odds'”

She brought along two minor slebs: the warm and friendly Anna Richardson currently presenting a Channel 4 programme on sex education, and slightly raddled Trisha Walsh-Smith, the ‘YouTube’ divorcee. Trouble is I rarely watch TV so I didn’t recognize either of them.
I did check out Trisha’s YouTube videos and they are amusingly outrageous. You can sense her desperation, the injustice of her situation. She has written a musical wittily entitled ‘Arm candy’. During the evening, I put it on the iPod speaker. It’s electro-pop. The astrologers looked annoyed.
Hierarchy
When you go to a restaurant you are playing with hierarchy. You, the customer, are the Lord and Lady. The staff are the servants, bowing and scraping. Obsequious behaviour is the order of the day, more so in expensive restaurants. Even when you host a dinner party at home, there is an element of this artificial behaviour. You put yourself out for your guests. You serve them. Clear up after them.
A home restaurant blurs these lines. It’s my space which is, of course, like anybody’s home, sacred, private, personal. On Saturday night I felt outnumbered in my own home. I really missed my sister. She would have controlled them.
To be brutally honest I didn’t feel like they respected me! At one point I went out to the balcony to tell the smokers that the next course was served. They ignored me and the course. Some people were imperious to the staff, acting as if they were in a normal restaurant.

Johnny observed that the astrologers, for instance, were “competing with each other”.

The atmosphere was that of an office party. The astrologers didn’t ‘get it’. One ‘princess’ asked for her bottle of white to be kept in the fridge, in between glasses.

Jo was trying to find room in the fridge and I said: “No. This is a home restaurant. We don’t have the room. Tell her to fuck off.”

Once again the issue of valuing yourself, what you do, rose its head. Some people who had not pre-paid, for themselves, did not turn up. They didn’t care that others, perhaps more motivated and interested, could not come as a result.

“Did you enjoy it?” I asked one woman as she left.

She glared at me then spat:  “No. I missed most of it. And I hate chocolate.”

I was speechless. Was it my fault that she arrived late (and drunk)? The real issue was that she didn’t get to sit with her friends. Mixing with others is part of the charm of a home restaurant. First come, first seated. You have to ask your friends to save you a place if you want to sit with them.

No astrologers apart from Michelle Knight left a tip.(It’s significant that people who are poor or who’ve known poverty are always the most generous). Earthy behaviour from celestial types…
Petra chocstar’s van outside looked magical, twinkling pinkly like a secret cave in the dark. The negre en chemise was yet another treat for the guests. Neil Spencer wants to write a children’s story based on Petra’s chocmobile.
On a culinary and cultural level the evening was a tremendous success. It’s certainly a steep learning curve this restaurant.
The chart of the evening Sun, Venus, Mercury (competitiveness) are close together in Aries in the 6th. Work. Service. Squaring my natal Mars.
Pluto squaring it all from the 3rd house of communication. Power stuff. Moon which represents the people, in 7th house of partnerships/open enemies. Opposite my natal moon at 5 degrees of Scorpio. Saturn in the 11th, barriers going up between people.
Composite of my chart and the chart of the evening: Pluto/Saturn in 1st house in Scorpio, intense competition. Four planets in Aquarius. T square to Sun/Merc from Uranus/node. Very cliquey.