Petra Chocstar in the chocmobile parked in my driveway Pic: Frank Preuss 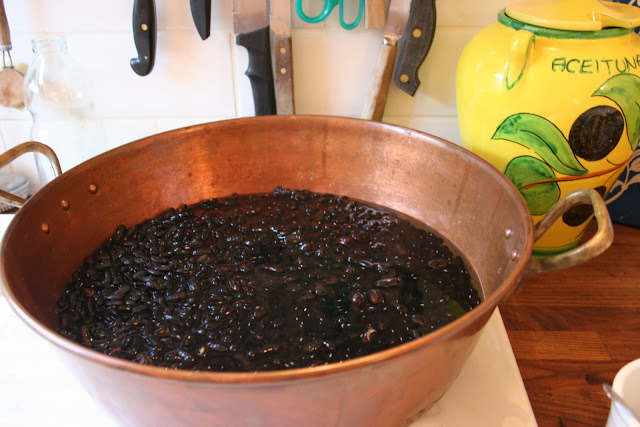 Preparation started on Thursday evening: for the chili sin carne, I power-soaked the dried black beans. You bring water to the boil, add the dried beans, boil for 3 minutes, take the pan off the heat and, keeping the lid closed, leave for 2 or more hours.

My sauce base consisted of olive oil, onions, tomato purée, organic tinned tomatoes. I bought some Pasilla and Chipotle dried chilies, cut the tops off, emptied them of seeds then soaked them in hot water for 15 minutes.

DeseedI blended the chili and water mix with jaggery cane sugar, a bar of dark chocolate, salt, vegetable oil. This was added to the chili sin carne base along with some ground cumin and garlic. In this case, as I was making such a large amount, I added some more dark chocolate. In the end you have a slightly spicy, sweet, tangy rich sauce. However by Saturday afternoon, having cooked the beans on the simmer plate of the Aga all Friday evening and Saturday day, I still felt the beans could be softer. I should have started them on Wednesday perhaps? 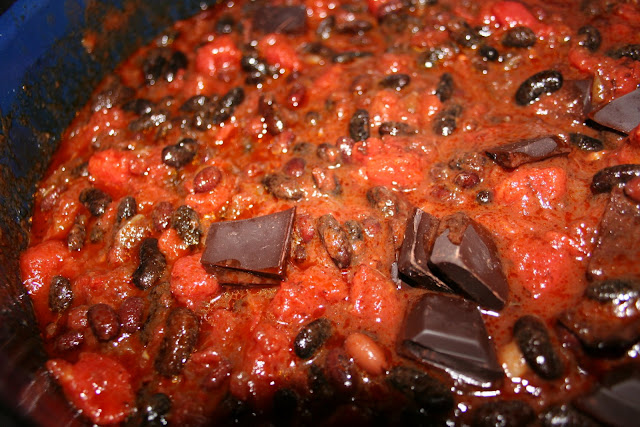 Cubes of chocolate in the Chili

Friday evening was spent making up tortillas with specially treated Masa harina flour bought from the coolchile.co.uk. I mixed blue and white harina flour with warm water, kneading until my dough was clay-like. I then formed small balls which, after covering both sides of the tortilla press with oiled greaseproof paper (the oiled sides enabling the paper to stick to the press), I placed in the middle of the press. You pull down the lever of the press, flattening the balls into a little circle. I then rotated the circle, pulling down the lever again, to ensure that all sides of the tortilla were equal in thickness. I made about 60 on Friday evening, interleaving them with greaseproof paper, keeping them in the fridge overnight.

Also on Friday evening I intended to make a mango, spring onion, mint and lime salsa plus a roasted corn salad with roasted red peppers. Due to a momentary lapse of concentration I mixed the two. Hopefully it was ok. They were supposed to be two separate dishes.
Thursday I went to Wahaca in Covent Garden where I had a perfect chipotle ‘cooked’ salsa and taquitos with mushrooms and cheese. This is Thomasina Miers’ Mexican restaurant. My teen and I were rooting for her when she won the first series of Masterchef. Thomasina’s business partner Mark had booked for my Mexican night. Talk about pressure! Having problems locating fresh Jalapeno chili peppers, Mark had kindly arranged for MsMarmitelover to pick up 2 dozen from Wahaca.
Saturday morning I had to take my daughter to her music group. Returning about 1.30 pm, I made my guacamole. Crushing tens of avocados with lime juice, salt, finely chopped red onion, and fresh coriander. I added one grilled deseeded finely minced chili pepper.
At around 4pm Helen who writes the food blog World Foodie Guide came to help out. I set her to dicing tomatoes for a fresh tomato salsa.
By this time I was wondering how to make the most of the Jalapenos. I decided to make a version of Jalapeno ‘poppers’. I blanched the Jalapenos for 2 minutes. Leaving the stems on, cut them in half lengthways and deseeded them. The insides were filled with a cream cheese and cheddar cheese mix. Usually to make poppers, you coat them with milk and breadcrumbs and fry them. Knowing I had the tortillas to toast that night and only having one high heat hot plate on the Aga, I oiled a baking pan and baked them instead. They turned out just great.
Around 6pm Johnny arrived to do front of house. He is a tongue-studded, black clad ginger Russell Brand figure. Johnny and Helen started to salt the rims of glasses in readiness for the Margaritas which I had mixed in jugs according to cocktail king Tristan Stephenson’s twitter recipe: 2 parts tequila, 1 part triple sec or cointreau, 1 part fresh lime juice. Tristan’s recipe also called for a little cane sugar syrup but as I had used Triple Sec (£6 a bottle as opposed to £19 for a bottle of Cointreau) which is sweeter than Cointreau, I didn’t bother with it.
I like my Margaritas tart, and on the rocks rather than frozen. The tequila I used was aged and amber, Anejo Hornitos, courtesy of Aroundbritainwithapaunch (who of course doesn’t have a paunch) so smooth, perhaps too good for cocktails, better for sipping.
Charlie Nelson who has helped me in the kitchen for the last two weeks was mainly coming as a guest this time, although I think it was quite hard for him to remain seated. I’ll be interested to get some feedback from him about the experience from the receiving end.
Petra of Chocstar arrived around 7pm, squeezing her chocmobile van into the driveway, threading her power lead through my bedroom window.
Inspired by Mexican street food, I made some popcorn as a nibble but mixed with fresh lime juice, melted salty butter and some chipotle sauce that I brought back in a plastic water bottle from Mexico.
Just before people arrived, I managed to snatch 5 minutes to put on my make-up and heels. It’s a classic problem with dinner parties; you spend all day cooking and end up greeting your guests with no make-up and in your undies. 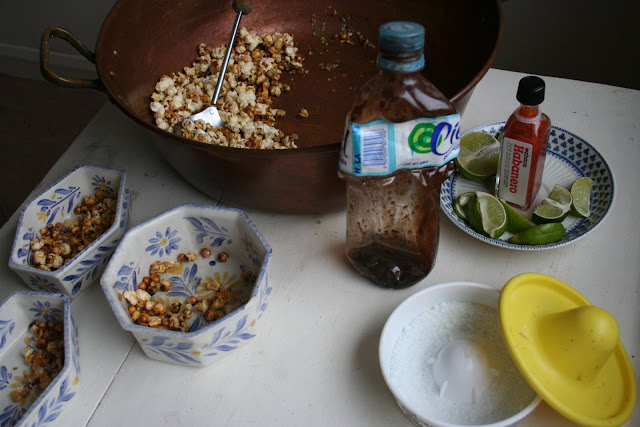 Popcorn and chili sauces
Tonight we had German press; the photographer had a creative solution to not identifying me in his photographs: he took a picture of me holding a saucepan in front of my face. My sister reenacted for me later the “popcorn titty shot” that she did for him…her cradling a large copper pot full of popcorn just underneath her 34″ double ‘H’ cups.
The celebrated ‘popcorn titty’ shot. Pic: Frank Preuss
At 8pm I check my emails; Rosie Millard of The Sunday Times sent me a desperate message at 4pm

“Don’t have your address. PLEASE message me soon!”.

I think we had gotten so busy emailing back and forth about her husband’s forthcoming home restaurant I had forgotten to give her this vital information.

Panicking slightly, I email, text and leave a message on her voicemail. Eventually I get a response…

“Thank you, be there shortly”.

This week I gave up on Paypal and put the event with Wegottickets.com. A relief! I can now spend less time on admin and bookings. Things should go more smoothly.
Rosie arrived with her husband saying the key phrase “we’d got babysitting for this!” Feeling guilt stricken… free bottle of wine for them!
This was however the period of time that I was supposed to be toasting the 60 tortillas, a slow job when you only have one rapidly cooling hot plate. But it was worth it, for Petra came in and said:

“the whole flat smells of Mexico”.

The Aga has been put through its paces over the last few weeks. The temperature does start to drop when all 3 ovens and both hot plates are in use.

As one guest noted that evening:

“…cooking for a restaurant on an Aga…it must be really hard…in fact it’s insane…because the Aga is the ultimate in ‘Slow food’…you can’t just blast something at the end”.

A woman arrived from Dublin (wearing a stylish Yves St. Laurent coat bought on eBay for £70) purely on the basis of my Irish National Radio interview.

“I heard it and got on my laptop immediately, I must book it!” she said.

By this time Chocstar’s red stiletos, my black patent wedges and Sister-woman’s mules were starting to make our feet hurt. Dublin woman pointed to her flat suede clogs and said ” Girls! you need a pair of these!”
Mark of Wahaca also brought a little gift for each table, a bottle of Wahaca chili sauce made from Devon chili peppers.
So… the final menu:
Margaritas
Lime/chipotle popcorn
Fresh tomato salsa asado
Guacamole
Roasted sweet corn/mango/ spring onion salsa
Tortilla chips
Chili sin carne with chocolate and Chipotle
Brown rice
Melted cheese
Sour cream
Baked Jalepeno peppers stuffed with cream cheese and cheddar
Freshly toasted corn tortillas
For dessert people trooped out to Chocstar‘s chocmobile, lit up with fairy lights, for their spicy chocolate mousse. Unfortunately your hostess by this time was a little the worse for wear having seen fit to drain the remnants of people’s Margarita cocktails. So I missed the dessert section…got no pictures. If anybody has any pictures please email me. I tasted some of the mousse though and it was beautifully rich.
I made coffee for everyone and handed it around, taking this opportunity to chat to a few tables.
After everybody had left, tonight’s team hung around the Aga, drinking red wine and cognac, discussing the evening. Petra of Chocstar asks my sister and I:

I answer “Our parents had sex” and my sister answers “Our parents introduced us!” I guess I never had the chance to mention that we were related.
Another memory: Johnny, aside from enjoyable bickering with my teen about how he is “old” at 29, gave us a fascinating blow by blow marketing analysis of the evening from a front of house point of view…who had seconds for instance. Johnny’s other half will come along another time.

“Drink gin and make wallets out of tape” he shot back.

He then showed us this beautifully crafted black wallet made out of gaffer tape. It looked like crocodile skin.
Leaning against the Aga in time-honoured style I kicked off my shoes. By this time I had lost my voice. I declared that I was going to bed and would the last person to leave please lock the doors. 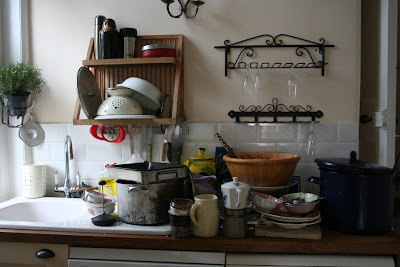 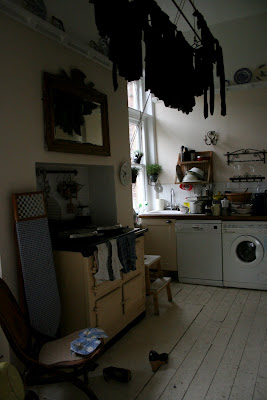 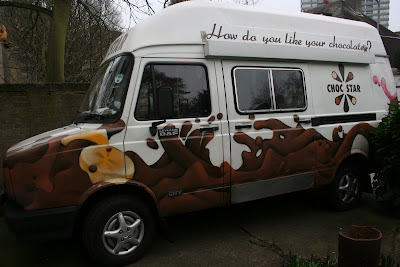 Chocstar’s van in my driveway this morning. 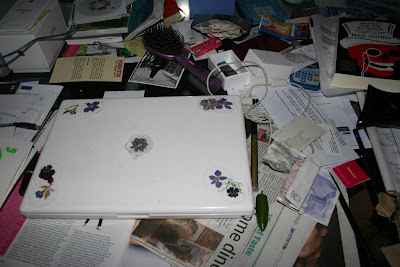 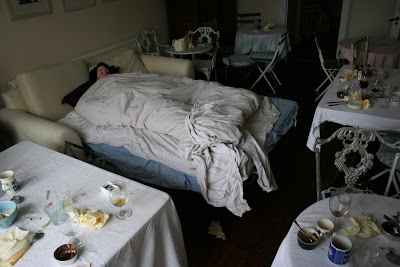 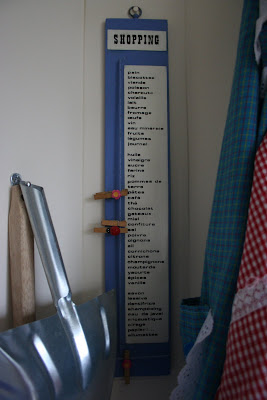 My mum doesn't even like beans, but she said this was the best she ever had. Cumin is an essential spice for Mexican cooking I find.
Course Vegetarian main course
Cuisine Mexican
Keyword Beans, Chilli sin carne, Mexican food, Vegetarian
Serves 10