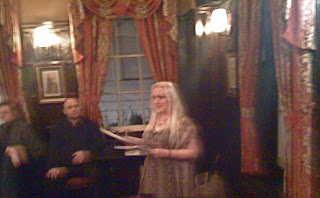 The Moot with No Name, Devereux pub, Strand. Subject: Sin-eaters by Shani Oates.
Intrigued by this subject I took a friend, saying the people at the Moot with No Name are some of the most interesting and knowledgeable people I have met in London.
Unfortunately Shani read her ‘talk’ from a large wad of papers using complex and academic language. It was hard to follow. You could see the packed room’s attention wandering.
I only started to make head or tail of it when we were allowed to ask questions. Steve Wilson, the MC of these talks, announced that Shani was the first person from the Robert Cochrane tradition to speak at the moots. Steve Wilson ominously requested that people not ask about ‘lineage’. The room, full of the usual assortment of tricoteuses, witches, Shakespearean speaking frog-like creatures, long haired tailors, beady-eyed astrologers and other marginals, grumbled in response.
Robert Cochrane, originally from a strict Methodist background, claimed to come from a line of hereditary witches. He practised from his council home in London and elsewhere. There seems to have been some inter-coven rivalry with Gerald Gardner another hereditary witch (who spent much of his life studying local traditions in Malaysia) before returning to England to work eventually with Aleister Crowley. He started an affair with one of his coven, in front of his wife Jean, and grew fond of ‘witches potions’ (psychedelic drugs to you and me). He eventually committed ritual suicide, drinking belladonna, at the summer solstice of 1966.
The celebrated witch Doreen Valiente(1) one of his followers, became disenchanted saying

“cease to have silly bickering between covens, because they happen to do things differently from the way we do them. This incidentally is the reason why I eventually parted from Robert Cochrane, because he wanted to declare a sort of Holy War against the followers of Gerald Gardner, in the name of traditional witchcraft.”

One of the main problems for Gardner, and is no doubt still an issue, is that the OTO was gender imbalanced, 80% to 20% women. The women were frequently reluctant to participate in the ‘Great Rite’ (sexual intercourse) on the altar. Spoilsports!
So with a little post-lecture research I have managed to make some sense of the talk.
Shani talked about the relevance of Sin-eaters to ‘the craft’, how sin is ritually dealt with via confession, expiation and purification.

“Sin” states Shani “has long been recognised as undesirable. No one can be responsible for the sins of somebody else but this is exactly what Sin-eaters do”.

Traditionally each village would have a Sin-eater, often beggars, who, by eating food and drink placed on or over the body of a corpse, would consume/remove the sins of the corpse. They, along with other professions such as tanners, were pariahs, untouchables kept on the outskirts of society.
Adam Dilwyn Vaughan was the last known Sin-eater, living in Hereford in the 1960s. Richard Munsloe, a Sin-eater in Shropshire, enjoyed as his payment warm cake and spiced ale.
Soul-caking(2), funeral biscuits in Shropshire, corpse-cakes in the Balkans, the Dutch dead-cakes, burial cakes (still made in Lincolnshire and Cumberland) all derive from Sin-eating. Similarly in Cornish custom, children were encouraged to kiss the corpse. In the Andes, we see Tlazolteotl, a purification goddess,”eat the filth” of a corpse.
Salt and smoke would be used in the ritual, denoting healing and absolution. Fire and candles feature heavily in funerals, and the word derives from the Latin ‘funeralis’ meaning torch. It is taboo to light anything from a corpse candle. All attendees must carry salt in their pockets.
Salt represents many things:
Salt is used in all the higher magical orders. But it is rumoured that some witches reject salt.
Other techniques used include ‘dry retching’ into a cleared ground, to suck out energetic debris from places of congestion in the body, to get it out of the system. ‘Corpse silver’ is given over the body, silver being a powerful conductor. The face of the Sin-eater is covered in black ash.
At the end of the talk Shani rejected the idea that eating sins had any deleterious effect on the Sin-eaters health.

“What is sin for you?” asked someone

(1)Doreen Valiente also believed that the future of paganism and the craft in “the age of Aquarius, lies in feminism and Green issues associated with the environment” (quote from http://www.controverscial.com/). It seems to me that Stawhawk et al, with their activities at the anti-G8 camp, are pursuing Valiente’s legacy.
(2)”Soul-cakers would go to each house, singing either a begging song or a plea for prayers for the dead. They would put on a mummers play for the residents of the house, which would consist of a challenge, a battle, a death, and a magical revival. Specially-made cakes were given to the Soul-cakers at the conclusion of their performance. Soul-caking is still the custom at Antrobus, in Cheshire, but there has been a change or two. Instead of going house-to-house, the Soul-cakers go pub-to-pub, by car! Leaving cakes and wine out for visiting ancestors is also an old custom that has carried over into many British households, even today.” From Cyberwitch.com