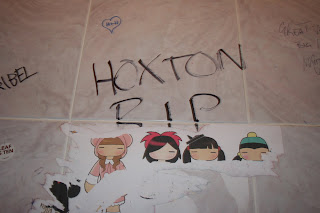 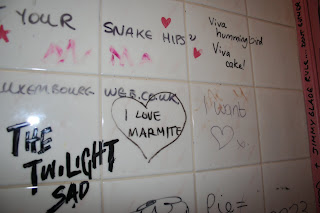 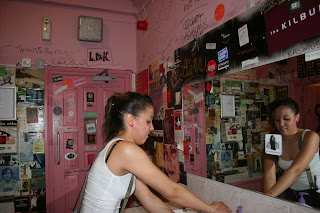 Kilburn and the High Road have a gritty rock ‘n’ roll history. Aside from being the name of the late great Ian Dury’s band (Kilburn and the High-Roads), this area, essentially the A5 or the old Roman Road, Watling Street, has always hosted a variety of music venues.
Traditionally this part of town has been Irish: ‘County Kilburn’. The newsagents still sell Irish newspapers and some venues, Powers Bar (Vince Power’s tribute to his pub rock days at The Mean Fiddler) and further up in Cricklewood, The Galtymore, retain an Irish influence.
I remember staggering up the dark hill in my punk gear to see various ‘pub rock’ bands (Madness) in the ’70s, kipping down the night in squats. The next day you’d stumble into a working men’s café for breakfast, the seedy atmosphere permeated by Irish men spending Sunday on their own, far from their families, there to earn a few quid in the building trade. The loneliness came off them in waves, their only comfort pints of Guinness in the evenings. This was the era when the IRA were recruiting, collecting donations in Kilburn pubs.
Lingering in a twilight world of inner city grime, before London teeters over the edge into suburbia, Kilburn has come up in the world with the addition of nightspots like The Luminaire, winner of several awards for best music venue. Downstairs is the pub The Kings Head, the monarch being Elvis, which boasts the toughest pop quiz in town every last Wednesday of the month, hosted by Charlie Ivens.
Outside The Luminaire you will see an enormous bouncer perched on a stool, reading, what looks like, in his hands, a miniature novel. Yes, it’s the kind of place where the ‘security’ can read. Once you enter upstairs, The Luminaire is a surprise; plush, cosy and intimate. Red velvet curtains all around give it the air of a speakeasy. On the wall, a no nonsense notice tells you ‘Quiet please, we are a live venue not a pub. If you’ve come to chat to your pals when the bands are on, you are in the wrong place, please leave.’
Tonight an astonishingly accomplished band, considering their youth, Two Spot Gobi, are playing, with clear influences of The Police and Jamiroquai. I hadn’t planned to see them, but I get the feeling you could drop into The Luminaire on any given night, and the music would be good. This singer has a raw passionate voice and the musicians, including a cello player and some brass, are sublimely talented. It is impossible not to dance.
The sound at The Luminaire is perfect and the stage well lit. This venue puts a spotlight on performance with no distractions. And the toilets are…amusing; graffiti is encouraged. One felt-tipped message reads: ‘Hoxton RIP’. With places like The Luminaire in Kilburn, lets hope so.
The Luminaire 311 Kilburn High Road Kilburn NW6 7JR Tel: 020 7372 7123