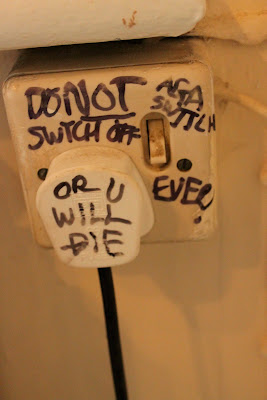 No sleep. Wake up. Crawl to Tescos in bashed up van, didn’t remember to order from cheaper/better places. Bleary eyed. See veggie haggis for sale. Think sod it, I’m cheating, I’ll buy it, not make it. Never cheat normally. Whole point of restaurant is not to cheat. Get home. Unload van. Toast oatmeal for Cranachan dessert. It’s taking forever. Look at Aga temperature dial. Heart stopping moment: FUCK FUCK FUCK FUCK. It’s not working. It’s OFF. Whaaaat! Look at ‘Do not switch this off or you will DIE’ plug: it’s on.

Brain slowly whirrs. Um, fuse? How do I change plug fuse? Is this something I know how to do? Can’t remember, been long time since I did it. Do I have any fuses even?
SHIT SHIT SHIT SHIT
Ring Laura James of Aga who is a friend. A man answers. Sounds very officey even though I know it’s their home. He sounds, erm, a bit testy that I’m calling him in Norfolk about my Aga in Kilburn. As well he might be. But I’m in no mood for logic. Eventually I ask if he is Laura’s husband, he says yes. He says Laura coming home tomorrow. Why don’t I call the local Aga shop in Marylebone. BOLLOCKS BOLLOCKS BOLLOCKS
Go to laptop. Look up Aga number. Call it. Woman answers and I can’t understand anything she is saying. I know she is speaking English but my brain, stalled by fatigue and panic, won’t work properly. “Do you normally get serviced by Aga?” she says. I ask her to repeat this. It feels like the most stupid question in the world. Yes, I reply dully, of course I do, I’ve got an Aga. Who else would service it? British Telecom? “Madam, it’s just that some of our customers use other companies to service their Agas. Anyway we can get a service engineer out to you tomorrow”…she says, tapping on invisible computer keys.
I’m now hyperventilating. TOMORROW AFTERNOON? I’VE GOT 30 PEOPLE COMING FOR DINNER TONIGHT! AND THEY ARE SCOTTISH! I screech. This seems to work. She asks lightly “have you tried reigniting the pilot light?”. Pilot light? I think. There is a pilot light? HOW DO I DO THAT? I wail.
“The instructions are on the door” she says in that ‘I’m not going to nurse you through this’ way. Clenching my iphone to my ear with my shoulder, I open one of the oven doors that doesn’t contain an oven. I’ve never looked at it before. There are wires and switches. On the back of the door there is a metal plate with instructions and drawings. It looks a bit like a boiler and I think there probably should be a flame inside the little window. There isn’t. The Aga lady is still talking to me, albeit muffled…there is no flame I say. “Maybe the wind blew out the pilot light” she says. “Were there strong winds last night?” I look wildly around my kitchen, thinking how can the wind blow out a flame indoors? encased in a cast iron oven? This makes no sense!
I start flicking at switches, I see something on a dial saying ‘ignition position’. HAHAHAHAHA by doing this I make a flame…I’ve reignited the pilot! I’VE DONE IT!!!! I’VE ‘FIXED’ THE AGA!!!
Limp after this rush of adrenalin, I hang up on the Aga lady. I’m now fully awake. But I have to wait several hours before the Aga is heated up again enough to cook dinner. 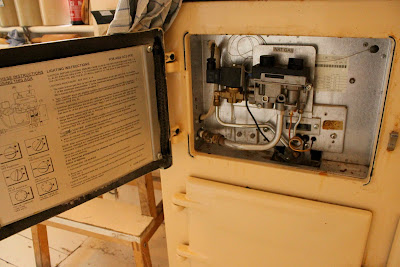