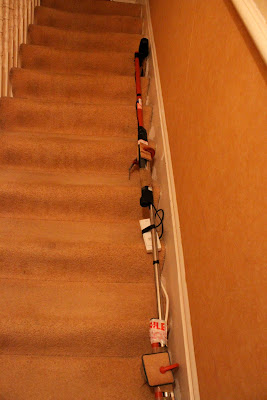 The mysterious instrument on the stairs… 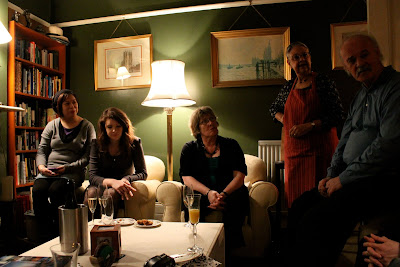 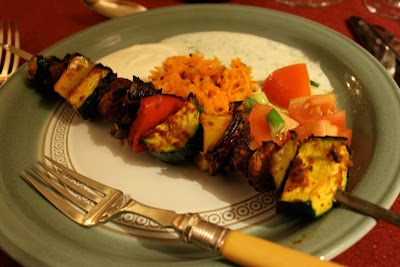 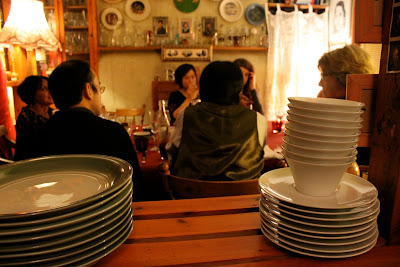 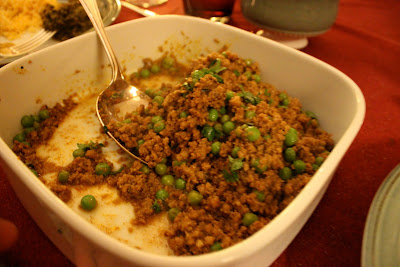 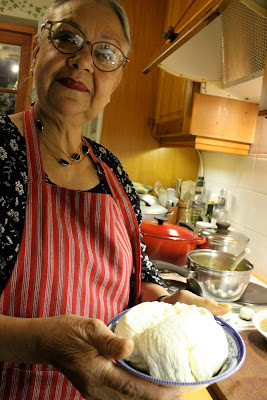 Rani showing off her fresh home made paneer 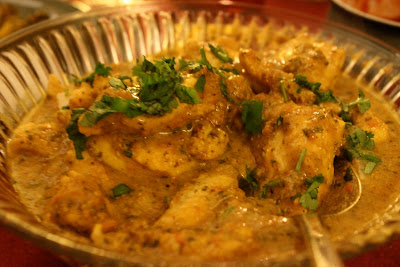 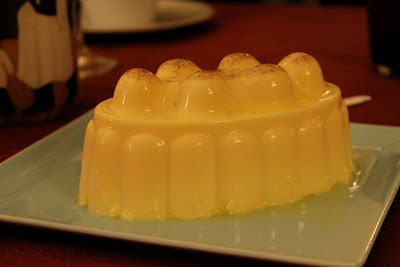 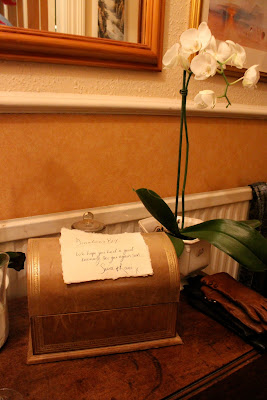 Three supperclubs that couldn’t be more different but all worth visiting: the first at an Indian ‘amma’s’ in Tufnell park; the second, a chic molecular do in an architect’s bachelor pad in West London; lastly, a stylish duplex off the Holloway Rd.

Joginder’s Supperclub is run by a mother Rani (cooking) and daughter Saira (front of house) team, at times aided by dad Graham. Eight guests sat by the fire in the living room, eating freshly fried onion bhajis with a glass of champagne. As we are led downstairs to the dining room dad points to a strange object on the stairs

“What do you think that is?”

We spend the rest of the evening trying to guess. (1)
It’s a pleasure to eat home cooked Indian food, with home-made paneer and ground spices. We start with vegetable kebabs and sauces. For the main course I am assured by the meat eaters that the lamb curry is superb, certainly the fish bhuna curry is well seasoned and creamy. Rani made us roti and we ate family style, with a large selection of dishes. My only complaint is that much of the food was undersalted and Rani confessed that this was because her husband needs a low salt diet. The best solution to this is to put good salt on the table, a suggestion she took on board for the future.
One of my favourite parts of the meal is when they bring out a beautiful glass jelly mould, turning it out as a cardomom flavoured blancmange (Phrini). I mentioned that the glass mould brought back memories of my mother’s rabbit-shaped tin mould, a special treat as a child and everybody at the table had similar stories. No one eats blancmange (pronounced blermonje in my family) anymore.
Joginder supperclub, Tufnell park
£20 a head donation 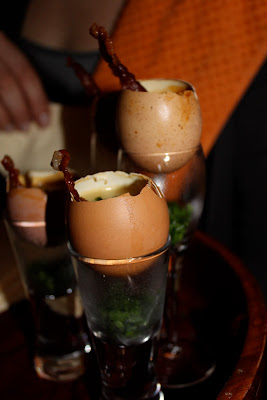 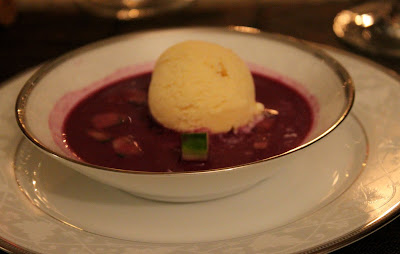 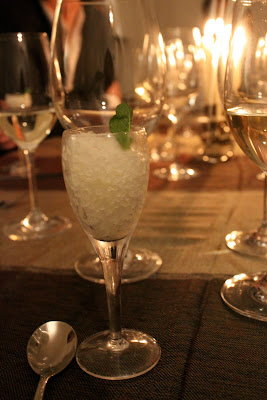 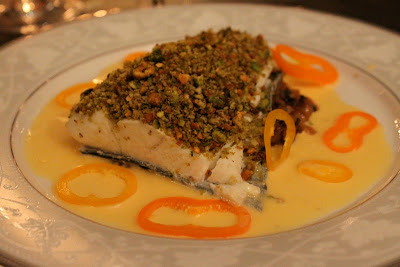 Halibut and pistachio crust, accented by a zingy lemon sauce 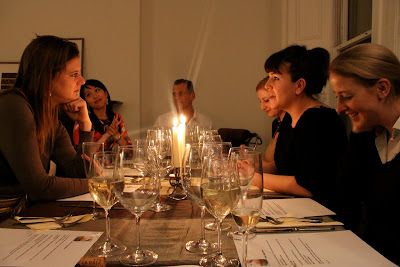 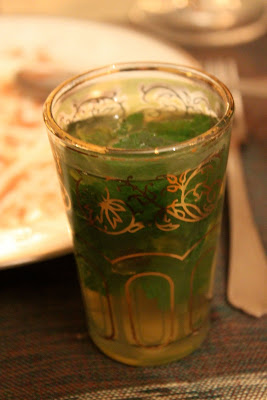 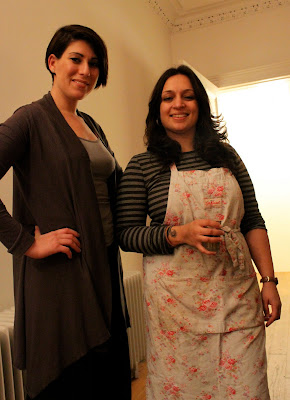 Jill and Faiza
Urban Sage Supperclub on the other hand was quite a swishy affair. American Jill Richmond and cook Faiza, have borrowed the flat of an architect friend near Lancaster Gate. I enter a large Georgian room and we are given drinks and an unusual amuse-bouche of truffle custard served in an egg shell.
The guests are well off, highly placed in their respective industries (World Bank, TV, Skype, Google ect) mainly in their 30s and 40s. The food is experimental, plated restaurant style. The first course is a red cabbage gazpacho with mustard icecream. An interesting combination, the icecream certainly cleared the sinuses.
Then we have a little palate cleanser of unsweetened lemon granita. With each course you are served matched wines.
The main course is poached halibut topped with a pistachio gremolata, and underneath an onion confit. The fish is very fresh and well cooked. But afterwards I suddenly realise I am hungry. There have been absolutely no carbs in the meal. No bread, no potato, no rice. I feel light-headed and ask for a piece of bread. They don’t have any. This would be my main complaint about the meal. If you were on an Atkins diet, or any diet, well, this is the supperclub for you. I can’t drink alcohol without carbs.
For dessert there is good ginger icecream with poprocks chocolate discs (delice of chocolate) and cumin caramel. I couldn’t really taste the cumin, perhaps I needed more sauce and the chocolate dessert was not sweet enough for me. We were served mint tea which is lovely but again, without sugar.
The location, guests and front of house is delightful but I would love to taste Faiza’s home cooking. She has done a cordon bleu course but comes from the East. I’d be far more interested in cooking from her homeland. But that’s only my opinion.
At the beginning I got talking to an attractive woman, now I was sitting next to a charming man that seemed to accompany her. I asked him, just for something to say…

“is she your girlfriend?”

“No” he responded “she’s my mistress”.

I guffawed then realised he was deadly serious. He also had a wife. He takes them out on alternate nights.

“You are a very naughty man” I said. He twinkled.

I got chatting to the mistress in the kitchen later, she said lightly they came to this supperclub expecting to put car keys in a bowl at the end. She said it was great being a mistress, they’d been together six years…

“much better than being a wife” she told me “you get lots of presents and don’t have to do the boring stuff like laundry”.

She showed me her undies from Agent Provocateur. I mentioned jokingly that I might need chemical help to get through the midnight feast I have planned in February.
As I was walking past the toilet, the woman yanked me inside. Two lines of coke were streaked across the toilet seat. I don’t do drugs, never have. I much prefer a cup of tea. But I liked her and didn’t want to look stupid and uncool. Peer pressure in my 40s! So I slipped the proffered twenty pound note up my nostril and snorted a line, internally crossing my fingers I wouldn’t have a Woody Allen moment. Mission accomplished, I was suddenly wide awake. To be honest this was an inconvenience as I just wanted to go home to bed, having done my own supperclub the night before.
Once I got home, wired as fuck, the teen was sat in my bed watching tv. I told her what happened. Her eyes widened, she sniggered slightly and said

I can’t guarantee you’ll be offered class A’s but you will certainly have a great time at the Urban Sage Supperclub/Number68 project
Different locations.
£50 a head without wine £55 with matched wines. 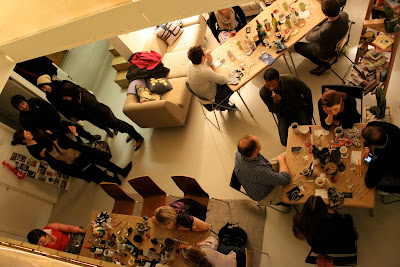 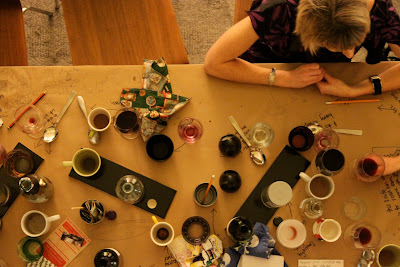 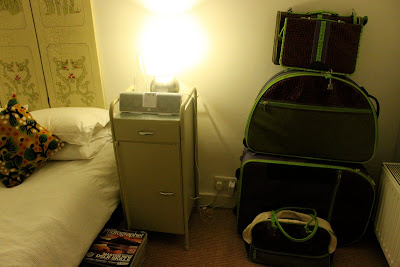 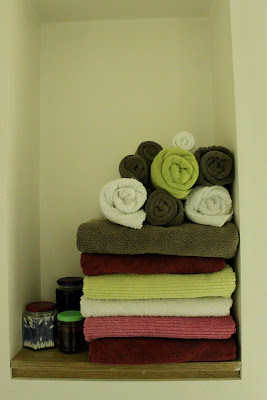 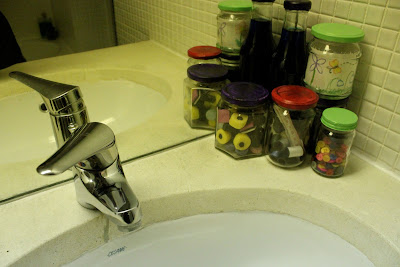 Er…buttons and liquorice allsorts in the bathroom… 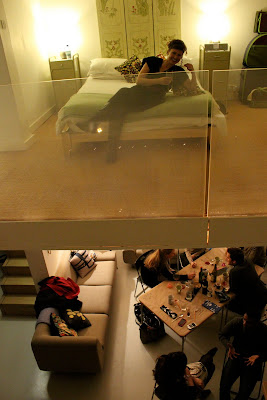 Alexis hardly did a thing all night…just lounged around in her bed…;) 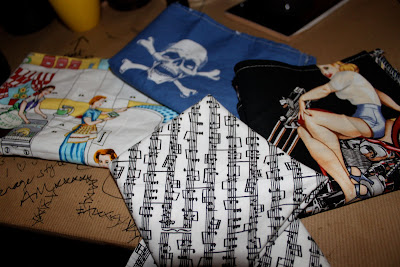 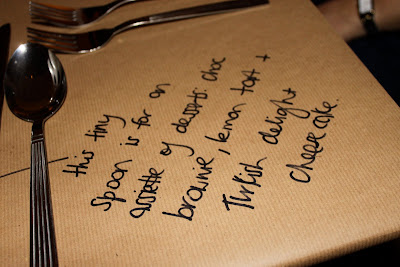 Little notes on the table ‘cloth’ 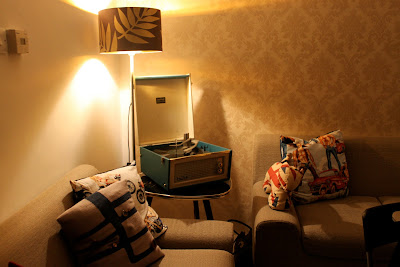 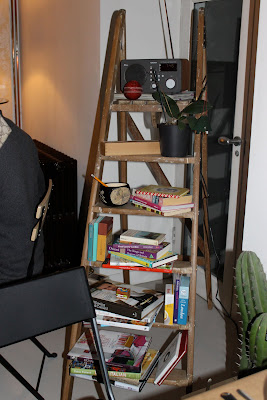 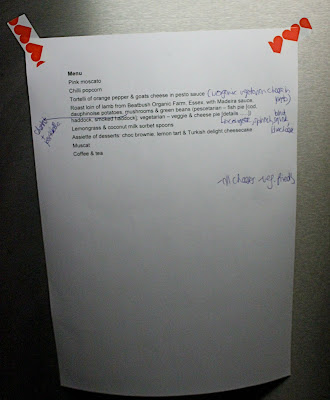 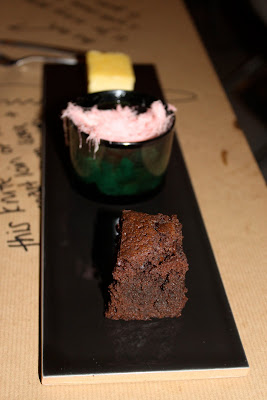 A night on the tiles
Lexeats is the supperclub of Alexis, an Australian food blogger now located in London and her girlfriend Yohanna. They have tons of style which is evident everywhere in their modern duplex apartment off the cultural wilderness that is Holloway Rd. I have never seen anywhere as clean and organised. Alexis confessed that they both had OCD about tidiness.
We started with excellent home-made tortellini and pesto. So good I would have liked double portions. Main course was a savoury and filling fish pie, topped with golden crispy pastry. This time perfectly judged portion-wise and well-seasoned. We were then given little spoons (I think they have spent a small fortune in gearing up this supperclub with equipment) for a palate cleanser of lemongrass and coconut icecream, which was delicious. (Want the recipe)
Puddings were served on wall tiles (cheap and original!) in a trio: a brownie, a turkish delight cheesecake with some sort of Greek candy floss on top and a lemon tart. All were good but none of them could beat the icecream.
Yohanna then handed around some dessert wine. By this time I was really getting to know my fellow guests who were mostly Australian on my table. The guy had a mum called ‘Suzi Q’ (she was a fan of Suzi Quatro). Then Alexis tells me her mum is also called ‘Suzi Q’. Must be a common name in Australia?
Lexeats, Holloway,
£20 minimum donation. 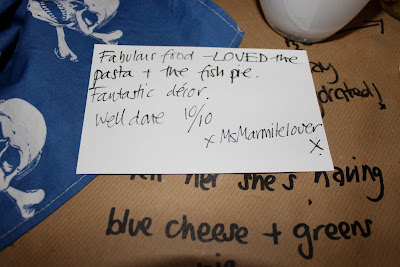 (1) It’s an instrument for drying and melting ice in an area out of reach.