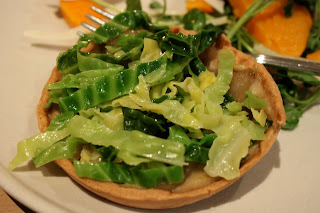 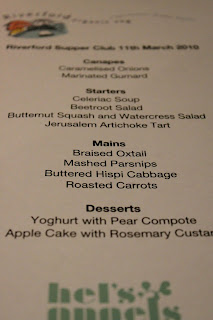 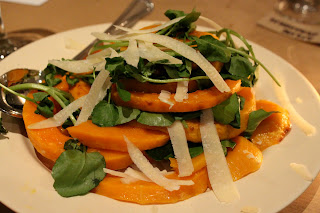 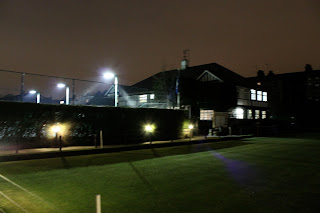 Had to cross a tennis court in the dark to get there. 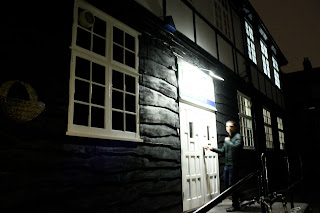 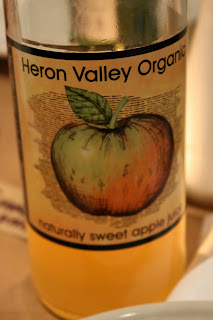 Generous with the fruit juice and the wine. 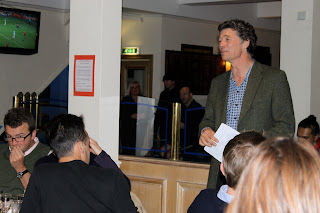 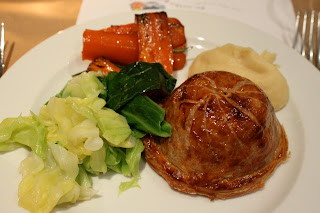 Not sure about this veggie main, the pie. Bit worthy. The carnivores liked the meat dishes, from Guy Watson’s brother’s herds. 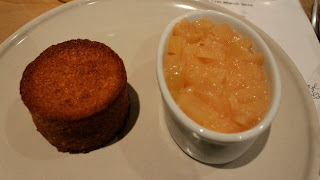 Apple cake served with rosemary custard.. Looks ordinary but is brilliant. Mostly I only like cakes with lots of icing. Yoghurt with pear compote 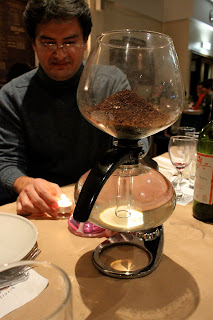 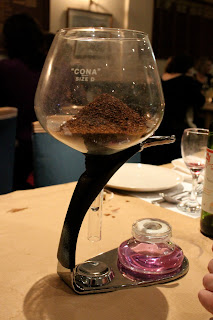 A guy on the other end of my table grew coffee. He brought along a strange machine to brew it. It’s a D cup machine. About the same size as me…

Riverford Organics has been running a few events, supperclubs, over the last months, designed to highlight their excellent produce (which I use). I was invited by their PR to come to this one at the Paddington Rec club house in Maida Vale, cooked by Notting Hill Brasserie exec chef Mark Jankel. That bloke knows his way around pastry I can tell you. The Jerusalem artichoke tart was so crumbly, so fine, so buttery. Many of the dishes were a bit obviously ‘I’ve got a ton of cabbage and what shall I do with it?’. The produce, rather than the imagination of the chef, came first which is fair enough.

I had a good chat with Guy Watson, the boss, and told him that Riverford Organics Twitter account should interact with people, it’s not just one way. It’s a conversation. I said he should tweet from his fields. He was horrified by the suggestion:

“I farm to get away from all that”.

Maybe I should host a Twitter course, perhaps combined with a meal? Chef Gordon Ramsay went on one prior to going on Twitter but it didn’t help him much. He followed nobody back & just made a series of announcements about his glamorous trip to LA. Eventually, due to mass Twitter scorn, he followed back a few mega-slebs, people that he considered of his calibre. Why go on Twitter if you don’t want to talk to people? It seems bizarre that one would need lessons to learn how to tweet but it’s amazing how often companies and celebrities get it wrong.
There were about 80 guests and it must have been quite a task to cook a fixed menu for all of them. As a result the room was quite noisy. Rather than choosing where we wanted to sit, we were placed. I didn’t like that.* I got stuck next a lady who drove me slightly mad with questions. Who you sit next to at a supperclub makes a real difference as to how much you like the experience. Sometimes you feel like being entertaining, the jokey extrovert one, but at other times, well, I like to be entertained too. Even though it was a freebie, I would have preferred to have chosen where to sit. The others on my table were bloggers which, nice as it is to see them, I’ve met them so often before and the whole point of supperclubs for me is to meet new people or at least a mix of new and familiar. Plus I was in a bit of a bad mood. Realised afterwards that I was on the verge of starting my period so felt like quaffing a vat-load of the biodynamic organic, grown by the moonlight, red wine that was generously being poured out but as I was driving I stuck to the fruit juice.
Riverford Supperclubs
Various locations
Price: £25
* At The Underground Restaurant I let people sort themselves out. In John Cleese’s book ‘Families and how to survive them‘ he talks about an experiment whereby people are put in a room together, not allowed to speak and are asked to stand next to people they feel they relate to. People, just on sight, stood next to people who had remarkably similar family structure, similar inhibitions. The only people that didn’t stand next to anyone, according to this experiment, were adopted children.