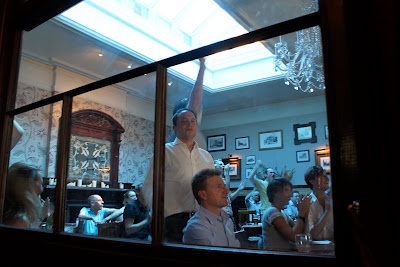 I wrote a piece on Bethea Jenner’s football astrology talk a few weeks ago. Yesterday Bethea and I, after a quick lunch gathered from Monday night’s leftovers, staggered down to the North London Tavern to watch the game. Bethea was wearing red and was skittishly nervous about the game.
The North London Tavern, surprisingly, was not too crowded and we managed to secure a table right in front of a screen. Last Friday, I watched England play Algeria and was shocked, for I seldom watch football, at the slow and sluggish lack of energy. The England team footballers didn’t seem to care and criticisms about ‘eleven millionaires on a pitch’ not having any motivation rang true. Wayne Rooney was upset that the fans booed them, but it wasn’t surprising. Imagine paying out all that money on a flight, hotel, tickets to watch your country play in South Africa and getting that performance.
Even yesterday, we managed a goal, but England weren’t exactly playing ‘the beautiful game’, there was no flow, no grace, no natural talent on display except for a couple of youngsters. England make it look like hard work. As a non-football expert, I struggle to understand how we can have the best league in the world, so many famous footballers and yet be so underwhelming as a side at the World Cup. Is it all about the money?
Bethea explained to me that some footballers retire from playing with England early so that they can concentrate on their last few years with their clubs, earning a few extra bucks. The F.A, whose initial meeting chart forms, she believes, the chart for Football itself, are no help as an organisation, being run by a bunch of stuck in the mud old fogeys who stymie talent and creativity.
We looked at the chart for the match: I can’t remember the details due to drinking two pints of lager (I’m a cheap date and I was trying to get into the swing of things) and hopefully Bethea will post more on her blog (Sybil’s Boudoir) about it. My first impression of the chart is that England’s main opponent was not so much Slovenia, but the expectations and hopes of people back in England.
But expect upsets: Uranus, having spent seven years in Pisces has just moved into Aries. Uranus which equals rebellion, shocks, innovation, the unexpected in the sign of youth, aggression, energy and enthusiasm. England are Aries, and should always play in red, the Arian colour. Capello should pick young players. I remember Michael Owen and Rooney as youngsters in the World Cup, it’s shocking that Owen, at 30, is no longer playing for his country, and Rooney, well, if you told me he was 42 rather than 22 I wouldn’t be surprised. He looked ancient, bald, puffy, tired. Maybe they are pushed too hard, too young.
Rooney, astrologically, is having a tough time. Saturn, the planet of age, time, depression and wisdom is transiting his natal Mars, aggression, competitiveness, drive, energy; he probably feels as ancient as he looks. Not a good transit for a sportsman. This transit won’t last long but it’s timing is unfortunate for this World Cup.
The French manager, Domenech, uses astrology to pick his team: he dislikes Scorpios and won’t play Leos in defence. As astrology deals with 12 signs and football has a team of 11 men, possibly this could explain why France are out of the World Cup.
You can read more about astrology and football in this book: Football aims for the Stars: How the Constellations Can Affect Planet Football 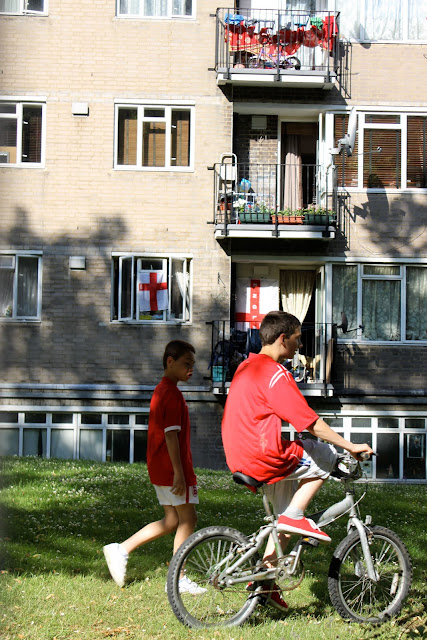