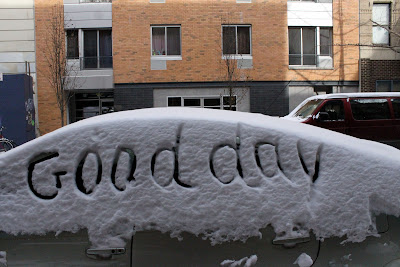 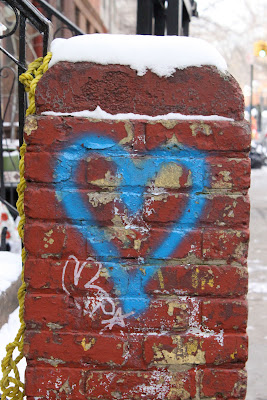 I haven’t been to New York, ooh, since my daughter was 18 months old, when I ran away to America, baby in tow, to escape, although I didn’t know it consciously at the time, a rapidly disintegrating relationship with her father. I rode up and down the east coast for a month in a borrowed pick up, staying on sofas and camping by rivers, seeing whales up in Vermont, visiting beautiful clapperboard houses around Boston, pinching corn from Amish fields and meeting up with old friends in the stifling mid summer heat of Manhattan. I’ve never been here before in the winter.
Almost every email from locals told me to be careful about the weather. Well, my fellow Brits, those yankees must be pussies cos it’s not that cold. In fact it’s beautiful; piles of snow on the pavements contrasting with the yellow bricks of sun glanced buildings and a clear sky in stars and stripes blue. You want weather? Try living for six months under the low slate grey eaves of London. 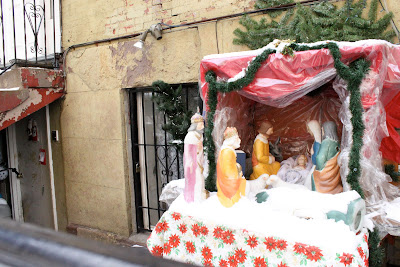 A snowy creche on the streets of New York 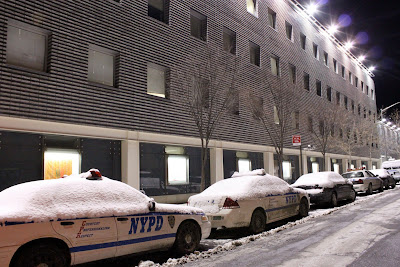 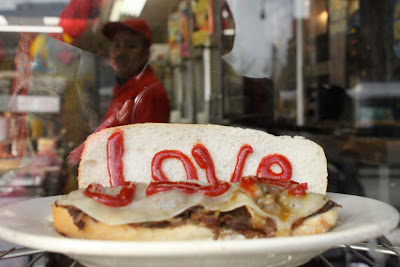 My maiden trip to New York was with my parents in the 70s. I had my first salad bar experience, complete with mind blowingly good blue cheese dressing (still rarely seen in the UK) at a restaurant called Maxwell’s Plum. When it closed in 1988, the New York Times said “it symbolised two social revolutions of the 60s -sex and food-“. I remember the decor as red brick with art nouveau stained glass lamps, terribly trendy at the time, and the salad bar, something common today, where you could get as much as you can eat, an extravagant concept for a British child, even one as used as I was to eating out. (My parents took us everywhere; on every holiday, to risqué theatre shows like the Rocky Horror Show, everywhere, it was a good education).
My first visit on my own I got sucked into one of those shop fronts lit up with chandeliers and red velvet curtains and a neon sign saying ‘psychic’. The dark eyed ‘gypsy’ woman inside said ‘you are going to have a veery bad time, but if you give me eight dollars more I will light a candle for you which will improve your luck’. (How come these joints are legal?) Devastated, I turned down the good luck candle and stumbled out onto the sidewalk. Little did I know that my best friend back in London had mysteriously fallen out of a window and died that weekend. (Hey Donna! Long time no see…how’s it going up there?) 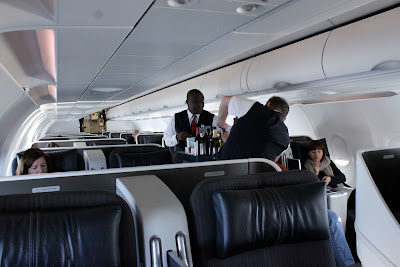 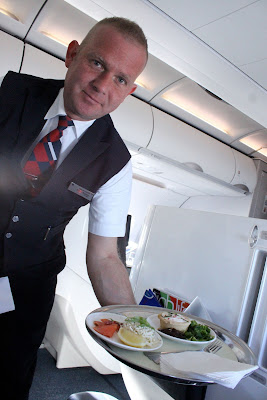 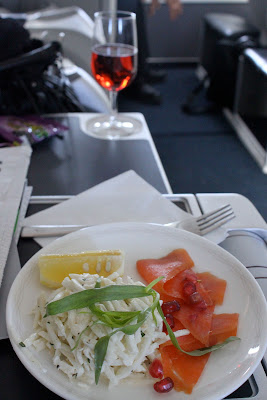 I got to New York this time courtesy of British Airways, a delightful and useful perk from being named one of the Evening Standard’s ‘1000 most influential Londoners’. I took a 32 seater plane from London City Airport in Club Class. Rich socialite Tara Palmer-Tompkinson once said something like ‘my idea of hell is turning right when I board a plane’. I now fully understand her. How can I ever go back to hours of embolism-inducing cramped economy class on long haul flights? On this flight I had a bed! And we did customs in Shannon, avoiding the weary queues and humiliating grilling by customs in the States! I swigged back kir royales and movies for nine hours. Champagne socialism, here I come! 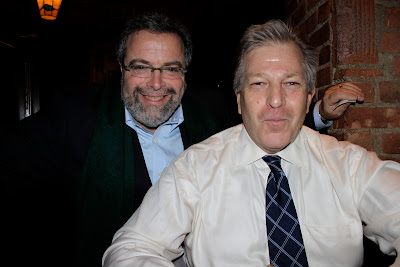 Drew and my cousin Jimmy 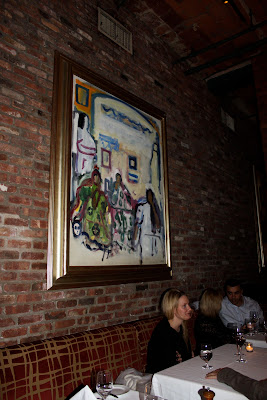 Robert De Niro also owns the Tribeca grill. His dad did the paintings on the wall.
Arriving on Friday night I hung out with my cousin Jim Stewart, who now teaches catering at Colombia University. He took me to the Tribeca Grill where we had good Margaritas and met owner Drew Nieporent who also owns Nobu. Drew and my cousin both worked at ground zero in the aftermath of 9/11, providing food and drink for the rescue parties, a mammoth logistical exercise.

Jim and I took a walk to ground zero. His best friend who also worked on the rescue effort has just been diagnosed with cancer as have many who continued to live and work within the ‘chalk line’ area, meaning the blocks where the white powdery rubble, asbestos, from the collapse of the buildings started to dissipate. Even working as the caterer was traumatic; weeks of finding small body parts amongst the disintegration.  The tenth anniversary of 9/11 will be later this year. I think the 7/7 inquest in London which has taken place over the last few weeks has been a useful therapeutic tool for both those involved and the rest of us to fully understand what happened. These events leave scars which take years to heal.
We then dipped into one of New York’s ‘dive bars’; the Raccoon Lodge, which had The Clash and Blur on the playlist, grimy urban tracks for a grainy rough space, host to a dark brown pressed tin ceiling, beer mat patchworked walls, a punch bag machine, pool tables and beer taps along the long wooden bar manned by a friendly pony-tailed barman. On one high up shelf, fireman’s helmets were stacked, for the Raccoon Lodge, a mere two weeks after 9/11, was where, at the end of a shift, the crew relieved the dark reality of clearing up ground zero with a few beers. 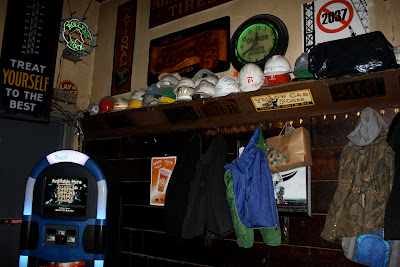 Fireman’s helmets poignantly lined up at the Raccoon Lodge 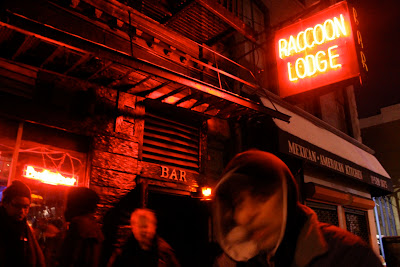 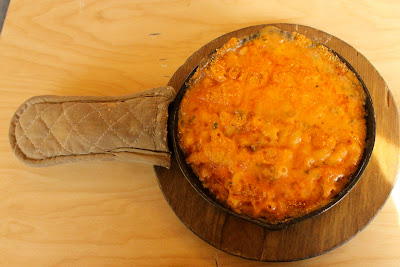 Salsa piquante macaroni cheese at S’mac: the only item on the menu is a variety of mac and cheese; part of a trend for ‘single item’ restaurants. 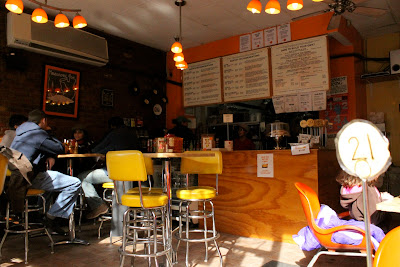 On Saturday I ate at S’mac: a restaurant that only serves mac and cheese (macaroni cheese). A great concept but poorly executed I’m afraid. You could choose to have your mac and cheese with corn on top. The pasta elbows were of poor quality and so was the cheese. I liked the individual cast iron pans, something I often do at The Underground Restaurant; just shove a hot cheesy dish in it’s pan onto the table for sharing.
I learnt to master public transport. I bought a weekly pass for $29 with the help of a black man with bloodied lips who couldn’t understand my accent: “What is the transport pass called?” I asked him, not knowing what button to press on the machine. He asked me to repeat several times, mistaking the word ‘called’ for ‘cost’. I changed vocabulary, substituting ‘named’ for ‘called’. On the ‘L’, a young black man faced each passenger, moving slowly down the carriage, his voice growing ever hoarser, and produced an impromptu rap based on their appearance. It was an impressive performance and if you liked the verse you gave a tip. With me he managed to rhyme ‘red beret’ with ‘cherie’ and threw in a back handed compliment about how he, despite my venerable age, found me pretty enough to “get with” as in “I could get wit choo”. 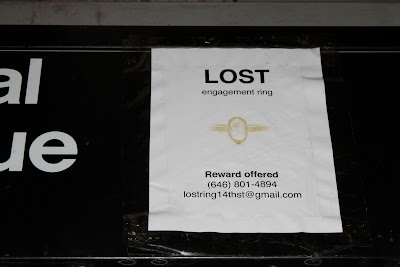 A touching notice on the subway.

In the evening I took a yellow cab, manned by a well educated Indian man who used to be food and drinks manager at the Hilton but was”let go”when the recession hit and retrained as a cab driver (“You know what, I now earn as much as I ever did in catering, and my life is much easier”), to Williamsburg in Brooklyn. Williamsburg is hip how Greenwich village and the East Village used to be: full of artists, musicians and…underground restaurateurs.
Chef Matteo has been running ‘Four course Vegan‘ from his home for eight years now. It does exactly what it says on the tin; high end vegan food, four courses. The space is large, seating around 30. For many years Matteo (actually he’s called Mathew, but years working in kitchens around Hispanics led to him being rechristened Matteo, which stuck) ran this supper club on his own; cooking and serving up to 40 covers by himself. A year and a half ago he met Carly, a fellow vegan. Carly who now does front of house told me “I’m so glad he’s let me in, it took a long time. It’s great, now he says ‘we’ and ‘us’ about Four Course Vegan”.
On my table I sat next to a self proclaimed ‘transport enthusiast’, or what we would call a train spotter. He’s visited London several times, generally sailing over on the Queen Mary ship. He’s in the unusual position (for Americans, who mostly only get two weeks) of getting six weeks vacation a year because he works as a bus inspector. Every time any of my fellow guests on the table mentioned a place, he would talk about all the possible bus routes and their reliability to that location. Although he was the only vegan there, vegan and vegetarian food is taken alot more seriously in New York. Omnivores will eat at vegetarian places; there is none of this snobbery so prevalent amongst sneering British foodies. 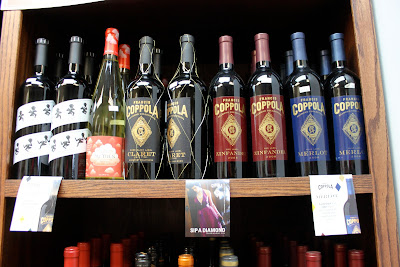 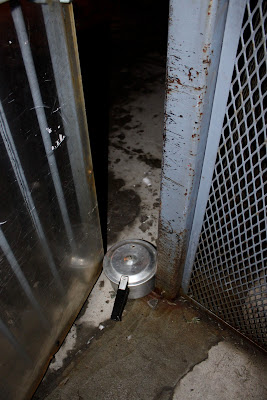 Pot in the doorway, gives a clue to the address. 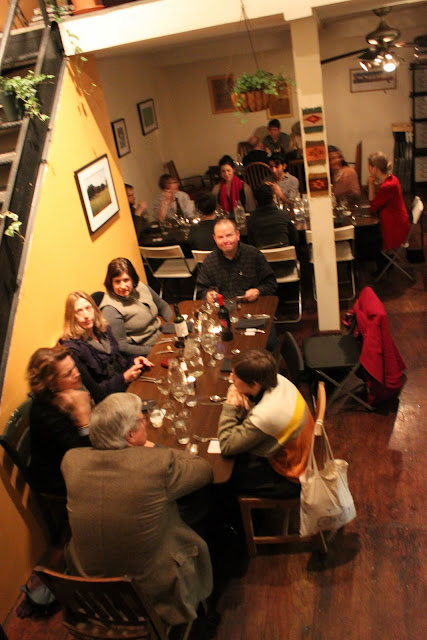 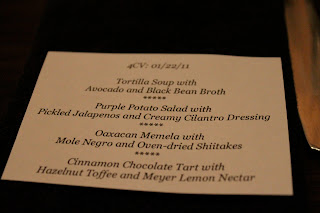 Carly and Matteo had just got back from Mexico and Oaxaca, which influenced this menu. 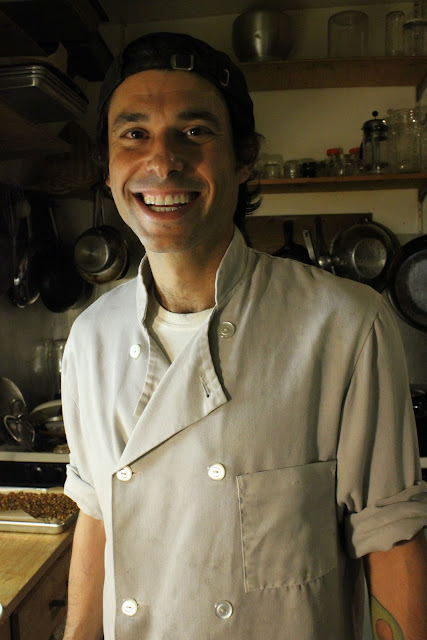 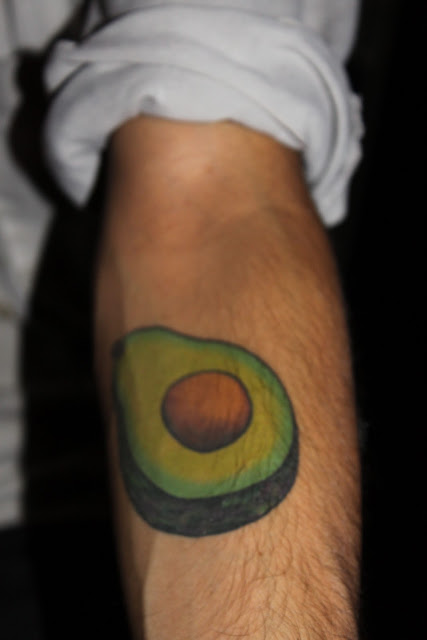 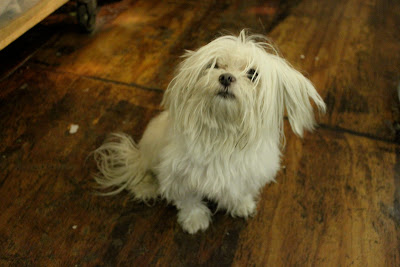 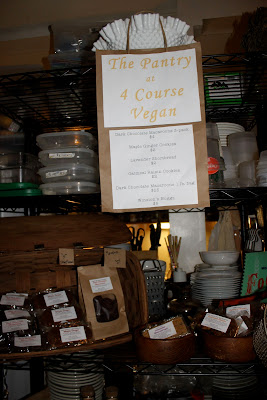 Matteo has a little shop going in the living room, selling his products. 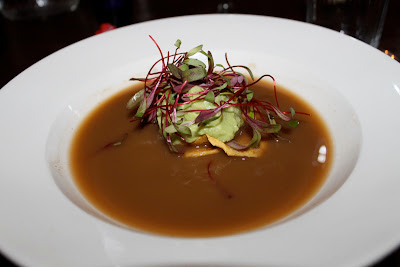 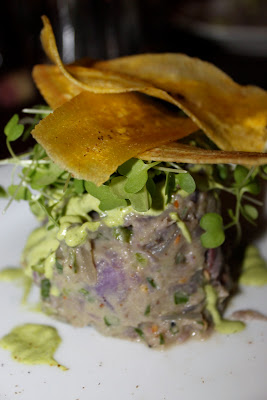 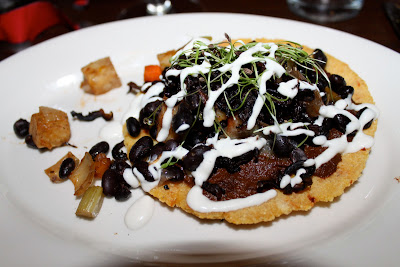 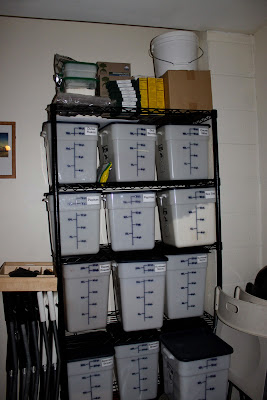 When your home is a restaurant, your shelving becomes a pantry/storeroom. 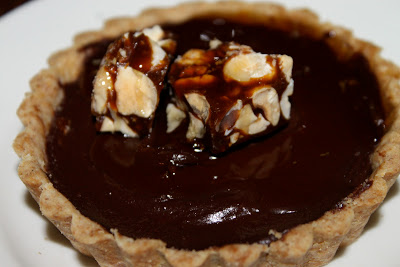 After the dinner, I hung out for a few hours with Matteo, Carly and an Australian friend of theirs, a stripper who regaled us with stories of her customers. It was a cool night, and I’d recommend it to any visitor. Dinner cost $40, Four Course Vegan is generally open once a week.