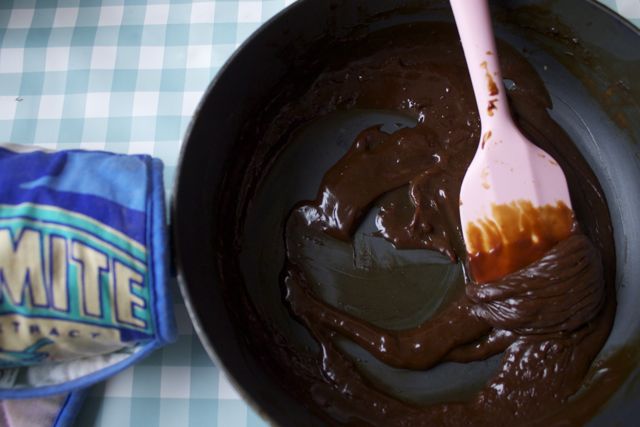 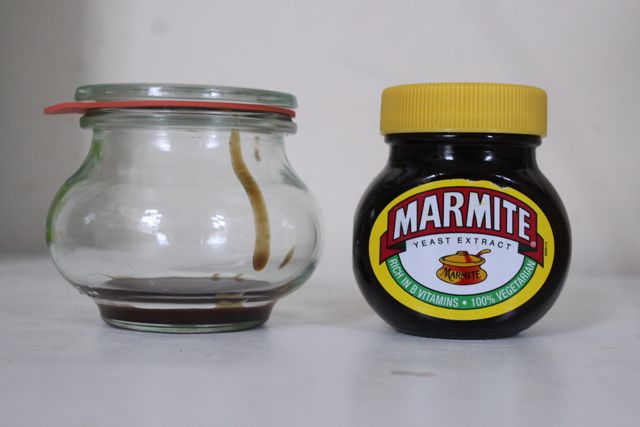 When I started blogging I searched around for an original name. Not an easy task, blogger rejects any blog name that has already been chosen. I reached deep inside myself and thought about who I truly am, my background, my influences, formative experiences and I came up with the moniker MsMarmitelover.

For I am a Marmite baby. I had Marmite on toast for breakfast every morning. On getting home from school, my brother, sister and I devoured an entire white loaf smeared painterly with Marmite: dark brown paste on soft white bread with yellow butter. Once, on being asked what earthly object I’d like to take with me to heaven, pharaoh style, I said, with only the briefest reflection, “a pot of Marmite”.
It never occurred to me that you could make your own until a chap I met on a dating site casually let drop that he was a keen home brewer and that he knew people that made their own Marmite. My ears pricked up, incredulous, you can make your own? I felt like I’d discovered The Great Work, the philosopher’s stone.
Internet research led me to geeky home brewing forums, which didn’t reveal much. Delving further, I was led to the Marmite Facebook group where fans were posting tentative recipes. Some of these recipes used alien foreign ingredients such as Braggs: it seemed even Marmite-deprived Americans were getting in on the act.
My role as MsMarmitelover meant that I was able to go straight to the top: after some negotiation with the Marmite authorities, I was given a telephone date with  St.John O. Skelton, Master Blender of the Marmarati Order or, more prosaically, Quality and Innovation Expert at the Marmite factory in Burton On Trent. He was willing to help me but darkly intimated that making Marmite was “dangerous and hard to control”.
The location of the Marmite factory is due to its proximity to all the breweries. Marmite is seasonal; beer is more watery in summer, and batches are blended together to ensure consistency. There is fluctuation in texture but the hallmark of Marmite lay in its smoothness as opposed to the more granular Vegemite.
St.John, yes that is his first name (‘don’t ever call your kids St.John, computers don’t recognise the full stop in email addresses and you get teased at school’) could not of course disclose the highly guarded secret recipe to make Marmite but gave me indications, a starting point from which to embark upon home-made Marmite.
St. John suggested using baker’s yeast rather than brewers yeast.. But my experiments revealed that baker’s yeast is too cloudy, while brewers yeast will eventually separate, evincing a dark clear solution.
To obtain the brewers yeast, I visited a local London micro-brewery, Redemption Brewery in Tottenham to obtain ‘beer scum’ or ‘top fermentation’.
I’d always assumed that celery and carrots formed the ‘vegetable extract’ part of the flavouring process, but St. John let slip (was it a mistake or a red herring?) the word ‘turnip’. Could turnips be the Marmite secret ingredient?

Recipe for home made Marmite:

A litre of Brewer’s yeast (top fermentation from a brewery)
A little sea salt
1 onion, diced
2 carrots, diced
1 turnip, diced
1/2 celery stick, diced
1) Put a litre of brewer’s yeast with a little salt, in a bain-marie. Simmer at blood heat, 30 to 40 ºc for ten hours or overnight.
2) Then simmer this mixture at 50 to 60 º c for 2 to 3 hours.
3) Boil at low temperature 90ºc  for half an hour. (In the factory they have a special machine for this, or you could ascend a mountain of 10,000ft, to achieve low altitude boiling)
4) Filter though coffee papers or a sieve and cheesecloth
5) Let it cool for a day or so. It separates further.
6) Filter again.
7) You then want to convert it to a paste. This is best achieved by putting it in a large flat pan and simmering. On an Aga, you can simply leave the pan on the lid for a few hours. Keep an eye on the mixture.

“We have a man in the Marmite factory whose job it is to watch Marmite evaporate. Literally like watching paint dry” explained St.John cheerfully.

8) Meanwhile boil up all the vegetables until they are cooked. Strain off the liquid and incorporate into the Marmite paste.
9) Let the mixture reduce into a Marmite like texture. Do not allow it to burn:

“We do not want to develop caramel notes” warned St.John.

The entire process takes about ten days.
This home-made Marmite admittedly tastes different, like something German and healthy in a tube. Lacking the specialist equipment to ‘debitter’ the yeast, it will have beerier flavours, rather like the Guinness or XO Marmite.
It was a comfort to know that I could, in a pinch or say, a calamitous event such a terrorist attack on the Marmite factory, DIY my own Marmite. But realistically, I’ll probably stick to shop-bought.
Have you experimented with making your own Marmite? Or any other easily bought condiment such as mustard or ketchup? Do they compare with the famous brands such as Colman’s, Maille mustard or Heinz?
Update: the main problem was the bitterness of the brewing yeast. The solution is to wash the yeast. You achieve this by putting the top fermentation in a jar full of water. Eventually the yeast will settle on the bottom of the jar. Pour off the water and fill the jar again with fresh water. Do this several times to wash the yeast. Then follow the recipe above. 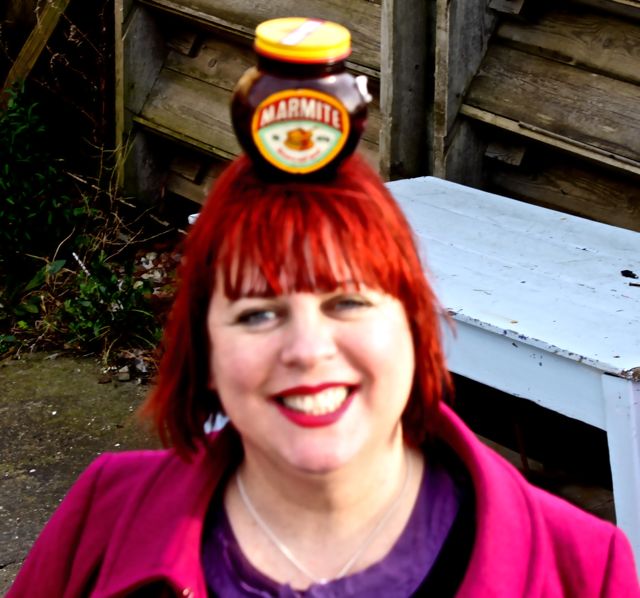 Portrait of myself (by Audrey Gillan after 7 bottles of wine.) 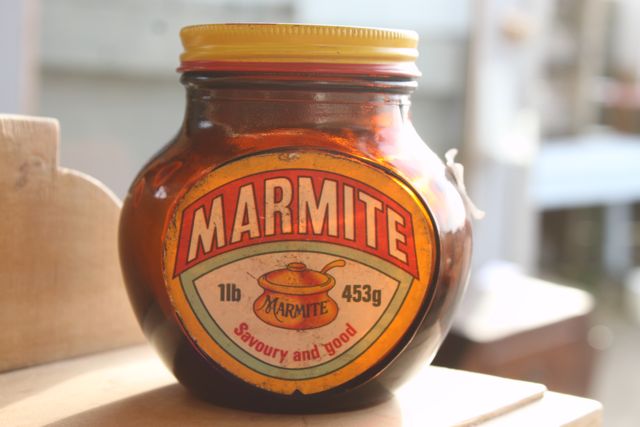