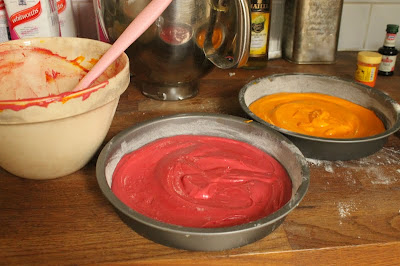 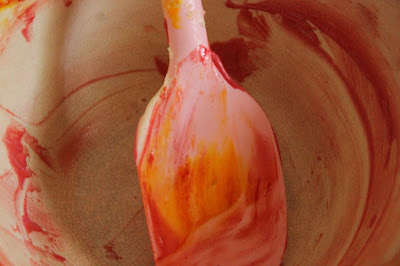 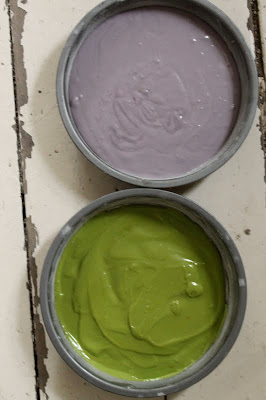 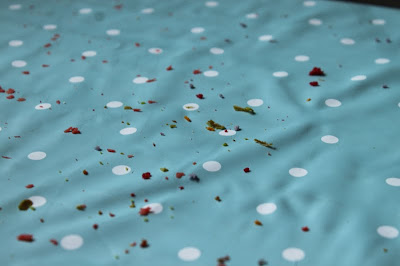 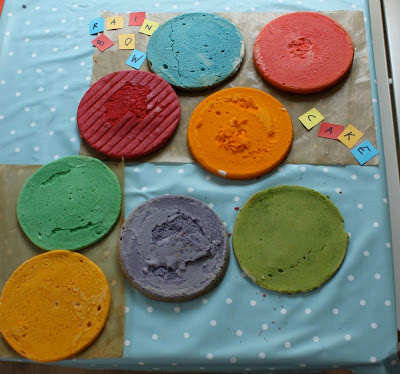 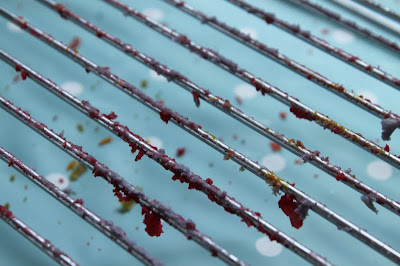 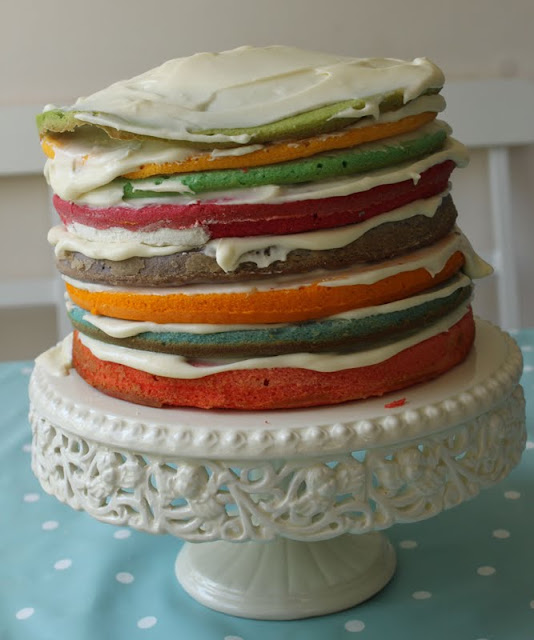 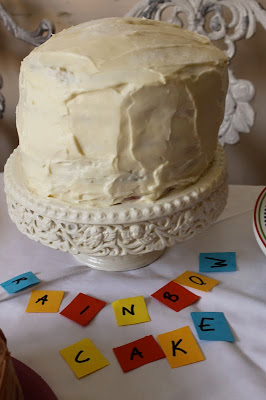 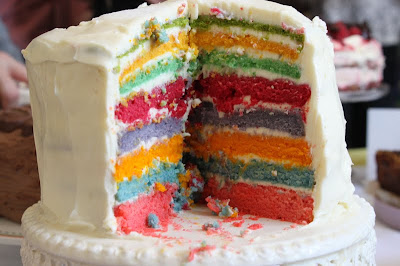 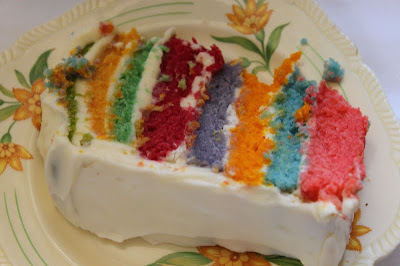 Rainbow Cake
530g of sifted plain flour
1 tsp of salt
230g of unsalted butter (room temperature)
600g of caster sugar
4 large eggs
A few drops of vanilla extract
480ml of buttermilk or yoghurt mixed with a little creme fraiche
2 tspn white wine vinegar
2 tspn baking soda
Food colouring in various colours, preferably gel or powder
Icing:
450g of full fat cream cheese
500g of Mascarpone
A few drops of vanilla extract
240g of icing sugar
600ml of double cream, whipped
You need sponge cake tins for this recipe. I only have two so I baked two layers at a time but if you have more, even better!
Sift together flour and salt in a bowl.
In your mixer beat the butter until whipped. It should be spread fluffily around the sides of your mixing bowl.
Then add the sugar and beat for at least 2 minutes.
Whisk the eggs together and add in a slow trickle to the mixture while it is being whisked. Add a teaspoon or two of flour at the same time. You want to try to prevent curdling which makes a dent in your sponge.
Every so often, stop the mixer and scrape down the sides. The mixture should look pale and airy.
Then take the flour and the buttermilk/yoghurt and add alternately to your mixture ending with the flour.
In another bowl mix the vinegar and baking soda together and add to the main mixture.
So now you have your sponge batter.
Take your buttered and floured sponge tins and some bowls.
Divide the mixture between the bowls. If you are really swotty you will do this evenly but I wanted thicker layers at the bottom of the cake, thinner at the top.
Stir your chosen food colouring into each bowl. To make more colours, mix your food colouring eg red and blue make violet, some yellow in the green gives you a different shade of green. Using powdered food colouring means that perhaps the sponge batter is more stable without the extra liquid. You can play with the colours like paint pots. Really fun to do with the kids!
You could also add food flavouring such as lemon essence for the yellow layer, orange essence for the orange layer, mint essence for the green, almond essence for a pale green, chocolate powder for the brown.
Pour the mixture into your cake tins and bake in a pre-heated medium oven, 180 C, until firm, about 15 minutes. In the Aga, I baked the sponges on the top shelf of the baking oven. (You could also use the bottom shelf of the roasting oven with a cold shelf if you have a 2 oven Aga). Put a skewer in the sponge and if it comes out clean, it’s cooked.
The layers are thinner than a normal sponge sandwich so use a fish slice or something to turn out the sponge tins onto a rack. Let cool for a couple of minutes then cover to prevent drying out.
While all your layers are cooling, make the icing. The Rainbow cake recipe from Whisk Kid uses a lemon meringue icing but every time I try this, it curdles! So I used a cream cheese icing instead.
Beat the cream cheese and the mascarpone together. Add the vanilla and the icing sugar. Add the whisked double cream.
Assemble the layers one by one in the order of your choice, spreading a layer of the cream cheese icing in between each layer. Then with a palette knife, spread the rest of the icing all around the cake, completely covering the top and sides with a thick layer. I sprinkled some ‘disco’ white glitter on top.
Fantastic for kid’s parties: you could even cover the top with Smarties. This blogger got her kid to doodle on the white surface with edible ink pens.
For a patriotic cake, see my Royal Wedding red, white and blue cake.