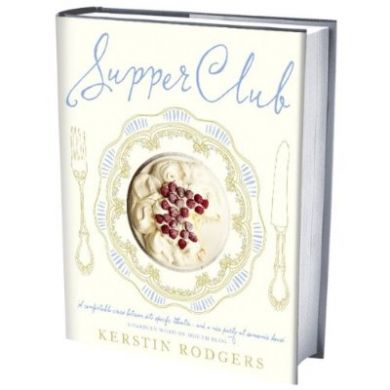 Always passionate about food, photographer Kerstin Rodgers slowly began to find herself cooking professionally for various cafes and festivals. In January 2009, Kerstin launched one of the first UK supperclubs, The Underground Restaurant. It was an immediate success. She’s been at the forefront of the underground food movement ever since, encouraging and giving advice to others with the group that she started Find a supper club, become a fan… a place to promote supperclub events.
And now, she has produced a lavish new book, The Supper Club, a homage to this secret restaurant phenomenon. In it you’ll find Kerstin’s inventive and delicious recipes and themed menus, peppered with her helpful hints, tips and wild experiences. You’ll also be treated to Kerstin’s down-to-earth advice on how to run your own home restaurant, and a directory of other supper clubs of note around the world. In few other cookbooks will you find recipes such as elderflower fritters alongside home favourites such as Macaroni and cheese.
Kerstin wil be reading from the book, answering questions and of course she will be happy to sign copies of the book, which is available in the bookshop. There maybe also some tasty morsels for you to sample too.
This is a free event, but please get here early, to ensure a place…
Taking place at the Big Green Book Shop in Wood Green, one of the few independent bookshops left… http://www.biggreenbookshop.com/events-diary/info_6.html

I love this bookshop! I went to see Bill Drummond do a truly trippy talk there. I hope I can live up to it.

Recently I was part of a panel at the SW11 Literary festival with other bloggers who became authors.
I shared what I had learned:
1) Getting published is mostly due to luck or connections. Mine was down to luck, I met my editor  at a party. We clicked. ‘I get you’ she said to me.
2) You have to promote yourself. Authors that don’t use Twitter, Facebook, pimp themselves out to anybody they know in the press are making a mistake. You can’t live in an ivory tower. You gotta be a bit of a media ho.
3) It’s nice to have a launch party but not necessary. It rarely results in coverage or better book sales. I didn’t bother. I do entertaining as a day job.
4) You have approximately a two week window to promote your book once it comes out. Publishers bring out books twice a month on a Thursday. You’ve got a fortnight before a bunch of newer books come out.
5) Cookbooks are rarely reviewed by serious newspapers, not even under non-fiction. Cookbooks account for 30% of all book sales however.
6) Publishers want cookbook authors who are on TV as it’s almost a guaranteed sale. Cookery TV is basically advertising for cookbook authors, in half hour slots. My publisher Harper Collins took a risk on me: I’m not a TV chef, my book was expensive to produce and is visually luxurious.
7) Sleb culture has infected cooking too. I was on Market Kitchen while a young soap actress who doesn’t cook for a living, demonstrated a recipe. I, on the other hand, was sitting on the sidelines, trying to elbow in a comment or two (as instructed by the producers). I thought ‘What is wrong with this picture?’
8) Publishers don’t really organise book signing tours anymore.
9) Get your hair done, get your teeth done, spend money on a colourful outfit, a look. Most press is visually led, good photos lead to coverage. Coverage sells books.
10) Writing a book is lonely. Testing and writing recipes is really hard work. (Some cookbooks don’t test their recipes: unfair as readers are buying ingredients based on your advice, you have responsibility for their dinner!). While you are writing it you think it is shit. By the time you’ve finished, you hate your own book.
11) Publishers don’t edit as much as you think they will. They have fewer resources nowadays. You need to get your grammar, punctuation, spelling and structure right. Unless you are famous, the publishers haven’t got time/budget to sort it out.
12) If you have guest recipes and want to send out copies to contributors you have to pay for the copies and the postage.
13) If there is enough money, your publisher will make a ‘BLAD’, a glossy pamphlet/mini version of your book for the press or foreign rights purchasers. You want foreign countries to buy your book, you might actually make some money that way.
14) Don’t expect to make any money.
15) When you see the first copy of your book, you feel amazing. 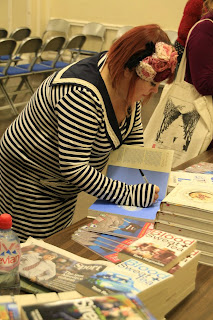 If you have any questions, put them in the comments below and I’ll do my best to answer them honestly.