I’m miserable. I’m not sure why, well there are probably a million reasons why, only some of them ‘valid’ but I’ve been attempting to bat away depression for a few weeks now.
It’s that mild kind of disgruntlement with life that makes you eat more. Real tragedies, of course, render you unable to eat anything.
But life has lost its colour. I’m in the black and white bit of the Wizard of Oz in Kansas: restrictive, dull, conventional, unenjoyable. Everything annoys me. I’m irritable as fuck. I kinda hate everyone. I was horrible on Twitter to someone who tweeted cheerful happy tweets* to me. How dare she? How dare she have a husband and kid and house and security and success and contentment?* * As I age by the minute and crawl into my second? third? year of unelected celibacy, I reserve particular ire for married women, although I’m sure some of them are perfectly nice. I’m just jealous that’s what.
We are slipping into winter, and I haven’t had a holiday for over a year. Every year in March I feel better, almost without even realising that I’ve not been feeling great for months. I’m not claiming that I have SAD (Seasonal Affective Syndrome) or anything official that requires sunbeds and medication, more just a lingering lack of enthusiasm which is so unlike me.
As this is a food blog, what can we eat to cheer the fuck up?

Bananas! I’ve always heard that bananas make you happy. They contain Potassium and come in happy yellow, boasting a comedy shape and jacket.

Tea! I don’t even care what the nutritionists say, a cup of tea cheers me up like nothing else.

Oily Fish: really good smoked salmon, especially from an artisan smoker, puts a sparkle in one’s eyes I’d say. After all it’s a nice colour (my mother’s favourite along with peach) and contains Omega 3.

Coffee: we get so much conflicting advice about coffee. But some studies say it lowers susceptibility to Diabetes II. At least it gets you going, all that caffeine. I’m not much of a coffee drinker, maybe that’s where I’m going wrong.

Dark chocolate: a little of properly grown-up dark chocolate per day keeps the doctor away.

Red wine: another substance where we constantly get mixed messages from health experts. One glass a day can’t hurt and can help. Lowers blood pressure. Makes you a teeny bit drunk.

Avocado: apparently this fruit with good oil alleviates depression, contains tryptophan, which boosts feel-good serotonin in the brain. I reckon all fruit does actually.

Optimum nutrition guru Patrick Holford claims that the right nutrition can help with mental health diseases such as schizophrenia and bi-polar. While I’m sure Ben Goldacre would argue against this kind of fluffy idea, it makes common sense doesn’t it? Last year when I visited The Clink prison restaurant, we discussed how criminality could also be caused to a certain extent by poor nutrition. I don’t think it’s too politically incorrect to assume that much of the prison population come from poor backgrounds and neglectful parents who perhaps didn’t/couldn’t feed their children balanced meals.

I suppose I could also try NOT eating. I’m sure my fatness isn’t helping my mood nor my pulling power. Maybe I need a different vice; not eating but say, drugs. A constant diet of Ecstasy and MDMA would certainly make me happy, for a while. Look at this picture: 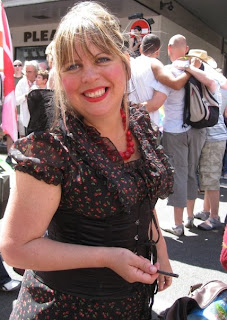 I look totally mind blowingly ecstatic don’t I? Have you ever seen me with such a wide smile? Well, I was on drugs at the time. I’m not a druggie person at all, but I thought I’d try a dab of MDMA which was offered to me while I was at Gay Pride. As I was carrying a massive drum and had my period I thought, why the hell not? I’d never tried it before. Folks, I have to admit: it was totally fabulous. Drugs are fun, momentarily and don’t believe anybody that tells you different. But the aftermath: for the whole of the next week I was a cranky witch and also made some rather dubious decisions. I met a guy off OkCupid, for some reason allowed him to visit me at my house on Friday afternoon. (He’d won a reality show, so I figured he’s not exactly an anonymous mad axe murderer. Yes that is the kind of date you get on OkCupid, Julian Assange types, interesting but nuts). I didn’t even fancy him. By Sunday afternoon he’d moved in. Yes. Wednesday evening my daughter discovered his mobile phone laying around and found texts to several other women saying how he loved them. Confronted, actually rather mildly by myself, on Thursday morning he stormed out. The teen and I still chuckle about it. But the moral of the tale, drugs aren’t worth it, you feel terrible afterwards and do stupid things during.
Anyway my dear readers, wanna cheer me up? If you’ve enjoyed this blog and the supper club movement that I have spawned then do one or all of the following three things. Yes this is emotional bribery. Yes I’m calling in my markers. You owe me. Admit it.

1) Buy my book. For yourself. For everyone you know. It’s pretty. It’s a great christmas present.
C’mon it’s not expensive on Amazon. http://www.amazon.co.uk/Supper-Club-Recipes-underground-restaurant/dp/0007382995
2) Book one of my Diva dinners: next one is Barbra Streisand night: 18th of November. Jewish food and musicals.
3) Comedy night with Josie Long: 25th of November. If you are miserable too, book this and we can pretend we aren’t sad for an evening.

ilovemealplans Victoria
@MsMarmitelover started my #supperclub this year am onto my 4th nxt month & it just booked out, I had to find an extra table : )

**I realise that many reading this will think I too have most of those things. But it doesn’t feel like that from the inside. It feels a bit desperate and bleak and worrisome. It’s all about perspective isn’t it? And sometimes your perspective is all messed up.