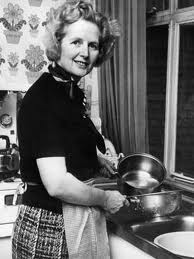 
I once queued to see Margaret Thatcher take on the house at Prime Minister’s Question Time. I’d heard of her dominance of the chamber and wanted to see it for myself. What struck me most, after her powerhouse performance, was her walk, which was very human, almost a waddle.
Like most people I have strong feelings about Margaret Thatcher. On the one hand I believe she developed the policies that put us in the critical economic situation we are in today, on the other, she was an impressive role model for women, despite herself. No one doubts that a woman can lead a country now. She came from an ordinary background and pulled herself up by her bootstraps to make a historic career.
My diva series of dinners celebrates talented iconic women and Margaret Thatcher was all of those things. I weary of the level of personal hatred directed at her, it seems that as a woman she attracts what Meryl Streep terms a “special rage”. 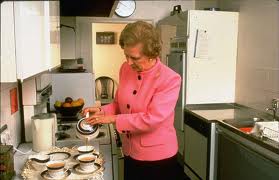 I’ve never met her but a left-wing friend hostile to Thatcher saw her at an event a couple of years ago. People were told not to speak to her, she was accompanied by minders, but my friend, a (female) journalist, decided to try for a quote. “How are you enjoying the evening?” she asked Lady Thatcher. Margaret Thatcher replied:“Good for you. You are trying. You’ve got ‘get up and go’. You are only doing your job.” My friend came away surprised at Mrs Thatcher’s solidarity.
She didn’t promote other women or women’s causes, she liked being the Queen Bee. This may also be down to the era she was brought up in, the ‘free love’ and separatist feminism of the 60s and 70s must have been alienating for many women. Carol Thatcher, her daughter, explains in 2008:
“Feminists didn’t think she was doing enough for their cause. This was the era of “Women’s Lib” but my mother was a stratosphere away from the bra-burning demonstrations of the time. On the contrary, she felt the movement had done very little for her. She was a hard-working example of female success from relatively lowly beginnings who had achieved cabinet rank by pragmatically getting on with the task in hand rather than by manning barricades and wasting precious time protesting.”

But I don’t believe she was unaware of gender issues, more she refused to denigrate the importance of traditional feminine skills such as good housekeeping, sneered at by some feminists during the early fervour of equality but whose reputation has been resuscitated in recent times. She made an interesting speech to The Good Housekeeping Awards Dinner in 1989:
“I had recently to lunch in Number Ten all of the Nobel Prize winners. It was a great joy because we’ve got rather a lot in our country, more in proportion to our population than almost any other country. And sitting next to me was one of the most remarkable scientists called Max Perutz, who came over from Germany during the dark days, became a Nobel Prize winner and has done so much for us. And I was quite startled when he said, “Do you know women’s liberation could not have succeeded if science had not provided women with household technology and many other scientific advances”.
Mrs Thatcher, a grocer’s daughter, was always concerned with food. Before she became an MP, Thatcher née Roberts, was a industrial food scientist for J. Lyons (who proudly cite her as a former employee on their website). She helped to develop saponification products adding air into cake fillings and icecream.
The candidate Margaret Roberts made early speeches on food science: the benefits of dried egg (sources: Margaret Thatcher foundation speeches here and here) seemed to be a major concern: ironic when you consider she sacked her only female minister Edwina Curry over the issue of eggs.
Before winning her first election in 1979 she went on the Mayo Clinic Diet, eating 28 eggs in one week to lose 20 pounds in weight.
Her 1971 speech to parliament in which she advocates the withdrawal of free school milk led her to be known by the nursery rhyme style title ‘Margaret Thatcher milk snatcher’:
“It is right that I should be asked about the effect on the poorest children of the withdrawal of free milk in schools. Again, I stress at the outset that if there is a medical need in the primary schools children will receive free milk whatever their parents’ income. We believe that this was the right way to tackle special needs which may arise concerning individual children.
For those parents on social security payments the withdrawal of free milk occurs within a short time of increases in social security benefits. [An Hon. Member: “Disgraceful.”] It would be more disgraceful if there were no increases in social security when this withdrawal took place. The withdrawal will occur at a time when increases in social security will have a number of effects.
The saving in a full year would be £9 million, leaving £5 million still on free school milk.”
She also talked about food hoarding, causing outrage by suggesting that people nearing retirement should build up a supply of tinned goods:
“The Former Education Secretary, Mrs. Margaret Thatcher, tried to stop criticism of her stockpile of tinned food by declaring yesterday: “It’s prudent housekeeping.”


On the 28th of January I’m hosting a Margaret Thatcher Tea with help from Lynn Hill of The Secret Tea Room. To be clear, I’m not a tory and you do not have to be either. It is a chance however to dress up. She had such a signature look: pearls, big helmet hair, pussy cat bows, big handbags complete with satisfying click at the claps, tan tights and court shoes, although coming as a miner is also welcomed.
I’ve been researching food from her roots in Lincolnshire. The small town, Grantham, where her father was a member of the local council and ran his grocery shop, is celebrated for white gingerbread.
Further afield, Lincolnshire is famous for artisanal smoked fish from Grimsby and Lincolnshire Poacher cheese.  We will also have handbag shaped biscuits and other Thatcherite goodies.

Yesterday I saw The Iron Lady. Unfortunately, it’s not a film about Margaret Thatcher, it’s a film about dementia. How would Meryl Streep, director Phillida Lloyd, writer Abi Morgan, like it if the frailties and loneliness of their old age were made into an entertainment movie? Before they were even dead?