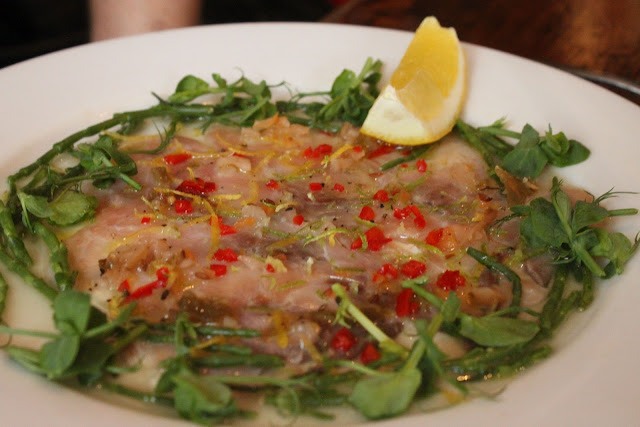 “I always think nobody fancies me”, I say breathlessly to Gabriel as I arrive, slightly late, at Vinoteca in Clerkenwell. He’d already ordered a plate of anchovies, or were they sardines? They were larger than anchovies. I grab some good bread from the basket, ramming it greedily into the white china inkwell of bright green olive oil, speckled with salt and pepper.
“But it’s not true”, I gulp “loads of people fancy me”. Gabriel’s face looks delighted, he is about to enjoy this.
“I realised this as I got off at Farringdon”, I continue, pointing to the cheapest Prosecco on the menu and ordering a glass from the waiter. “Every moment, walking around, men are looking at me, in the eyes, and I, literally within the space of a blink of an eyelid, reject them.” I look at Gabriel, wondering if he is following me. He nods, urging me on. “They look, I look away. It happens endlessly, these tiny signals, so infinitesimal they are almost unconscious. We are all doing it, all day, we aren’t even aware of it.” I pause. “Do you know what I mean?” I look at my friend.
“Yes”, says Gabriel.
“Once”, I’m inspired now, “I read an article, in the Mail I think, that a woman writer dressed up as a man for the day. She had expert help, a makeup artist, so it was convincing. She wrote that her abiding feeling was how lonely it is to be a man, how as a man you are not allowed to look at anyone.”
Gabriel looked confused. I explain.
“A look from a man means two things: confrontation or a come on. A woman can look at anyone anytime and nobody worries.”
“They have to worry about giving out the wrong signal”, says Gabriel.
“Of course. But a woman’s glance is never perceived as threatening.”
“Would you go for it?”, asks Gabriel eagerly, his blue eyes sparkling. (He’s an actor and a Tory. I didn’t even know that this particular combination was permitted. Aren’t all luvvies left wing?)
I’m amazed that he can be so crass. “You mean?”
“Would you take one of these guys up on it? If they looked at you and you liked. Would you… go off with them?”
“No. Plus they are all hideous. There are lots of men who fancy me but they are all unattractive”, I state. The waiter comes up and talks about the Prosecco, saying some guff about less bubbles than usual.
“Prosecco can be too bubbly”, suggests Gabriel. He often lies about food and drink.
“Hmm”, I frown. When it arrives, it’s flat. It’s flat yellow Prosecco. That’s why it’s so cheap. I once bought flat Prosecco by mistake via online shopping. Prosecco is pointless without bubbles. I also order salsify soup and fried artichoke salad. Gabriel only orders mackerel ceviche. I think he’s a bit broke.
I say, “We can share”.
The waiter leaves: “Have you seen Shame?” muses Gabriel.
“A bit. I fell asleep. Everyone says he’s got a massive willy.”
“Do you remember the bit on the train, where he’s staring at the girl.” Gabriel looks up then down to the right, meaning he’s using his memory. “I’m doing that a lot at the moment. Since I split up with my girlfriend, I’m not getting…well…you know.”
“Right”, I nod.
“So I can’t stop thinking about it. I look at girls on the tube.”
I briefly flash back to my old boyfriend, the French squatter/cross-dressing lumberjack. He used to look at girls on the North London line. In front of me. It was deliberate torture. Once we got on the train to Hackney together. Inevitably, two stops later he dumped me. Momentarily I’d had enough of the abuse, I stood up and shouted down the carriage to the other passengers: ‘Help, help I’m being dumped HELP me, I’m being emotionally mugged’. He looked shocked, then smiled. We were back on. It was a relationship during which I had to be on my toes creatively. 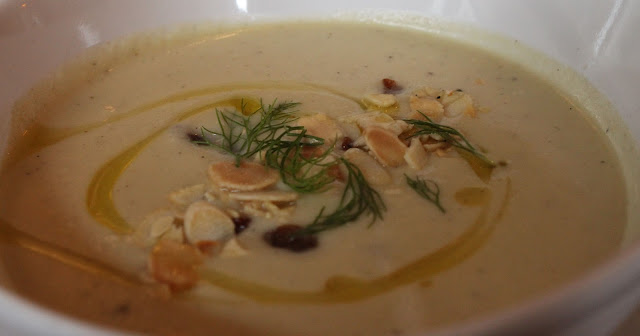 The steaming soup materialises in front of me. It has almonds and raisins sprinkled from a height, a large chef’s pinch, in the centre. It’s too hot to eat. When I do sip the thick magnolia paste, I can’t taste the salsify but the garnish helps.
My salad has thin slices of confit red onion, a good contrast with the slightly bitter leaves of the salad and oily fried artichoke hearts.
Gabriel’s mackerel ceviche is carved carpaccio style, almost transparent, the red slices going grey, cooked by the lime but refreshed by the red chillis and samphire dotted around. I have to stop myself from eating all of it.
I’m on my second glass of the flat Prosecco. I have a meeting later about vegetarian sausages, I will be drunk. 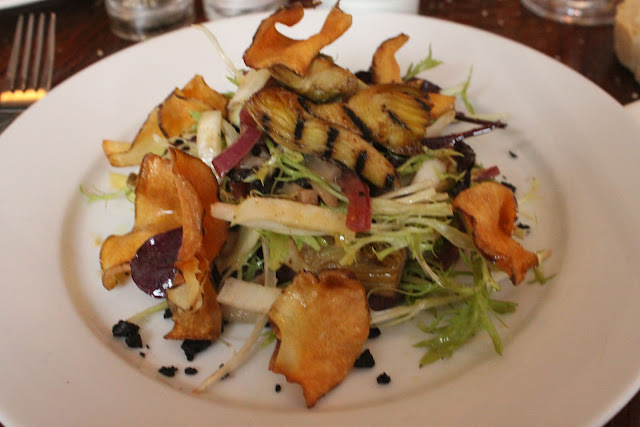