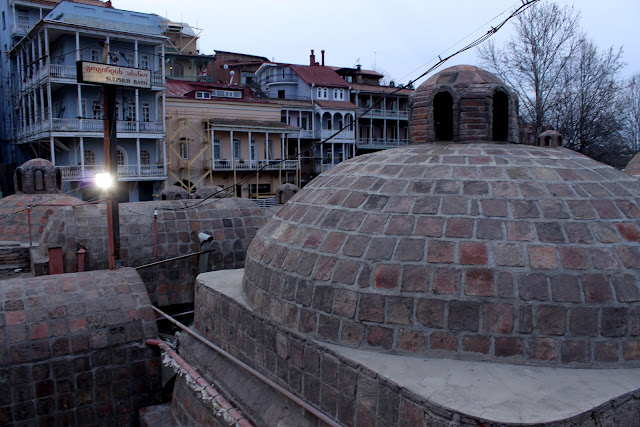 Outside the sulphur baths

I get a taxi to the sulphur baths in Tbilisi which cost 5 lari, about £1.50p. It’s supposed to cost 3 or 4 lari but who can be bothered to haggle over 30p. From the outside, the sulphur baths look extraordinary, a honeycomb of domed structures. I descend the wooden stairs clutching the piece of paper that Mako has written for me, which says I’d like a sulphur bath, a scrub and a massage, with her recommended masseuse. I place the paper on the reception desk for the receptionist to read; she immediately turns it around, it was upside down. The Georgian alphabet is curly and beautiful, almost art nouveau in style: it has influences from Cyrillic, Greek, Aramaic, Hieroglyphic and Latin alphabets, they say it was designed to resemble the Georgian grape vines that I’ve seen so much of on this trip.
I manage to establish that the bath costs 30 lari and the massage 20 (this seems the wrong way round). A thin sheet, acting as a towel, costs an extra lari.
They point to a dark dank room. “After 20 minutes, we knock on door and massage comes”, is communicated. I take off my clothes and enter a back room which has an eggy smell. Steam is curling off the two metre square marble pool. I dip in my toe, it’s very hot. I force myself to plunge. I feel all of the dust and grime of the last couple of days, melt away just like in the Radox ad. My skin feels soft but taut. Sulphur is known to be good for skin conditions, rhumatism and other health problems.
There is a knock at the door. I open it and a man wrapped in a bed sheet comes in carrying a bucket. I wonder if he’s the janitor. Then he locks the door behind him.
“No, No, No”, I say, putting my hands up.
“No, No, No”, he says, gesturing for me to calm down.
I say, “I don’t want a man, I want a woman”.
He shrugs, smiles and gestures for me to go and sit on the marble slab.
With dawning horror I realise he expects me to take off my sheet and be naked.
“No!”
“Yes!”, he says smiling.
“Are you sure this is the right thing?”, I ask.
“Yes!”, with a gesture of ‘it’s fine, don’t worry’.
I take off my sheet. I’m completely nude. He tells me to lay on the marble slab then he scrubs me with a rough glove over my entire body, back and front. At one point he points to my arms where tiny scrolls of grey skin has formed. He nods cheerfully to me with a wolf-like smile; the implication is clear: ‘look how dirty you are and how clean I am making you’.
I react with shock as he throws a bucket of boiling hot sulphuric water over my head. Next I am soaped, huge suds enveloping me. He ask me to enter the sulphur bath, I’m still nude. I feel vulnerable and unsure, it’s so intimate. Every so often he says “Gud?”.
I am mute. I’m still unsure whether he’s the janitor. He spends alot of time rubbing my temples, perhaps trying to rid me of anxious thoughts.
Lastly he directs me to get in the shower, place my hands against the wall, while he washes my hair and cleans my ears. Hair washing is very intimate; it’s something your mother does.
Finally he dries me all over with a sheet, again just like your mum would. He takes a deep breath, surveys his work briefly and leaves. 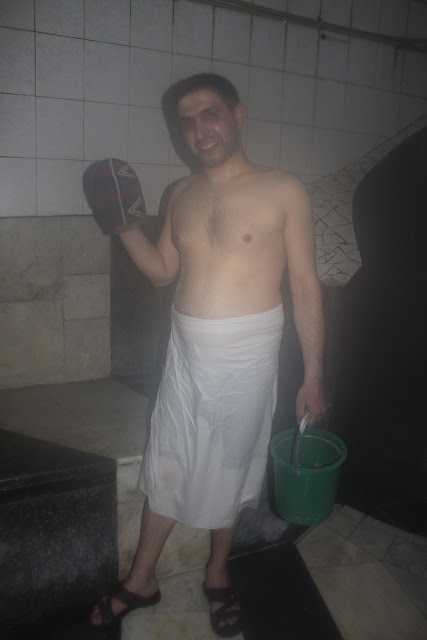 My entire body is tingling. I get dressed but my hair is wet. I go out to the reception where several Georgians are hanging out.
The masseur is now dressed, smoking and nonchalently playing backgammon with another man. He looks up and gestures for me to use the hair dryer which I do, right next to the smoking men playing backgammon.
This surreal experience reveals Georgia to be very liberal and, frankly, a bit strange.

We have spent two days on the road to Kakheti, in Eastern Georgia, visiting wine growers. They all have fascinating back stories: many started making wine as a hobby, buying country houses while retaining a base at the capital of Georgia, Tbsili. Some of them are now professional full-time wine makers.
There is laughing Nika Bakhia, the artist/sculptor who lived in Germany, who dresses in a curious peasant costume, ethno-chic. He surveys his vineyards, pointing to the black burnt patches where other local farmers, dubious of his new-fangled bio-dynamic methods, have set fire to his property. With tears in his eyes, he recounts how “five times” he has had to rebuild his vineyard. He’s put everything into this dream of making wine the ancient Georgian way, in Kvevris. In his house, he has removed his living room floor and dug up the earth to bury, neck deep, a dozen kvevris. His mother, looking like any East European peasant, turns out to be a rocket scientist, who worked during the Soviet occupation. I love his wine. I’m fast moving towards the idea that the more eccentric and artistic the person who crafts your food or drink, the better it tastes. 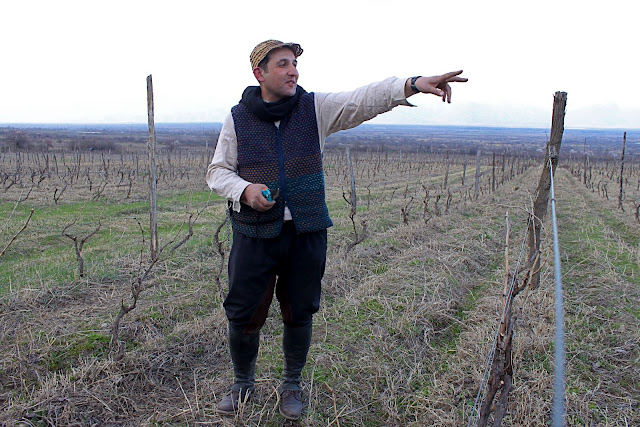 We stayed the night at a tiny bed and breakfast located in a winery called The Twins Old Cellar. One of the Gamtskitsulashvili twins is a professional toast master and polyphonic singer who entertained us over another long boozy ‘supra’ feast. Their grandfather was arrested by the Soviets for refusing to join a collective farm, so they seized this vineyard and sent him to a gulag where he died. Since independence from the Soviet Union, the twins have, with government help, refurbished the vineyard and restarted the wine making in kvevris. The Soviets left the place wrecked, the twins started with only 6 kvevri but now they have over 100 and have started to export their wine.
You sense that beneath the generosity and talent of every Georgian host, there is a tragic undertow of years of political abuse. It continues: the opposition leader of the rival ‘Georgian Dream party’ has been stripped of his Georgian citizenship so that he can’t stand in the election. Imagine if Cameron did that to Milliband! It’s a pity because the present incumbent, Saakashvili has done a good job modernising the country up till now. 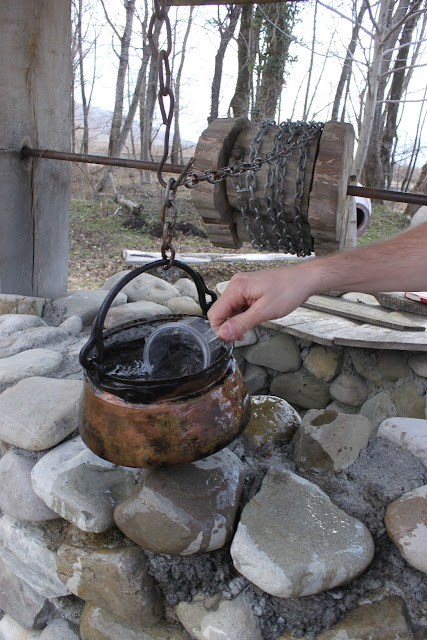 In the morning sun, next to a babbling brook, a well, and stony houses, we taste some more wines. This guy, Khakha Berishvili, is a Georgian vegetarian, wears hippy clothing and is a big jazz fan. This inspires myself and wine blogger Donald Edwards to characterise the wines by ascribing them musician’s personalities. “This one tastes like Iggy Pop, all sinews and wild eyed rocknroll”, Donald gargled.
“This one”, I’d retort, eyeing up a deep purple young red, so intense it stains the glass .“Reminds me of Diana Ross, just after she left The Supremes, wearing a slashed to the thigh, long inky sequin gown while singing ‘Aint no mountain high enough'”.
Donald gives me pointers of how to sound knowledgeable about wine: “Say things like ‘this is slightly lifted” or ‘volatile’ or ‘high toned’.” 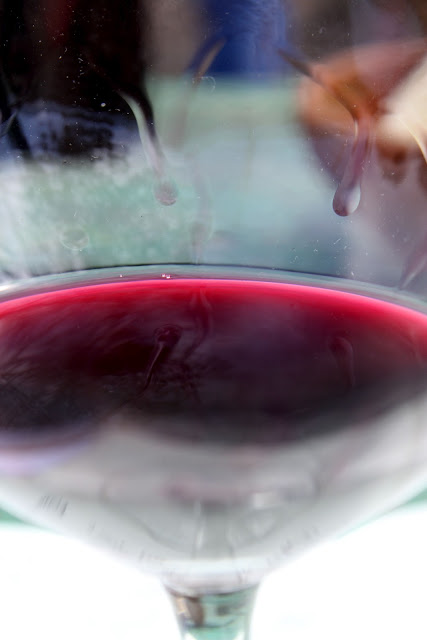 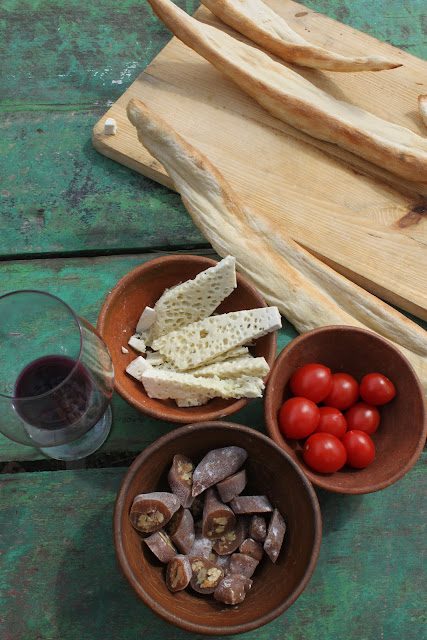 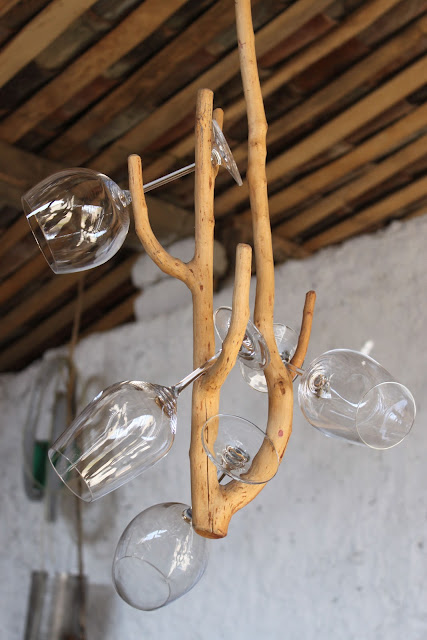 It’s tougher being a wine blogger than a food blogger: the audience is smaller and, as blogs are often visually led, wine is difficult to photograph in an original way. And I have to fess up here: I was the whiner on this wine trip. Every time we visited a new vineyard I’d groan, ‘Do we have to?’. The wine bloggers and Isabelle Legeron would look at me narrowly, as if they were tasting a particularly astringent wine. “It is a wine trip”, she’d say. The likes of Isabelle and Donald can think of nothing nicer than jiggling their glasses by the stem, sniffing, tasting wine all day, visiting one dusty vineyard after another. I don’t mind one or two but it doesn’t excite me in the way that food does, I find it difficult to truly differentiate between so many wines drunk in such a short space of time. We drink so much wine that we all end up with permanently black stained lips and teeth. 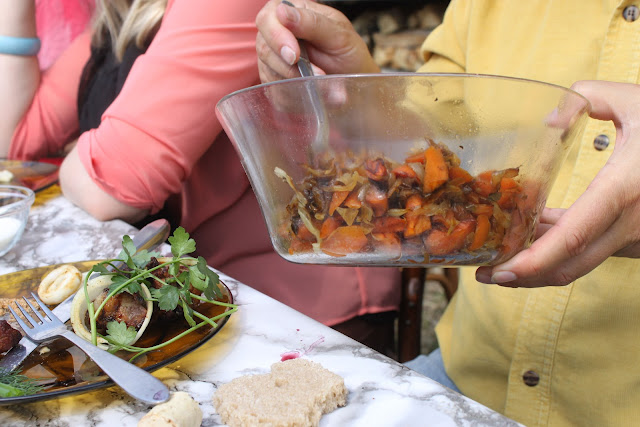 I’m on more comfortable ground when we visit Jean Jacques, a Swiss immigrant who is growing an ancient wheat ‘Dolis Puri’ in Georgia. Jean Jacques, like an increasing amount of people today, is gluten intolerant. This wheat, which stands shoulder high unlike today’s shorter wheat, contains gluten, but does not have the same allergic effect. He was inspired to come to Georgia by Nicolas Joly, the Gandalf of the bio-dynamic wine-making world – although he disapproves of the term ‘wine maker’. Jean Jacques, aided by a couple of woofers staying at his farm, made us one of the best meals in Georgia; fresh salty sheeps’ cheese, flavoursome bread and a variety of salads. 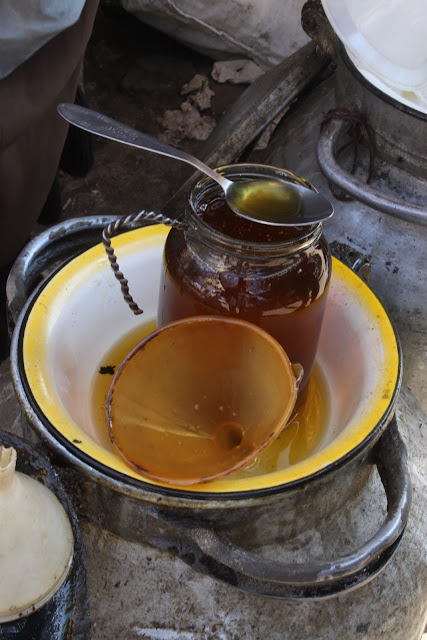 Sunflower oil, cold pressed, unfiltered, raw and intense. I brought a bottle back for the Postcards from the edge meal.

Georgian cuisine uses certain ingredients over and over again: tarragon, walnuts, pomegranates, aubergines, a fish shaped bread cooked in a tandoori style clay oven, tangy creamy buffalo yoghurt and tart mirabelle plums plus the best sunflower oil you will ever have tasted. I smuggled back a bottle of the sunflower oil in my suitcase which I will serve at this meal. I’m looking forward to riffing on Georgian food with my blogging colleague @foodstories who was also on the Georgian trip. This meal will include Natural wine selected by @isabellelegeron, organiser of the Raw wine fair this May. There are only 20 tickets. You can book here: http://www.wegottickets.com/event/161520.
I will continue my adventures on Georgia in my next post. Note: this post was written in Georgia font.