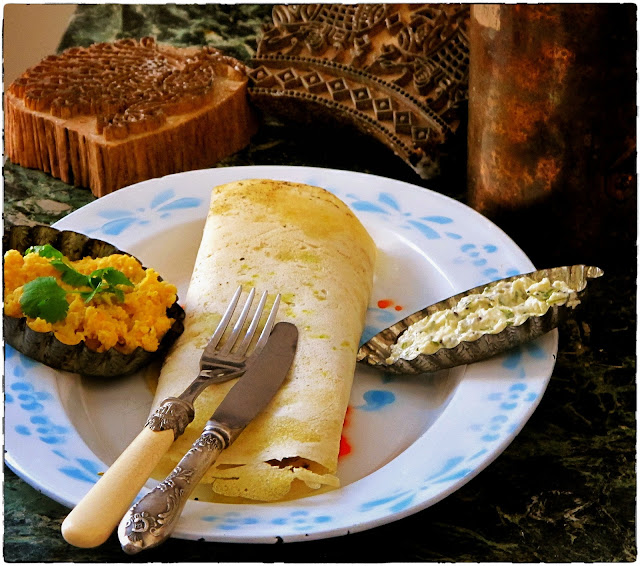 Pancake day was almost a week ago I know, but it’s taken me almost a week to make these Indian pancakes. Most cultures have some kind of pancake dish, and the Indian take on it is worth trying.
In Southern India they eat the Masala dosa, those long crispy thin crepes containing potato curry, traditionally served with coconut chutney and a lentil sauce.
I was inspired by my visit to Prashad vegetarian restaurant near Leeds where I enjoyed their ‘sour dough’ Masala Dosa, one of the best I’ve ever eaten. So when I embarked upon this savoury pancake , I used their recipe from their excellent book ‘Prashad’. Attempting this recipe is not for the faint-hearted: the components of the batter require soaking, grinding, frothing, fermenting and finally, cooking in a special pan. Unfortunately their recipe, which I followed to the letter, did not produce something as good as I ate in their restaurant.
The problem with cookbooks, especially those by restaurants and professional chefs, is that they are making all sorts of assumptions. Just because you can cook something superbly doesn’t mean you can explain it, with no steps missing, to the home cook. Writing recipes is very hard, I’ve missed out steps myself and sometimes only realise later. But we have a responsibility to readers, who’ve spent their money on ingredients and taken the time to try the recipe, although publishers, pushed for money, rarely pay for recipe testers except for big-time telly cooks.
It is said that the average cookery book buyer will only cook 3 or 4 recipes from a cookbook. Further, I’m willing to bet that not many readers tackle the tough ones. In my book Supper Club, there are a couple of recipes that I warn the reader about, saying, set aside some time for this, such as the timpano (giant pasta drum). I wonder how many people have actually attempted to cook it?
After my first attempt at Masala Dosa went wrong, flavourless and with the wrong texture, culminating with me sobbing into my batter on Saturday night, I spent several days looking at other Dosa recipes and Dosa YouTube videos. The Prashad recipe wasn’t bad but needed some tweaking and I hope I’ve put in some extra information that will help you succeed at home. It does take time to make, but the final results were well worth it.
There are different types of Dosa: 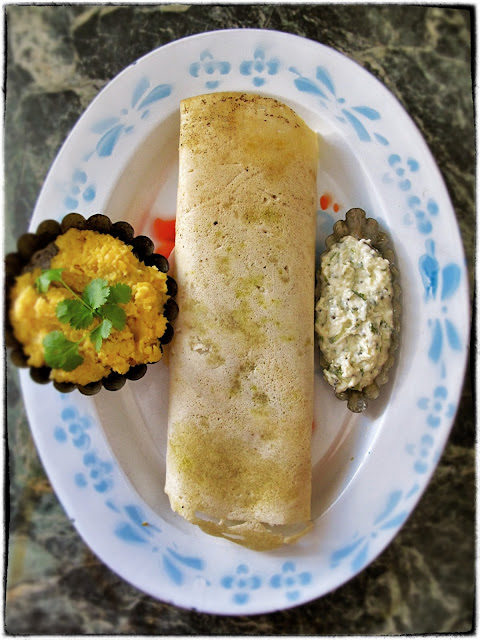 Ideally you possess a ‘tava’ or like me, you have a cast iron crepiere pan. (I bought this in France for half the price. I literally seem to mention this pan in every post.) But a flat frying pan, such as you use for pancakes, will suffice.
Batter for Dhosa:

275g broken rice or par-boiled rice (can be found in Indian shops under these names)
65g Urad Dhal (white lentils) Buy skinless, preferably whole. I used split which aren’t as good but work.
1/2 teaspoon of fenugreek seeds
1 tablespoon of salt
1 teaspoon of sugar
When you come to grind it you will need 300ml of water.

Soak the rice and the fenugreek for 12 hours.
Soak the Urad Dhal for half an hour at the end of the rice soaking period.
Drain the rice and dhal.
Grind in a blender, or food processor with the water. Do it in two batches. I used the Vitamix which grinds very finely.
Blend it really well until frothy, smooth and chalky.
Then put the mixture into a bowl and cover with a tea towel. Do not put it in the fridge unless you live in a hot country like India. It took 3/4 days for the mixture to ferment and I have a warm kitchen. Check it every day. When it’s bubbly and tastes a bit sour, it’s fermented.
You add the sugar and salt.
This is very important because if you cook the batter when it isn’t sufficiently fermented, the Dosa will be heavy and tasteless.
Then take your flat pancake pan and heat it up until hot. Cool it down with kitchen roll dipped in cold water.
Add a little ghee or vegetable oil or coconut oil to the pan then put in a ladle of the batter. Work quickly with the ladle skimming the top of the batter, spreading the batter out into a large circle. The Dosa should be thin.
Add more ghee to the Dosa, sprinkling it around the edges and centre.
The edges will curl up when it’s almost cooked, then you must use a very thin flat fish slice to loosen the Dosa from the bottom of the pan.
Place your chutney or potato curry in the centre. I don’t see why you can’t add any curry you happen to be making to a Dosa, although traditionally it’s a potato curry.
When the underside is golden, start to fold over one side of the Dosa, then the other side.
Serve also with fresh coconut chutney and a sambar lentil dish. For those recipes you must buy the Prashad cookery book. 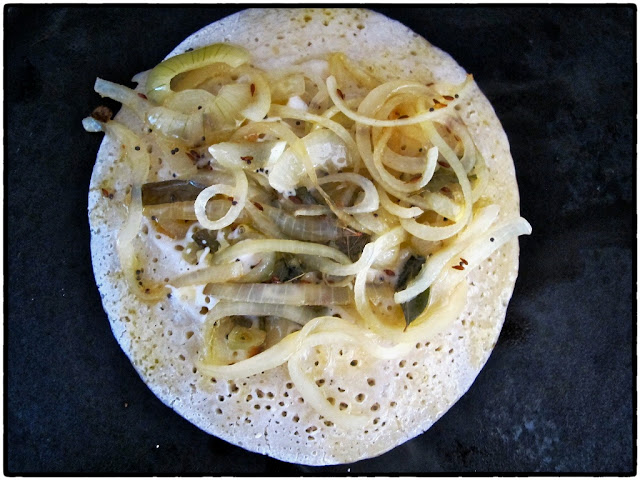 I once went out with a man who said that Uthapam and Janssen’s Temptation were his favourite foods, neither of which I had tasted at that point. He was a complete wanker but he did have a great palate. Better than this date or this one. Yes I’ve got a whole collection of disastrous dinner dates.

Anyway, forget men, make an Uthapam, which is frequently referred to as a kind of Indian pizza, but having made it, it was more like large shallow subcontinental crumpet. It doesn’t need to be spread out in the same way as the dosa. The dough on top doesn’t need flipping over. It’s one of the best things I have made in ages.
I made it with onions fried in ghee, with mustard seeds and curry leaves. You could try garlic, paneer and tomatoes for that pizza feel.

Heat the ghee in a small frying pan. Add the cumin seeds, then the mustard seeds. Let them pop.
Then add the onion, chilli and curry leaves until the edges of the onion are golden and the centres are soft.
In your tava or flat pancake pan, add a little ghee, then put in half a ladle of the Dosa dough. The circumference should be about 8-10 cm’s (4/5 inches) and half a centimentre thick (1/4 inch). Let the bottom cook and add the onion on top.
You will see the dough bubble like a crumpet.
Add a pinch of salt and eat it all up. Then, probably, make another one and eat that all up too. Mmmm.. 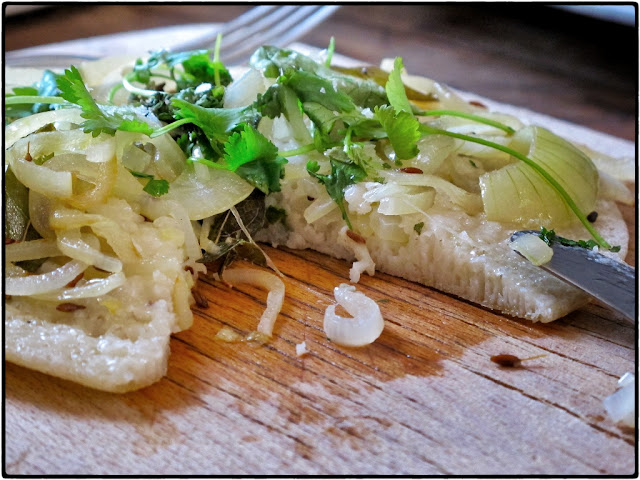