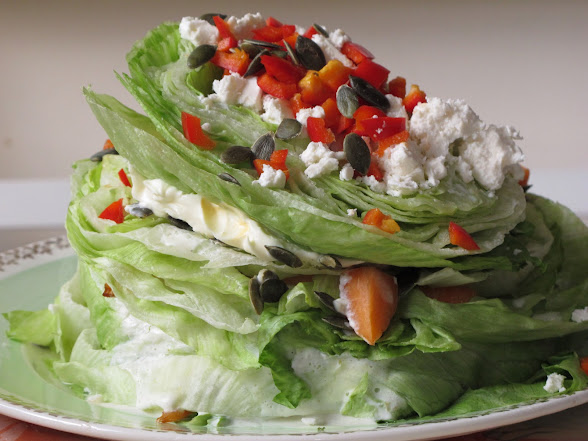 One of the cookbooks I’ve most enjoyed recently is by a blogger, Deb Perelman of The Smitten Kitchen. It’s charmingly written with a dry, wry, warm, frank and chatty tone, reminiscent of my heroine Nora Ephron, another smart talented New York Jewish girl. It’s also fantastically photographed by Deb. If you look carefully, all of the pictures are taken on one laminated fake granite kitchen surface, next to a window, in her tiny kitchen. But it looks professional, simply lit, but giving you all the info you need about the dish while looking good. Finally and most importantly, the recipes are just great. The sort of stuff you just want to cook all the time. In most cookbooks you see, maybe, three recipes you want to cook. On this one, on almost every page you inhale and say ‘I wanna make that’. That is the mark of a great cookbook.
The United States is waaay ahead of us in terms of blogging. They have blogger superstars: The Pioneer Woman cooks aka Ree Drummond (whose story has just been bought up by Hollywood which will make it the second film about blogging but again about a food blogger. (The first was the Nora Ephron directed movie starring Meryl Streep, about Julie Powell of Julie/Julia). Deb’s book is number two in the New York Times best seller lists.
Just think, in five years time in the UK, we will have a handful of big deal bloggers, the ones with klout equal to newspaper columnists and tv chefs.
I have nicked one of Deb’s recipes. It’s really simple as is much of her stuff. I’ve tried some of her other recipes and its such a relief to cook from a book that has obviously been so thoroughly tested in a domestic kitchen by the author.This recipe is all about the iceberg lettuce, the humble, unchic, non-artisanal, crisp, light green ball of crunchy leaves. As Deb points out, there are times when nothing else will do. You don’t want trendy salads, peppery rocket, or beetrooty red leaves or radiccio, you just want an uncomplicated lettuce. That you don’t even have to wash.
She makes it look chic and tasty of course. Her technique is to cut it into slices, layered in between with a creamy dressing and other salady bits and bobs. I’ve changed her original recipe with blue cheese, radishes and celery into my version, with goats cheese, baby carrots and seeds. Because that is what I had in the fridge. I also added one of my favourite ingredients, yuzu paste, a Japanese citrus. You can buy it online. I love it, it makes everything taste special.
Ingredients:
1 iceberg lettuce, sliced horizontally into 1.5 cm thick slices
Baby carrots, quartered,
Pumpkin seeds
Finely diced red pepper

Dressing:
150g of goat’s cheese
2 tablespoons of sour cream
25ml of milk
1 tablespoon of yuzu
Assemble, putting some of the ingredients on each layer plus the creamy dressing. 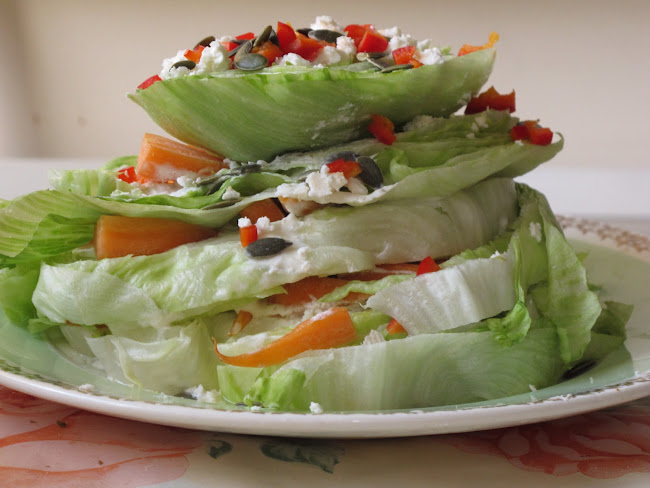