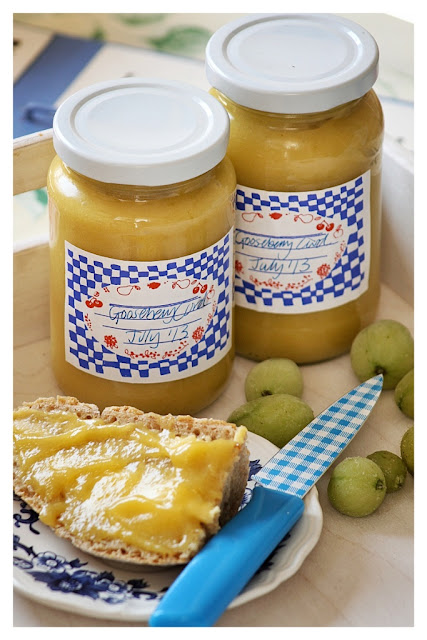 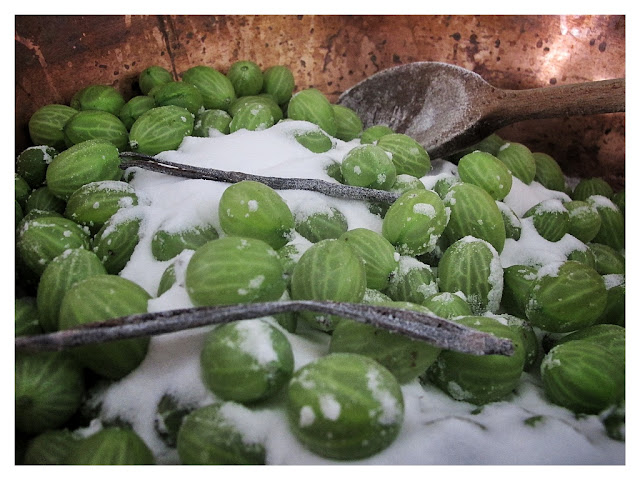 A lovely lady from Twitter, living in Norfolk, met me at Kings Cross station, platform 9 3/4, near where Boudicca is reputed to be buried, to do a secret handover of a large bag of gooseberries. I couldn’t be more thrilled. A recent order of gooseberry punnets from my supplier cost £3.14p for 100g! I made a gooseberry fool, parsimoniously eking out the fruit.
So this weekend, armed with my bounty, I went mad on gooseberries: curd and jam. Gooseberry pies are in the offing too…
In my mum and dad’s old house in Highgate, there was a gooseberry bush at the bottom of the garden and as a child, I was disappointed by the sour taste of the bright green fruit. Gooseberry is another name for the devil and eating them was the punishment for losing games.
Today, sour flavours such as pomegranate, hibiscus, lemon and lime are my favourite. A few weeks ago I made passionfruit curd which I injected into doughnuts. I’ve now got a bit of a curd obsession.

Sterilise two jars by rinsing them in hot water then putting them in the oven at 180ºC for half an hour. (I stand them, open side up, spaced so they aren’t touching, on a baking tray lined with a tea towel or newspaper). If you haven’t got new lids then have cellophane or wax seals for the tops of the jars.
Rinse the gooseberries and cook them with the water on a low heat until the gooseberries have burst and become soft.
Push the gooseberries through a chinoise or sieve with a wooden spoon or spatula into another pan.
Add the sugar and butter into the gooseberry mixture while it’s still hot, stirring until it is incorporated. Working quickly, whisk the eggs and add them into the mix.
Put the pan back on a low heat and stir continuously until the mixture is thick and custard like. This can take about 20 minutes.
Take off the heat and let it cool. Transfer to your jars. Put on a pretty label and you can keep these in the fridge for at least two weeks.
This mixture can be spooned into tartlets, spread on toast or scones or yes, piped into doughnuts.