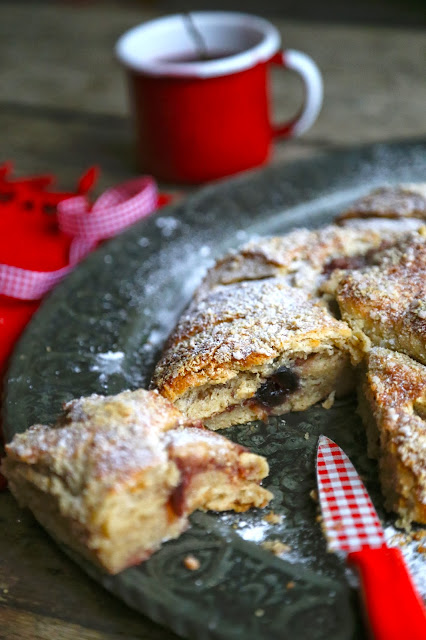 This Kringle recipe is for those who aren’t on a diet this January as it is very rich.
Denmarks cuisine and great produce is rightly known to food lovers around the world. While Noma is a famous ground-breaking fine dining restaurant, the Danish are celebrated for their baking, particularly Danish pastries. Many Danish bakers have a ‘kringle’ sign outside their shop, which is in the shape of a pretzel, but is a sweet marzipan pastry. I’ve done a big one here, but halve the ingredients for a smaller kringle.

Method:
Put the yeast and 1 tablespoon of the sugar into a jug with the lukewarm milk. The milk must not be too hot or it will kill the yeast.
Leave it until you see some froth/bubbles then add the cream.
Mix the flour, salt, cinnamon together then cut in the butter, until it looks like breadcrumbs.
Then combine this with the yeasty cream mix.
Put in a bowl covered with cling film and leave overnight in the fridge.

Make the filling by mixing all of the ingredients except the cherries in a food processor. Then add the cherries. You want them whole so you can see them clearly in the Kringle.
Preheat the oven to 180cº. Prepare a large flat baking try with silicon paper or a silicon mat.
Remove the chilled dough from the fridge and roll it out, on a very well floured surface, to a 40cm square, about 3mm thick. Fold in either side to make a long thin rectangle. Then roll it out so that it becomes a 100cm flat sausage, about 7 cms in width and 3mm in thickness.
Scoop the filling all down the centre then bring the sides in, pinching them together.
Carefully and at the same time flipping over your sausage so that the seam is underneath, place the kringle onto the baking tray. Bring in the ends so that they cross over and form a pretzel shape.

Brush the top with the beaten egg white and sprinkle with the nibbled sugar and ground almonds.

Bake for 40 minutes. Leave to cool then dust icing sugar over the top. 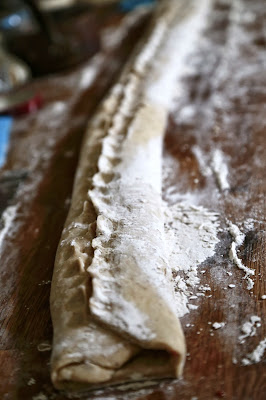 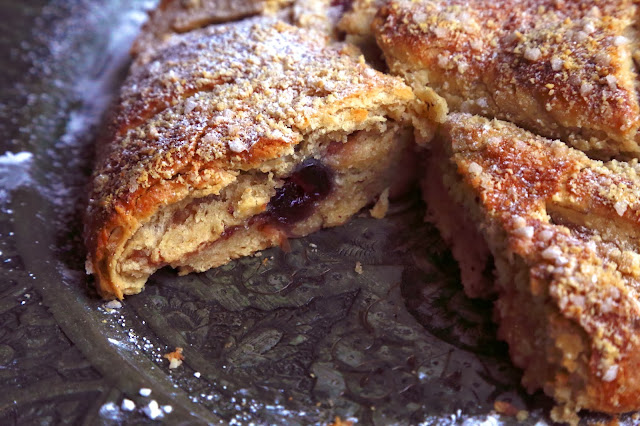 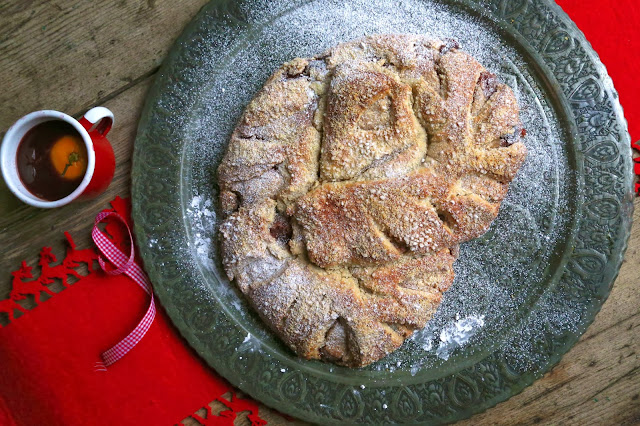