Koreans are laughing at my food.

Did you know? I’m big in China. Last year I noticed my stats were doubling, tripling. I followed the trail, via the analytics on my blog, back to Weibo, which is the Chinese equivalent of Twitter. A famous Chinese food blogger had discovered my blog and spread the word.
Now I’m at the forefront of a trend in China ‘dark cooking’ or ‘twisted cookery’ as it’s referred to in this article in the China Times. According to journalist Yin Lu, the term ‘dark cooking’ originated in a ’90s manga Chka Ichiban! (‘China’s Number One!’ or Cooking Master Boy). “In this fictional universe, the evil Dark Cooking Society’s goal of controlling the country is foiled by a young boy with prodigious cooking talent.” Another translation of Dark Cooking Society is The Underground Cooking Society (reminiscent of the name of my supper club The Underground Restaurant). In the manga, the highly trained chefs that are members of the society have to find eight Legendary Cooking Tools. They need to master these in order to gain absolute power.
I’m not sure what to make of this development. Often with themed supper clubs, I’m trying to be playful, make ‘foodie’ jokes. Looking at the pictures of my food on the forums, the food on sticks, the stuffed banana for comedy night, the overblown meringues, the Spitting Image Thatcher-pops, the stargazy pie, it did strike me that some of my food, selected here for outrage, is quite ridiculous.  Perhaps it’s a good thing that I can’t read Chinese. Presentation is important, ideas are important, but I can assure my Chinese readers that I always cook for flavour.
Some comments on the blogs from Chinese people on my/English food:

Sylvia_ Lin
Dangerous Game 9
Go to England, when that special delicious hotel breakfast, buffet, traditional meals, toast bread Sausage bacon mushroom omelette or something. There are a variety of cereal and a variety of fruit jam yogurt from ride. Obviously have to eat very little motion sickness only epoch every morning to eat a lot and then got started playing dead people. . . 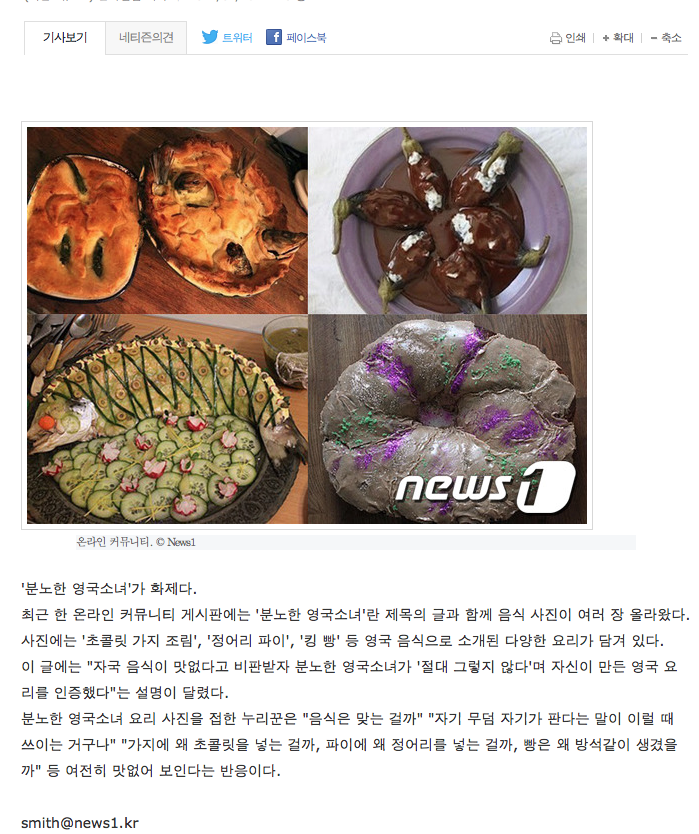 Now my reputation for twisted cookery has spread to Korea. I’m getting views from this page, photos at the top. I think I’ve even been mentioned on Korean telly (above). Running it through Google Translate I’m referred to as ‘Angry British girl’.  How did they know?