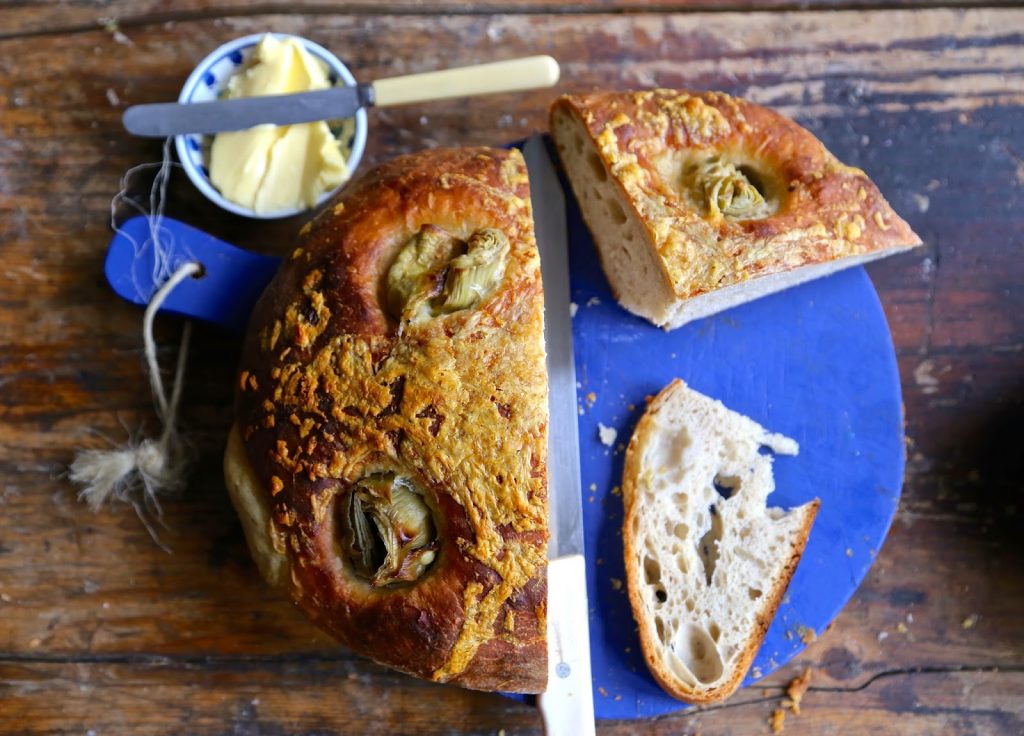 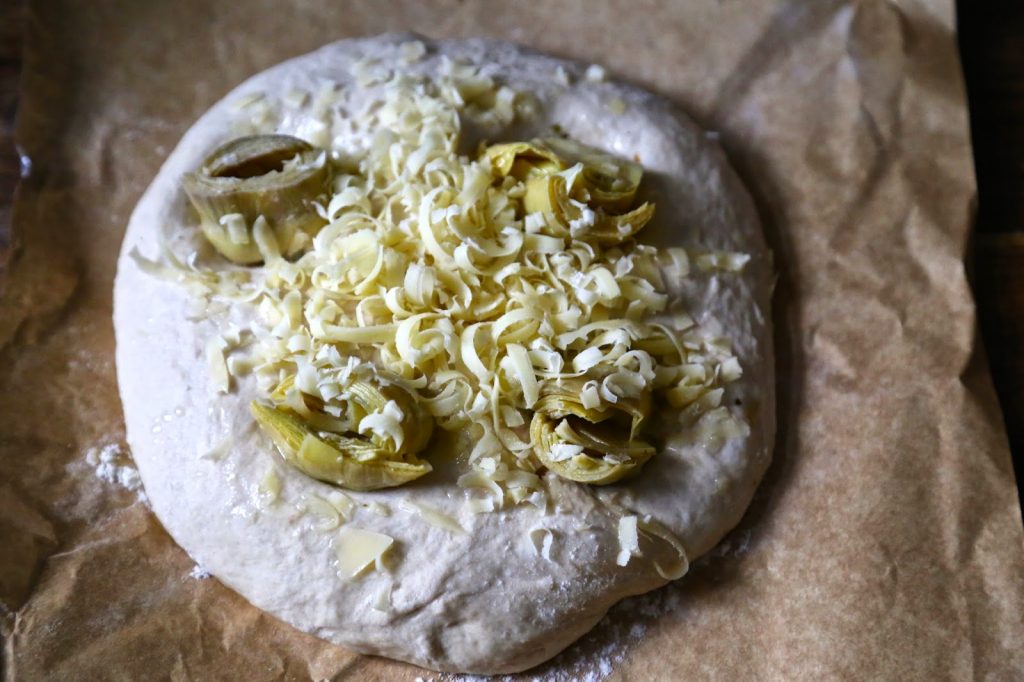 I love artichokes, those beautiful thistles. I never get tired of them. I like their bottoms, their hearts, fresh ones, tinned ones, the ones in oil, the ones in brine even, the young ones and the old ones. I’ve even grown them in my garden and for the last couple of years have been eating home grown (but I only get one or two per year). This recipe is a culinary ode to a menu item served by Duck and Waffle restaurant (which has fantastic views and great cocktails by the way) in London. This cheesy bread features artichoke hearts sprouting from doughy bowels. I’ve done two versions: a big loaf, Duck and Waffle style, and smaller, artichoke bread ‘buttons’.
If you can get whole artichoke hearts, marinated in oil, sold in jars, that’s best and tastiest. I had some gorgeous tiny whole ones in Sicily last year which cost about 5 euros a jar. At a recent visit to Borough market, a similar jar cost £17, about 20 euros. Yikes. I’m still searching for reasonably priced but fabulous artichoke hearts in London. You get what you pay for though. I’ve tried many brands and none of them were as good as the proper Italian ones.
Otherwise use the quarters of artichoke hearts that you often see in supermarkets, marinated in oil.

White dough recipe adapted from Richard Bertinet’s Dough book.
Mix the yeast, flour, salt, water together in a bowl or stand mixer. Then knead for ten minutes or using the dough hook, mix for ten minutes at a low speed.
Cover with a damp tea towel or clingfilm and leave until doubled in size.
Then add the grated cheese, reserving some to sprinkle on top.
Form a round ‘boule’ loaf and prod the entire artichoke hearts into the top of the loaf so that only the leaves of the heart are sticking up.
Preheat the oven to 250ºc Cover and leave to rise again for half an hour.
Place the bread on a baking sheet lined with parchment paper. Spray the inside of the oven with some water. Bake for ten minutes then sprinkle a little cheese on top. Lower the temperature to 220ºc and bake for another 20 minutes or until golden brown. 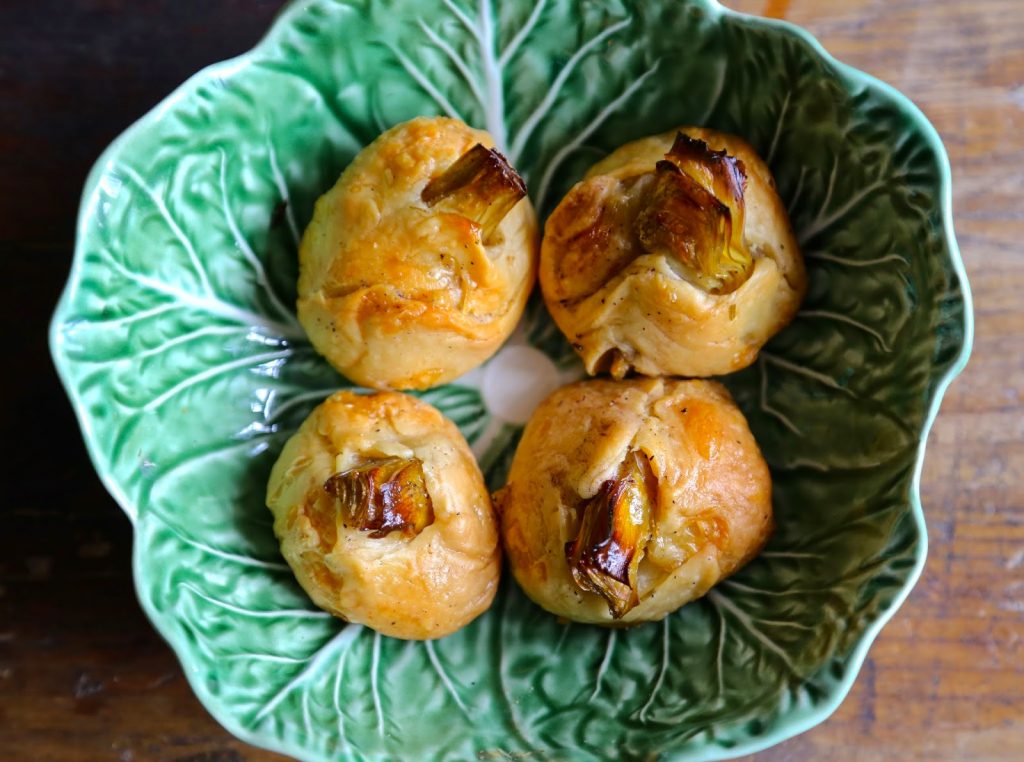 These are great for canapés and I’ll be serving them for next week’s Raki supper club.
The dough recipe is from Richard Bertinet’s ‘dough’ book, the olive dough.

Mix the flour, semolina, yeast, salt, olive oil and water together in a bowl or stand mixer. Knead for ten minutes or mix with a dough hook for ten minutes on a low speed until the dough is coming off the sides of the bowl.
Oil a bowl with olive oil and leave the dough, covered with a damp tea towel or clingfilm, until doubled in size.
Prepare two baking trays with a silpat or parchment paper. Then, treating the dough carefully, cut it up into 25ml sections, weighing on a digital scale if you have one. Form a neat ball by tucking the dough underneath so that the ‘seam’ is underneath. Place the balls on the baking trays with a couple of centimetres gap (an inch) between each ball.
Then prod each artichoke into each ball of dough, pressing it down firmly.
Preheat the oven to 230ºc. Cover the balls and leave to proove for another half an hour.
Spray the oven with water. Bake the trays for 10 or 15 minutes until golden.
Brush with olive oil and sprinkle with rosemary salt.
Serve warm.