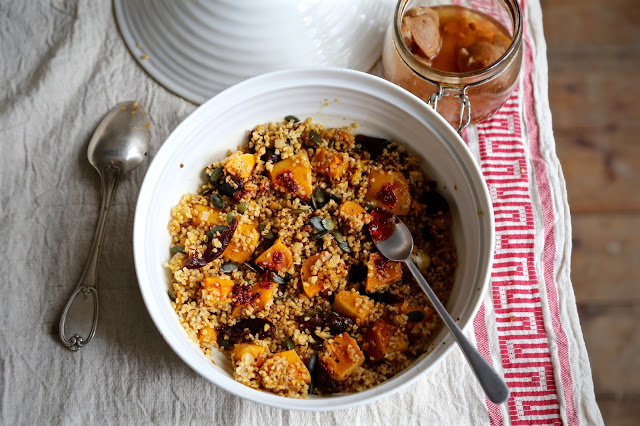 I’ve been playing with my tagine recently. The one I have is made of fine white porcelain, designed by Sophie Conran at Portmeirion (£63 but do shop around, you can get it cheaper on other sites). It looks so elegant, one can scarcely believe that you can use it directly on heat but you can. I use it on the top of my Aga, but it’s also safe to put it in the oven.

A tagine, sometimes spelt tajine, is a kind of stewpot with a funnel shaped lid, the shape of which encourages condensation which runs up and then down the inside of the cone. This makes for beautifully moist stews without the dilution of flavour and overcooking that can occur in a normal stew.
Obviously in Morocco they generally use it for meat stews and occasionally fish. I’ve been creating gorgeous vegetable stews, using Middle Eastern spices and employing a range of sweet and sour flavours, very typical of that region. We used to cook like that here in Europe, in the Middle ages; this is where mince pies came from, which were originally made with minced meat as well as dried fruit and spices. Eventually the meat part was ‘lost’ and we have the purely sweet mince pies that we eat at Christmas today.
Another tweak I do is to put the couscous or say bulgar wheat in the tagine and make a kind of one pot stew. Usually a tagine stew is eaten with bread or couscous made separately. Bulgar wheat works very well as it cooks quickly, taking the same length of time as the vegetables. For that reason you may also use quick cook couscous rather than the proper stuff. Normally I wouldn’t let you do that you see. I’d come round your houses and shout at you all. NO QUICK COOK COUS COUS, NO QUICK COOK PASTA EITHER WHILE I’M ABOUT IT. I’m so wasted as a blogger. I really should be in charge of everything. 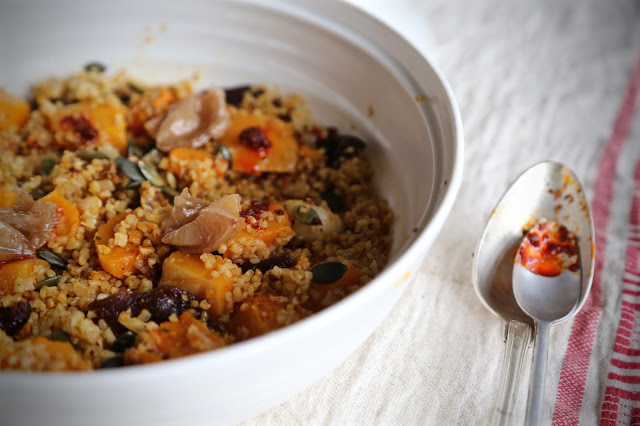 Firstly, let’s get the bulgar wheat ready. I use the same technique as I do for couscous, carefully spelt out in my book V is for Vegan. You’ve bought it, right?
Spread the bulgar wheat out on a tray and sprinkle it with boiled salty water. Repeat another twice at intervals of about ten minutes.
While that’s going on, prep all the veg.
Put the butternut squash on a baking tray, toss it in some olive oil and shake some paprika, crumble some sea salt on it. Place in the oven for ten minutes. Remove and set aside.
Put the tagine onto your stove top on a low heat, add the vegetable oil and soften the onions for about ten minutes or so. Then add the garlic and spices. Add the butternut squash squares and the bulgar wheat.
Add around 150ml of vegetable stock and the apricots. Put the lid on and let it cook for around 20 minutes. Then check the bulgar wheat is cooked, if not continue to cook. At this point you can also put in the pumpkin seeds.
When the tagine is ready, stir in the preserved lemons. Garnish with fresh coriander, a dribble of Argan oil and dot with rose harissa.

I also did another one with couscous, carrots, black olives and mulberries. Basically you can shove any pleasing combo of veg/salty thing/sweet dried fruit. It’s all good. If you don’t have a tagine then you can use a heavy bottomed saucepan or casserole dish with a tightly fitting lid. Not as pretty, granted, but still works. (C’mon you know you want a weirdy cone dish on your kitchen shelves at heart, it’s so very Habitat innit?). 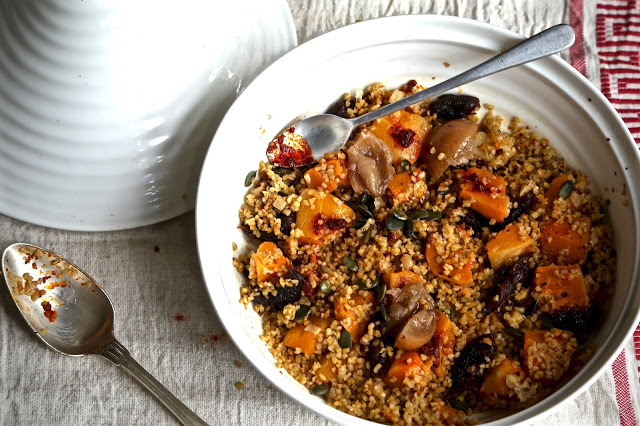