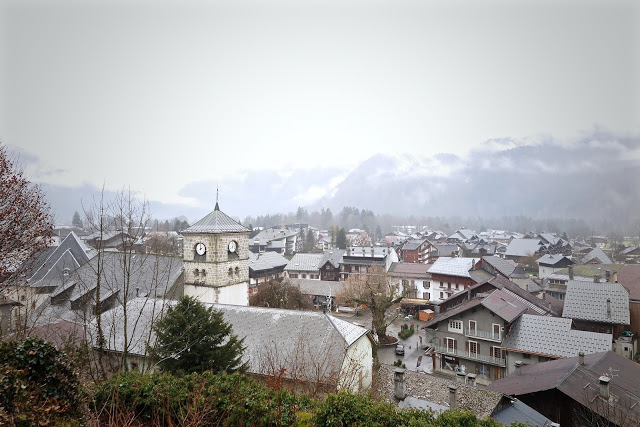 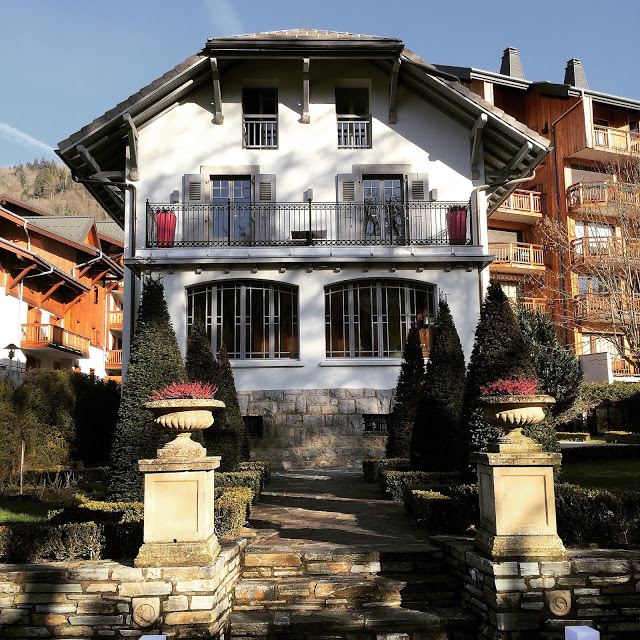 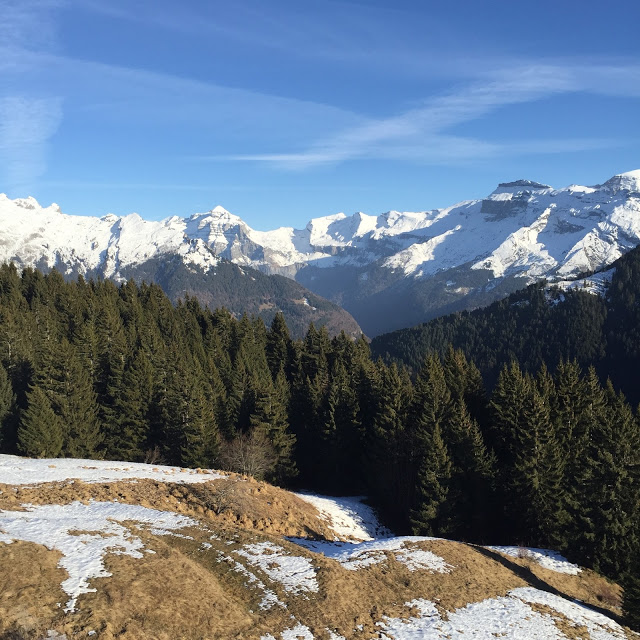 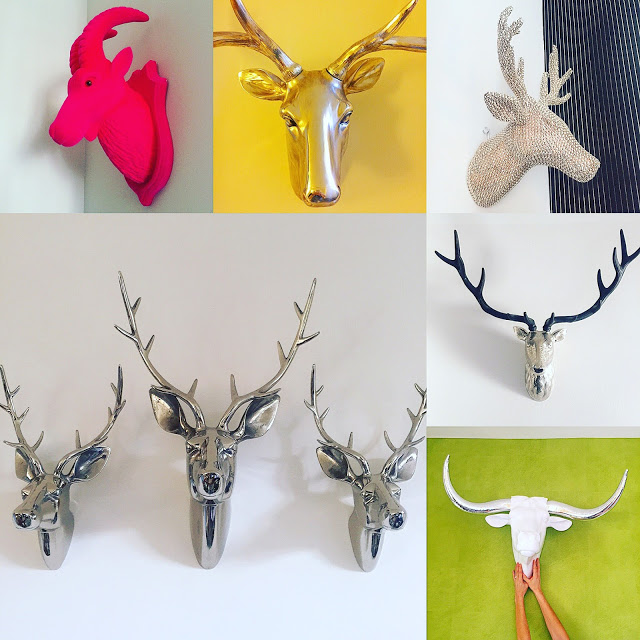 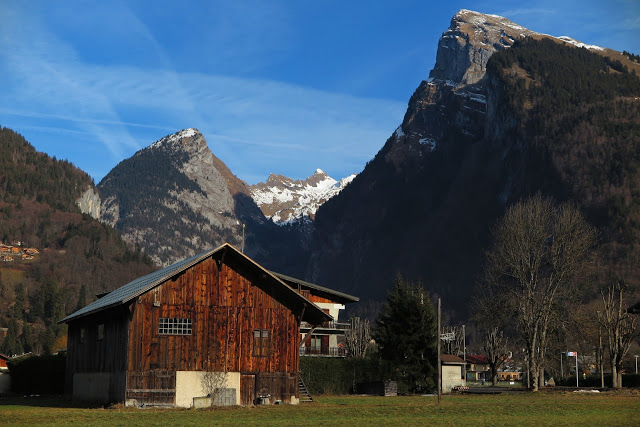 This Christmas, I visited the small alpine village of Samoëns, near to the Grand Massif web of ski runs. French ski resorts tend to be more modern than Austrian or Swiss resorts and as a result are often somewhat ugly, blighted with high rise flats catering for the French for whom skiing is a national sport, almost a right. Most French school children go skiing in the winter holidays, if not with their parents then with the school.
Samoëns, by contrast, is small and romantically pretty; a jigsaw of low rise stone and wood buildings with chalet style balconies. This architecture is typical of the Savoy region, which is almost entirely mountainous, stretching south of Geneva down to Nice. Savoyard culture and food historically crosses national boundaries, girdling the alpine regions of France, Italy and Switzerland. 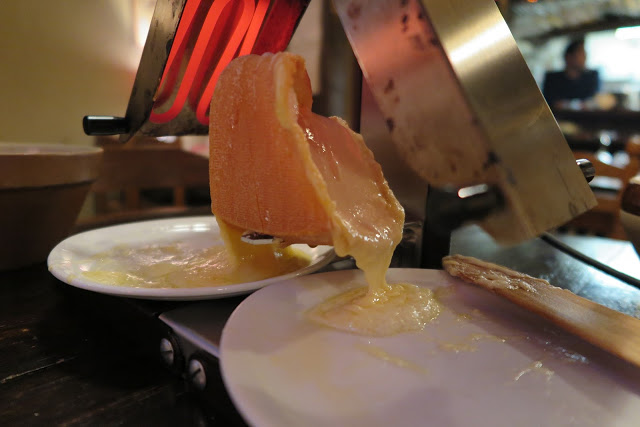 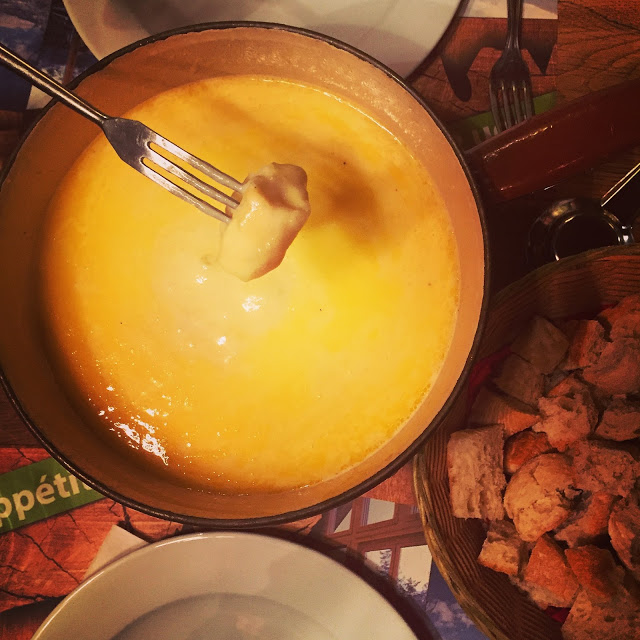 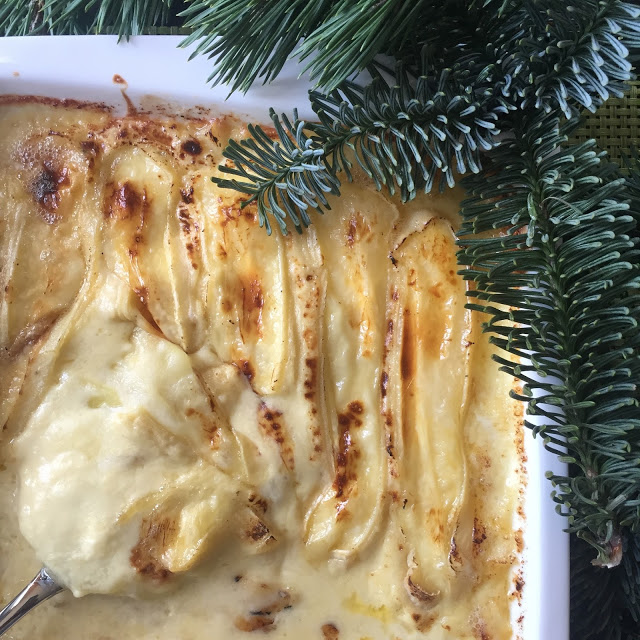 Savoyard cuisine is perfect for the climate: hearty dishes such as Raclette, Tartiflette, Fondue Savoyarde; cheeses like Beaufort, Tomme, Gruyere, Reblochon; cured meat and sausages referred to as ‘Diot’, while polenta tended to be more popular than potatoes. For my tartiflette recipe go to my monthly column at the Ham & High. 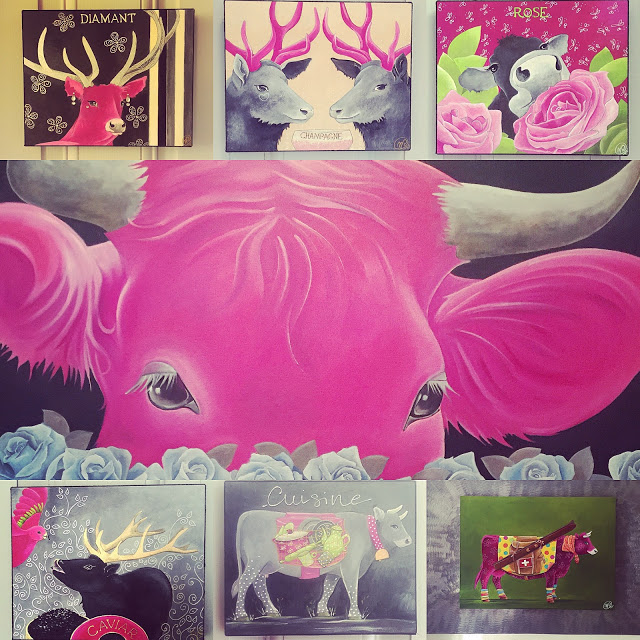 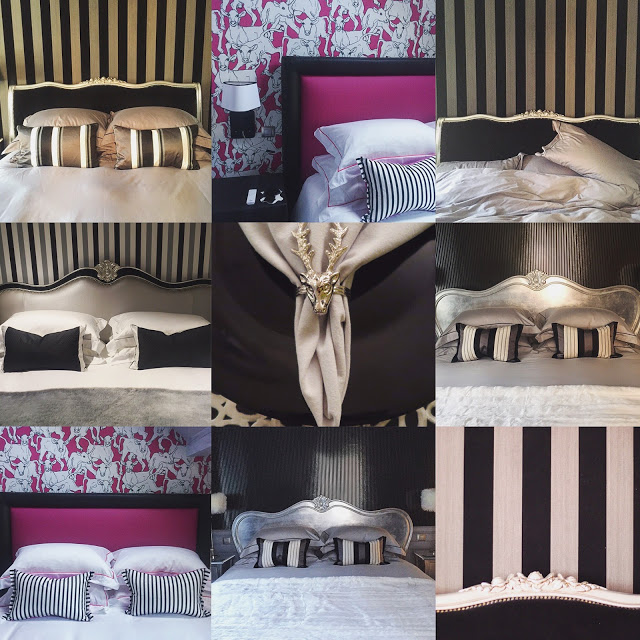 I stayed at a boutique hotel Villa Rose housed in a Belle Epoque circa 1900s villa, which only opened in May 2015. This is the dream project of Texan Kimberly Williamson, who supervised every aspect of the decoration using only local artisans, materials and products. It’s a far cry from the rustic chalets of the alps, all pine and checkered tablecloths; here the style is more elegant and contemporary with silvered bedheads, upcycled antiques, beautifully appointed bathrooms with claw foot bathtubs, flocked wallpaper, glinting chandeliers, whimsical paintings of cows and stags on doors, and a strict palette of pink, silver and black except for the kitchen where apple green is sported. 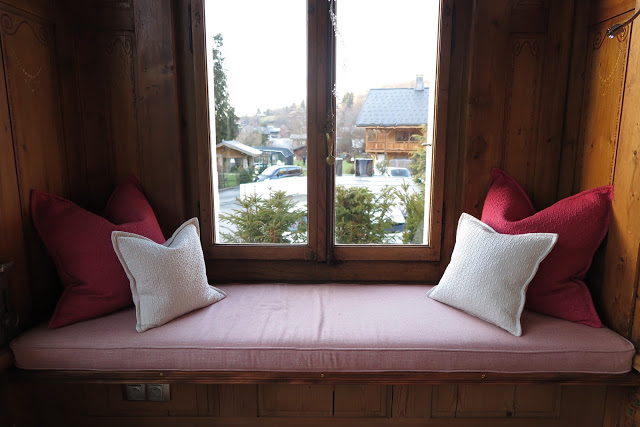 Downstairs has a different style: a comfortable living area with coloured stained wooden floors by local artist Gilles Giacomotti, and an enclosed veranda with a pink velvet sofa and cosy nook window seats overlooking the ski lifts and mountains.

The ski season starts on December 19th when the lifts open, but like everywhere in Europe, a warm winter has meant that snow was sparse. (I believe January has now had fresh snow so conditions are better.) Samoëns is also a summer resort.

1) Ice Skating. There is usually a rink at every ski resort and Samoëns is no exception. You can also go tobogganing on a artificial slope in the village. At larger resorts you will find swimming pools, saunas and jacuzzis, which is a boon for après-ski. Villa Rose also has an on-call masseuse.

2) Christmas activities: the main square of the village has concerts, games and other ‘animations’ during Christmas time: a jolly girl group harmonising in Santa outfits and old-fashioned wooden games for the public to play. The village is lit up with lights and Christmas music is piped through the pedestrian streets, it’s all charmingly Disney-like. (I love Disney.)

2) Shopping. Samoens has many small boutique shops selling handicrafts and local products. I particularly liked the interiors and kitchenware shop, the quincaillerie, where I bought a wooden radiator brush. (Longtime readers will know that I do like a well crafted brush).

3) Walking. You can walk in the hills, alongside the bubbling river or visit the local Botanical Gardens, which contains thousands of alpine plants. If you walk enough you will deserve to…

4) Eating. Even if you don’t do any exercise you will have a huge appetite and feel tired, especially if you come from a smoggy city like London where the merest whiff of fresh air is a jolt to an urbanite system.
Samoëns has some good local food shops, a boulangerie, places to buy cheese and cured meats, if you don’t have a car.
There are nice places to eat (the raclette at Gourmandises de Marie was good, as was the friendly lunch at Les Tartines de Martine) but French service is a problem, I don’t know why. You expect rudeness in Paris but not in a small village. I had a terrible experience in one restaurant called La Tornalta, where the waitress said she wanted to hit me because I asked for a green salad with a dressing not out of a bottle.
Tourists should specify the size of the drink they are ordering as apparently it is a common trick to give the largest version and charge accordingly. This happened to me at a bar in the village, I ordered Gentian, an alpine bitter herbal liqueur made from the gentian root. It’s usually around three euros, but the grumpy bartender poured me out a huge glass (too much to drink) at six euros. 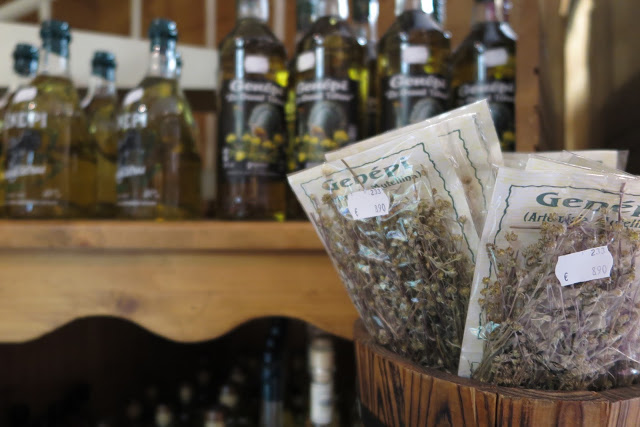 Perhaps this is why Villa Rose only employs Anglophone staff all of whom are delightful and bend over backwards to give good service. Selina the manageress will sort out ski gear for you and give you a lift to the cable car in Samoens, however there is also a shuttle. Talking to the staff at Villa Rose, many of whom lived in the village and had children in the local schools, they all raved about living there, the sense of community, the special vibe of the village. 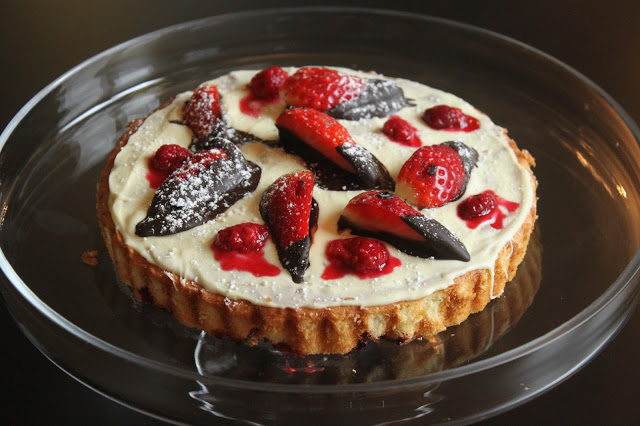 Villa Rose has a private chef, Daniel Bearcroft, who can prepare evening meals depending on the package you choose. He provides a cooked breakfast and charmingly, a cake every day for tea time. Find him @alpinechef on instagram for a look at his dishes. 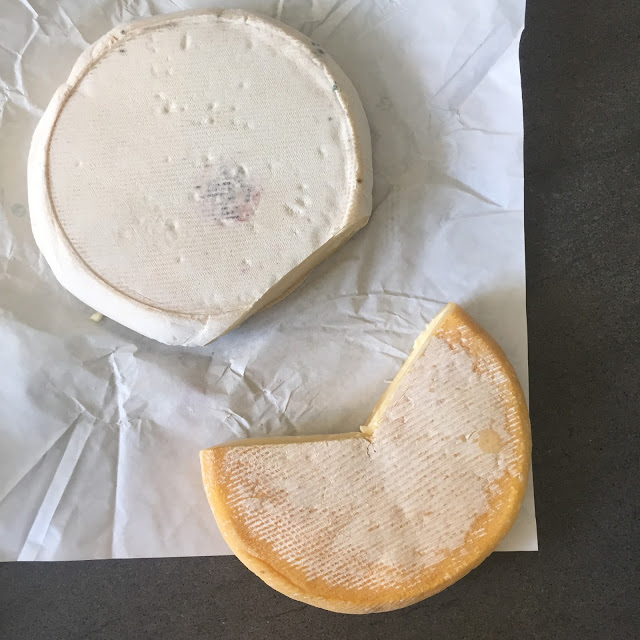 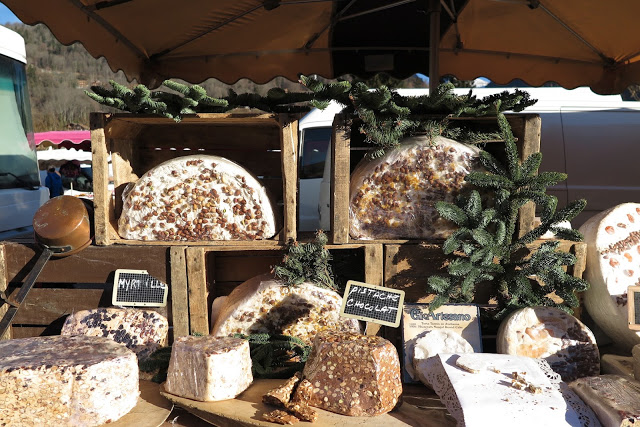 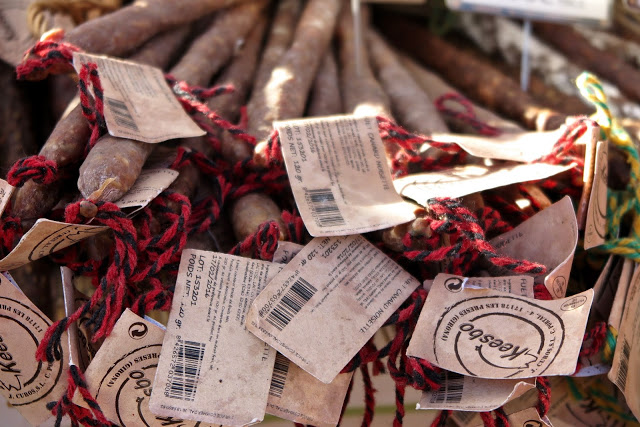 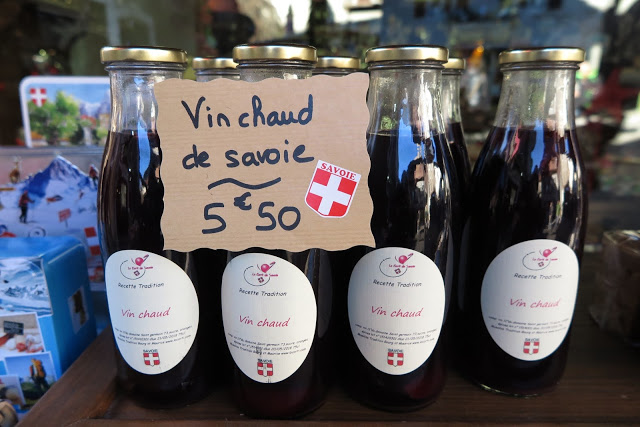 5) Going to the market, which is open on Wednesday mornings in Samoëns. The market sells great food, handicrafts, local products, alpine themed oil cloths and cheap clothes.
I was in my element here but to know which stalls to buy from, look at those that have queues of locals. One cheese stall tried to charge me 50 euros (£40 or over $50) for a Brillat Savarin cheese (500g) that would normally cost a maximum of 10 euros, so shop wisely.
I lined up at a brilliant stall selling raclette from the back of a farmer’s van and bought a quarter wheel for 10 euros. Bargain! 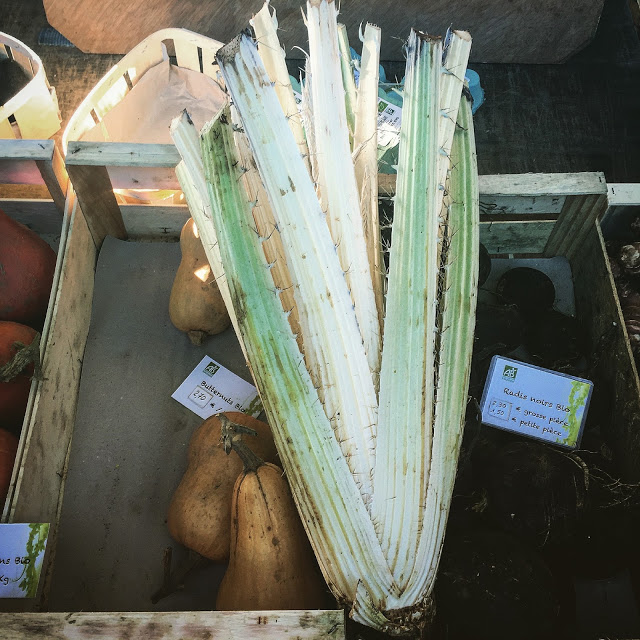 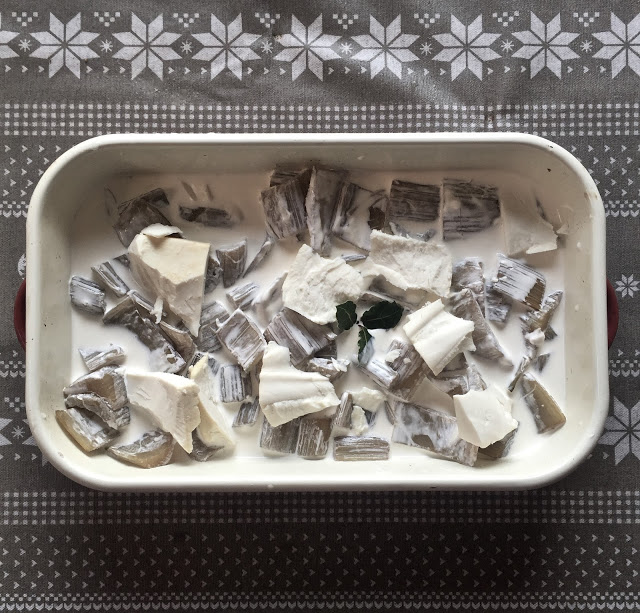 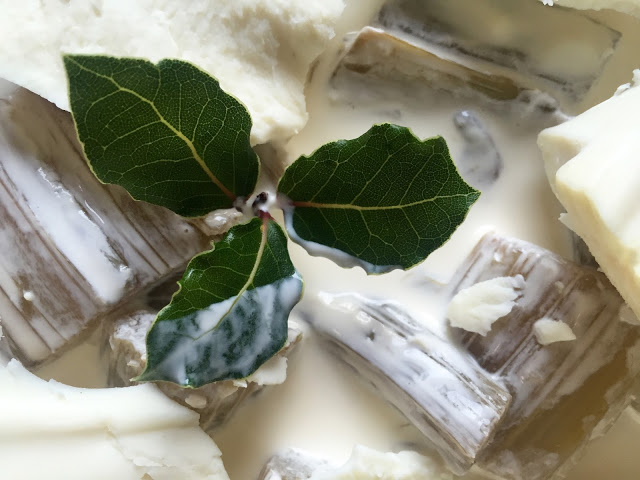 If you are self-catering in the winter, do look out for cardoons (cardons), which look like a spiky celery. They aren’t cheap but are a local delicacy: ‘l’épineux de Plainpalais’ in the Christmas season, tasting a bit like artichokes, for they belong to the same family of thistles. I considered squeezing an entire cactusy cardoon in my suitcase along with my ski boots but ended up buying them ready prepared, that is, freshly cut into sections. Cardoons are little known in the UK, which is a pity – they are delicious. Here is a typical recipe:

1-2 kilos of cardoons, stringy bits stripped off, cut into pieces 3 inches(5-7 cms)long.
Juice of half a lemon
1 tsp of salt

For the sauce:
20g of butter
250ml of double cream
500ml of cardoon cooking water or vegetable stock
A little nutmeg or mace
Salt and Pepper

To top:
300g of cheese, grated (use an alpine cheese such as Comté, Beaufort or Gruyere or, failing that, Cheddar)

If you are lucky enough to get a fresh cardoon plant, treat it a bit like rhubarb, removing the stringy bits, chopping it up then place it covered with water in a large saucepan acidulated with half a squeezed lemon and a teaspoon of salt. This prevents it from going brown. Once prepped, bring to the boil and simmer on a medium to low heat until the cardoon is soft enough to prick with a fork easily, about an hour. Cardoons taste rather bitter until they are cooked.
Drain but reserve the cardoon water. Preheat the oven to 180ºc. Butter a baking dish 20cm x 10cm approximately.
In the meantime, make the sauce.
In a medium sized saucepan on a low heat, melt the butter. Immediately stir in the cream. You can then add the cardoon water or vegetable stock or a mix of both. Keep stirring the sauce for about ten minutes until it thickens, then add the nutmeg or mace. Taste then season with salt and pepper.
Lay the cardoons in the baking dish in a single layer then cover with the bechamel sauce.
Add the grated cheese (if you prefer it low fat, add breadcrumbs instead) and bake for 20 minutes. Another option, which a commenter on my Instagram mentioned, is adding roasted slivered almonds. Drool!