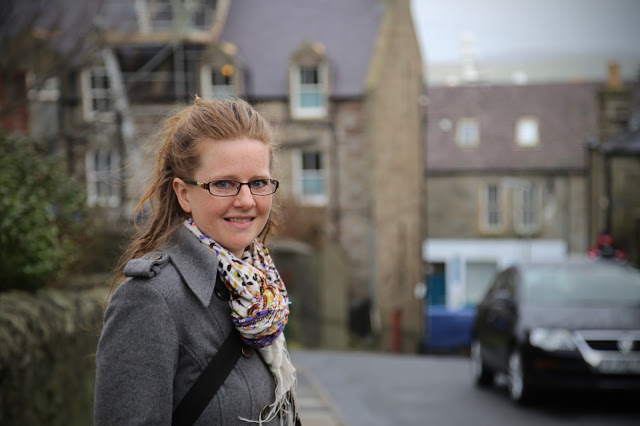 When I travel, I try to make contact with local food and drink bloggers – after all, they know their patch best. I like getting to meet them, hang out with them, hear their stories, how they live, what they think of their country and their home.
In Shetland, I spent a few days with Britain’s most northerly food blogger, Elizabeth Atia, who writes Elizabeth’s Kitchen Diary. A pretty redhead originally from Canada, she’s lived in Shetland for 17 years and has three children. She came to Scotland after being inspired by the film ‘Rob Roy’ to get back to her Scottish MacIntosh roots. She began by applying to every health food store in Scotland including a shop whose owner had an unusual method of selecting employees – dowsing with a pendulum. Fortunately, the pendulum swung Elizabeth’s way and she was hired.
This was obviously fated as within weeks she had met her first husband. After having a son, they split a few years later. Then came three years alone as a single parent. Elizabeth met her second husband online, who at the time was living in Birmingham. He took the risk of journeying to Shetland to meet her face to face, forking out for a flight and booking a bed and breakfast for a week.

She explained: ‘He was gorgeous and importantly I knew he worked for the Post Office and that they do a criminal record check, something a single mum must consider’.

All of us who’ve done online dating know how rarely that happens; you can fall in love with someone online but within 30 seconds of meeting them in person you know if you ever want to see them again. Things clicked and love bloomed. They recently got married (after two kids) with a stylish ‘steam punk’ ceremony complete with home-made bridesmaid/groom outfits and a charity shop wedding dress. If you are creative, you don’t need much money.
Coming from a small village, Cape Breton near Halifax where ‘there were maybe 200 people’ makes her an ideal candidate for living in Shetland, which has a total population of 22k. Everywhere we walked, she knew people. And true to most small communities, everybody knows everything.
As well as food blogging and writing freelance for magazines such as Shetland’s 60 North, Elizabeth does crafting projects such as this incredible hand painted Fair Isle stair renovation. She’s also graduated with first class honours doing an Open University degree in Life Sciences.

‘A couple of years ago I put on two stone because of an injury,’ she explained ‘I was volunteering for crewing on a RNLI lifeboat (Royal National Lifeboat Institution) and a rope got caught around my ankle’.

She could have lost her foot- every sailor knows how dangerous this is. Elizabeth was taken to the local hospital (Gilbert Baine Hospital, which they all call GBH) and was laid up for weeks. She used the P90X programme to get back to health. Now she maintains fitness with her Fitbit, doing at least 10k steps a day and more often 20 to 30k. In fact within a few minutes of meeting her, she insisted on doing a lengthy walk around the bay to visit Clickimin broch, an Iron Age stone watch-tower. She bounded up hills and shook off sea spray, red dreadlocks flying behind her, pirate coat billowing in the wind, while I trailed, puffing. (I need more friends that force me to do stuff like this.) 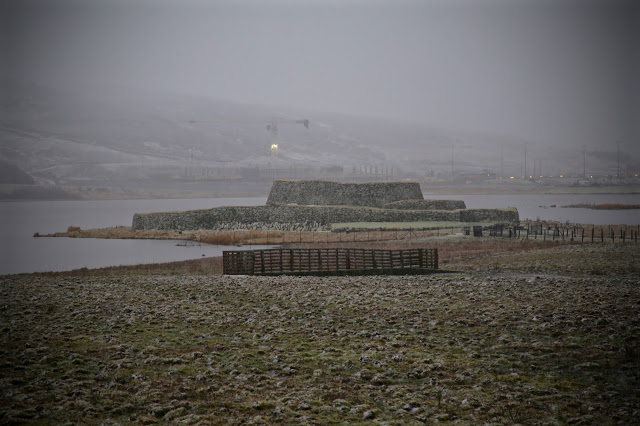 Elizabeth has more limited ingredients to work with than bloggers on the UK mainland. Even the large supermarkets such as Tesco in Lerwick tend not to have much in, especially after recent storms Gertrude and Henry when customers panic-buy biscuits and booze. She also uses her local village cooperative.

‘When I cook, I don’t decide what I want to cook and buy the ingredients, I go to the shop and see what they have and construct something around that. Once I went to the local shop and all they had was a pig’s foot.’

She has to be resourceful. Is it frustrating sometimes?

‘Come midwinter, around the 21st of December, it can be so hard, mentally hard. But then again in summer we are out kayaking after midnight. You learn to take advantage of the fine weather when it comes, to pick up and go.’

Fresh herbs, for instance, in winter are a luxury. ‘Parsley in winter? I’d have to freeze them from summer. ‘

Things we take for granted elsewhere are difficult to obtain out of season. Elizabeth gets an organic vegetable box throughout the summer and tucks vegetables away in her freezer to use in winter. Yet Shetland is so far north – nearer Norway than Scotland – that rather like Alaska, they have a short but intense summer, known as the ‘simmer dim’ where there is almost 24 hour daylight. Conversely, the winter months have little daylight, a brief window between around 9 am and 2pm, which is ‘a nightmare for shooting food pix’.

Living in such a remote location means that, for a blogger, deliveries of samples are complicated: only non-perishable items can be sent. A hamper of Bulgarian food samples was sent and arrived several weeks after the use-by date. Other problems include not being able to go on travel trips like other bloggers. Companies are reluctant to spend the money when it costs several hundred pounds just to get off the island. Last year Elizabeth and her husband took all three children to England for a holiday, it cost over £3,000. But her children were thrilled to see trees for the first time.

‘They were just amazed. Shetland has the odd sparse group of trees but they aren’t very big. My son was scared when I took him to Canada to see the redwood forests at the age of four.

He was frightened of bears. There are no predators in Shetland; no foxes or snakes, only pole cats (wild ferrets) and lots of rabbits.’

Five thousand years ago, most of Shetland’s trees were felled by the Picts, creating the ubiquitous peat. Furthermore the saline air (no part of Shetland is further than three miles from the sea), the extreme weather and the sheep, mean that new ones have not been able to grow. I experienced 147mph gales during Storm Gertrude, which was really quite frightening, I could barely drive my car which was rocking back and forth.

‘It has been described as a council estate in the North Sea’ Elizabeth explained in her Shetland burr which had only traces of Canadian ‘It’s slow paced. I suppose I’m used to that coming from where I lived. There isn’t much distraction. On the mainland there is cinema and theatre. When you’ve got that thinking time, you get inspired, you are creative. You’ve seen the landscape, it’s never the same, it keeps changing. Who knew there were so many different shades of brown, burnt umbers, oranges, browns, green? Then you’ve got the sea, the big sky, so big and always changing. I’m a wildling. And everybody is so friendly, so helpful. Folk don’t ask for anything in return.’

What is the most surprising aspect of living in Shetland?

‘There is a lot to do. Clubs, fencing, ballroom dancing, yoga. People keep themselves entertained. Bands come up to Shetland, for instance for the folk festival in May. ‘

What gives you the most pleasure here?

‘Being outdoors, the freedom. You can walk for miles and miles and not see a single soul.’

Have you ever felt lonely?

Elizabeth hesitates. ‘During the winter. I have no extended family here. But I was raised to be resilient and self sufficient.’

Will you be staying?

‘Sometimes I get homesick for Canada. But I’ve only been a grown up here. I don’t know if I could be a grown up in Canada.’

FIVE PLACES TO EAT IN SHETLAND recommended by Elizabeth

Fjara Cafe Bar – situated on the Lerwick waterfront this cafe serves gorgeous sharing platters, indulgent desserts and quality coffees all while offering superb sea views. You might even get to watch the seals basking on the rocks nearby.

The Scalloway Hotel – Shetland’s only rosette winning restaurant located in the old capital of Shetland. Fine Shetland dining at its best – quality fresh, local seafood and a mouth watering menu.

Burrastow House – a wild intimate retreat on the remote west side of Shetland. The menu served is whatever the chef fancies cooking on the day using local produce. Reopens in the Spring. 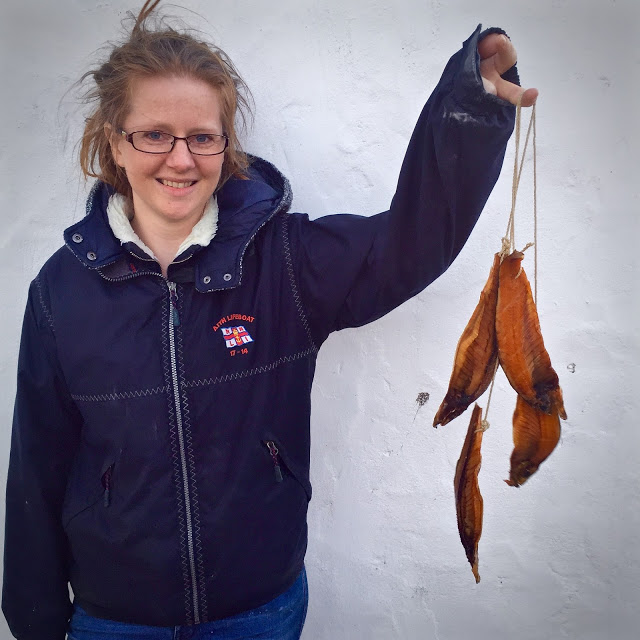