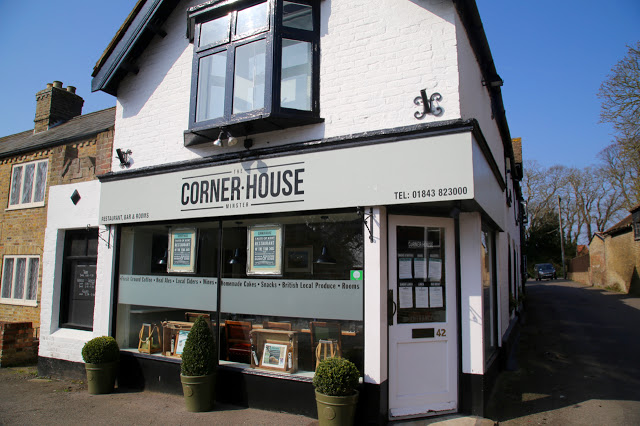 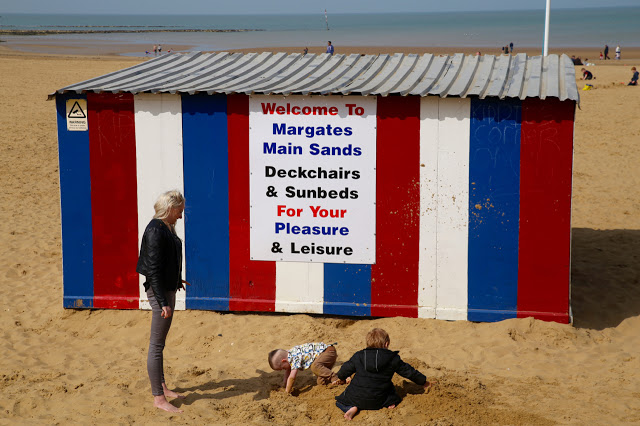 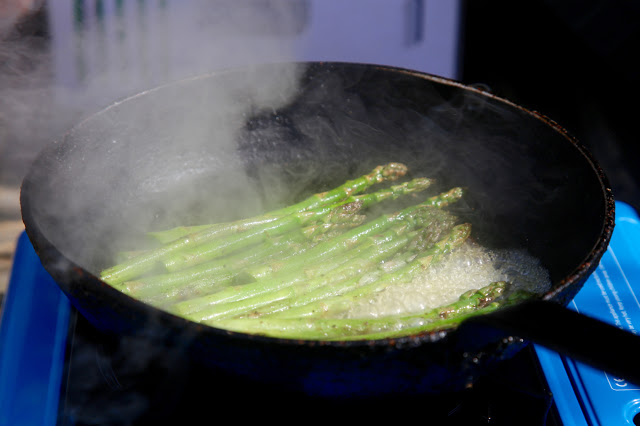 I get an email:

‘Would you like to come down to see the asparagus farm in Kent on April Fools’ Day?’
‘Yes please.’

Grabbing my tickets at Kings Cross St Pancras I ran, puffing for the train. You could only get on the first six carriages up the other end of the platform.
Once I’d settled in my seat, I realised I had no idea where to get off. I DM’d the PR. ‘You get off at Minster.’ Cool. I relaxed.
A few minutes later: ‘But you have to change at Ashford International’. I got this message one minute before we arrived at Ashford International.
I disembark and ask a train guard how I can get a train to Minster.

I wait. Sitting down. Minutes pass. I start to wonder why the train hasn’t arrived.

I’m seriously doubting my own sanity. A train arrived in front of me and somehow I didn’t notice.
The next one is an hour away. Or you can get on a train to Canterbury. By now I’m sending hysterical tweets to the PR:

I get on the train to Canterbury.

By now I’m stressed, tired. I’m losing it, I think.
Eventually I get to The Corner House restaurant in Minster, where I’ve missed lunch.
We drive to farmer Matthew Spanton’s farm, and he shows us the sorting house where the asparagus is washed, sorted, snipped, measured, sorted for size, grade and crookedness. If it’s too bent supermarkets won’t take it. The machine is impressive but there are no asparagus on the conveyor belt. 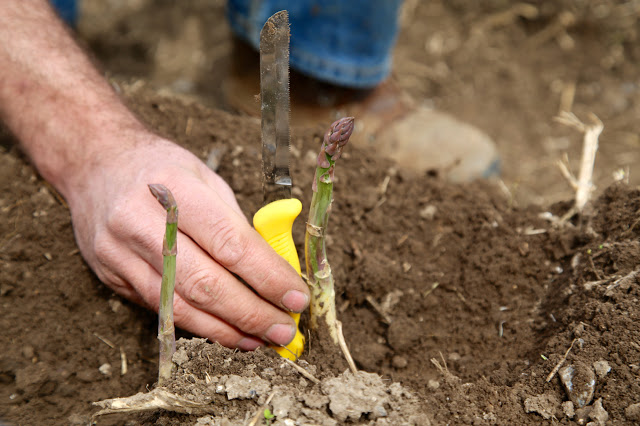 We then walk to the middle of a field where the farmer uncovers a mound and points to three barely discernible shoots.

‘I’m afraid it’s been cold the last couple of days and the asparagus isn’t ready.’

We gaze at the shoots. I take pictures. The farmer holds a knife next to the asparagus:

‘When the asparagus reaches to the top of the knife, we can pick it.’

Chef Matt Sworder of The Corner House takes a small bunch of asparagus from the farmer who apologises, ‘that’s all I had’, and sets up a mini-kitchen on the back of a truck, including a camping gas hob, some rapeseed oil, some green hop beer, butter and a little salt. He cooks asparagus like I do, griddling with a little oil or butter and then adding some liquid to steam it. 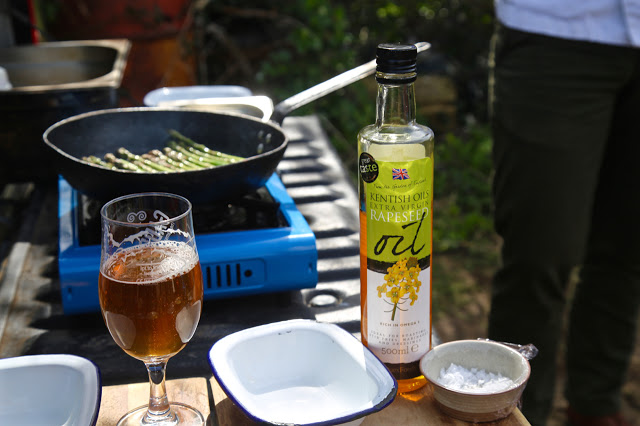 Although the market for asparagus is growing, still people are afraid to cook it. They think you need special pans. Often they over-boil it and are disappointed. As asparagus is not that cheap, this failure puts them off.
Green asparagus is exactly the same as white asparagus, which the Austrians and Germans are obsessed with. White asparagus has been forced underground, deprived of the sunlight and chlorophyll that will make it green. It has perhaps a slightly milder taste.
Matt gives us a precious spear each, which we dip into mayonnaise. It is delicious. Nothing like eating produce next to the field that it was grown in.
Next we drive to a rapeseed oil farm, Kentish Oils. I’ve visited a rapeseed farm previously. It’s Britain’s olive oil. We are shown the processing machine, the seeds and the ‘cake’ which is what is left after the oil is pressed out. The cake is sold as animal feed. I taste some, it’s pretty good. I start to think about the seed. How come one never sees rapeseeds for sale? You know, like poppy seeds or sunflower seeds or hemp or linseed? I grab a handful and eat them. Not bad. Not great but there’s probably tons of vitamins in them. 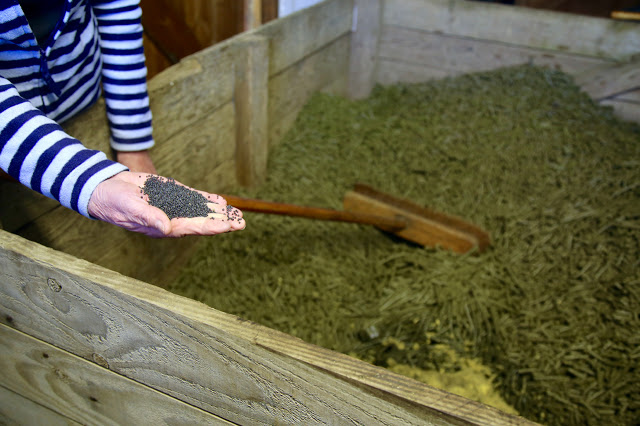 We have a go at bottling our own oil then do a tasting of different rapeseed oils. The lemon flavoured one is particularly good. Then I feel my stomach cramp. The toilet is right next to the tasting room. I sit on the loo and I can hear the people doing their tasting. Me I’ve got the shits all of a sudden. Plop plop plop. The noise resounds. I’m sure they can hear me. I turn the tap on to try and disguise it. They probably think I pee like an elephant. After an unfeasibly long period in the toilet, I emerge back into the tasting room. I’m not completely ready but it’s all getting embarrassing. But nobody says anything. This is Britain after all.
We get back into the van and my stomach starts to seize up. We are driving along Kentish lanes.

‘How long will it take to get to the next place?’ I squirm.

‘About fifteen minutes,’ the driver replies.

I throw dignity to the wind and squeak: ‘I hope I can keep it in until then.’

‘I can stop next to a field,’ offers the driver.

‘I’ve left my phone back at the rapeseed oil place,’ gasps another. We have to turn back.

I google rapeseed on my phone. It’s highly toxic.
I’ve taken to praying to the god of poo. It works, my stomach calms itself.
Our next stop is the Ramsgate Brewery run by a droll fellow called Eddie Gadd who used to be an engineer and helped dig the Channel tunnel.

He says: ‘I’m going to tell you how to brew beer.’ 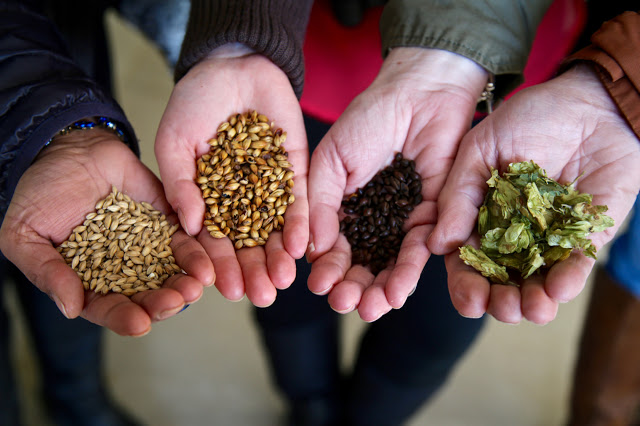 Kent is famous for hops ‘East Kent Goldings’ which is a Protected Designation of Origin (PDO). But hops are fairly recent in the history of beer, an innovation brought over from Holland 500 years ago. They add bitterness and  shelflife: preserving the beer beyond a few days. Now beer lasted a matter of weeks rather than days. This is when production grew larger and men took over brewing as a profession. Prior to that, making beer was a woman’s job (wasn’t everything?). Women would place a broomstick sticking out from their door to signify ‘fresh beer for sale’. Hence the expression ‘small beer’. We still see this tradition in pub signs hanging perpendicularly from the outside. 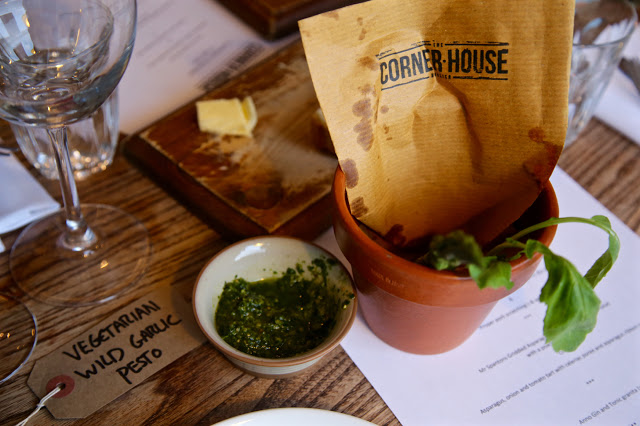 That evening I eat a fine local meal at the Corner House, which uses, where possible, Kent produce. We have Kentish beer, Kentish wine, asparagus, flavoured rapeseed oil, cheeses from Kent. I spend a comfortable night in the B & B upstairs. 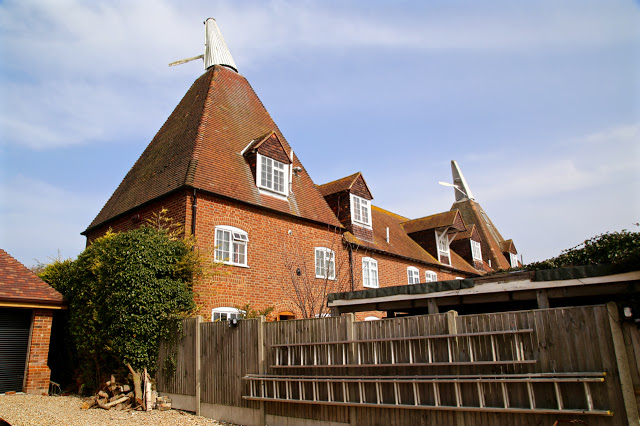 Even Kent’s architecture is influenced by beer, with occasional Oast houses, where hops were dried, still to be seen. I spoke to one woman who lives in an Oast house dating from the 1840s, converted to a house in the 1970s.

‘When it’s windy the cowl at the top of the chimney spins around’, she told me, ‘and it sounds like a ghost lives here.’

Thanet in Kent, the garden of England, is an island. There is a river that surrounds it, which has been silted up. Before you had to ask the boatman to take you across. I walk around the village of Minster, the ‘capital’ of the island of Thanet, with the owner of The Corner House restaurant. It’s the kind of picture-perfect English village where everyone knows everyone. He says hello to virtually everybody we come across. 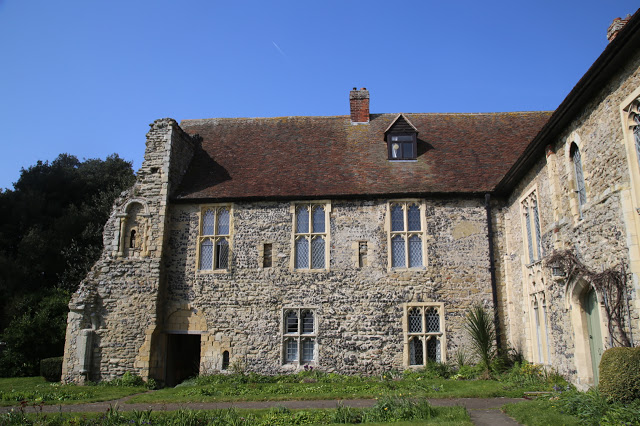 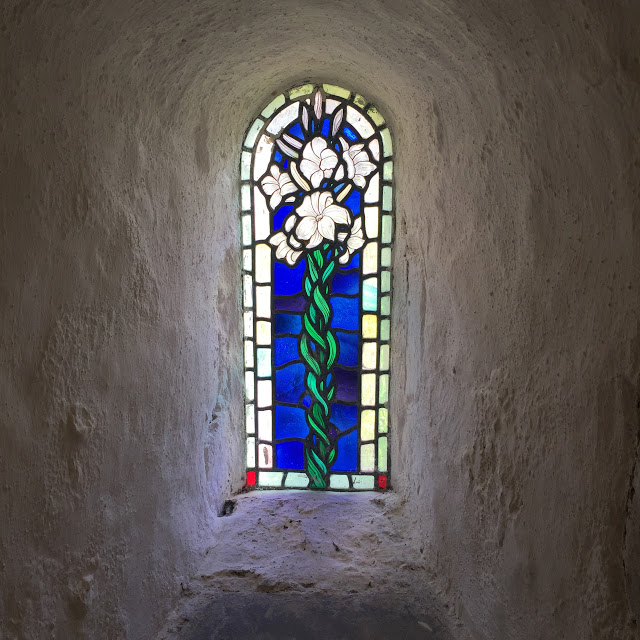 We visit Minster Abbey, which is a rare Pre-Conquest building with Norman additions. The herring-bone style of brickwork is Saxon, and the original window slits, without glass, gave air and light. A Benedictine order of nuns live there. There are still about 20 orders of nuns in the UK. In English we tend to say ‘nunnery’ but actually monastery is technically accurate. It means an enclosed community, where the community comes in rather than the sister going out. So hospitality is important and you can still stay with the sisters, using the abbey as a retreat. The abbess Domneva was the original founder of this religious order, and was given Thanet as blood money by the Saxon King Ethelbert of Kent. Her daughter, St Mildred, was the second abbess. 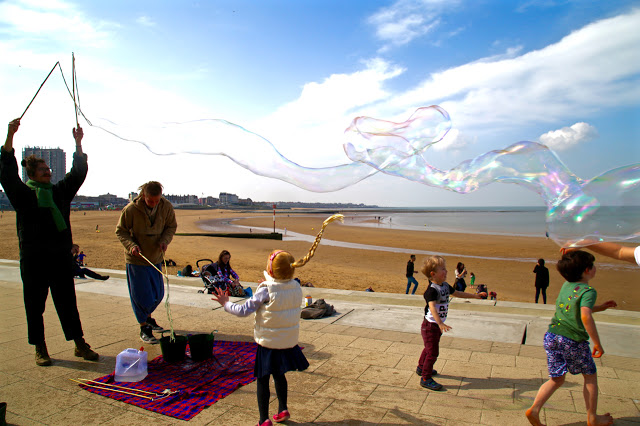 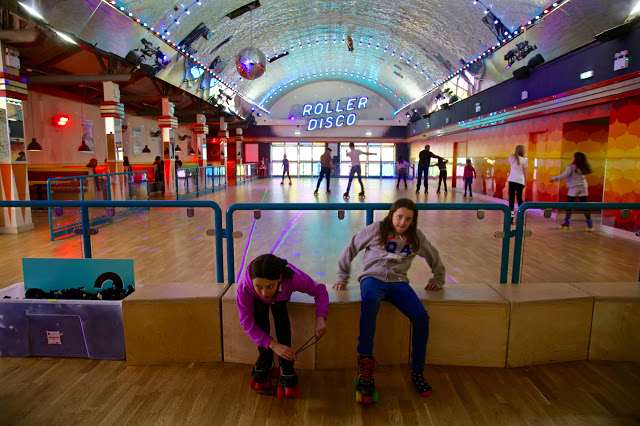 We drove to Margate and visited Dreamland, a retro seaside funfair with old fashioned rides. Margate is now a thriving and fashionable resort, with vintage shops selling fashion and furniture. The Sands hotel has been updated, you can eat on the balcony overlooking the sea front. 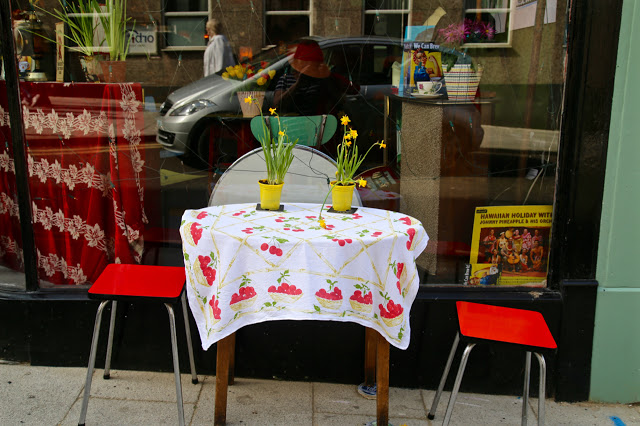 The most thrilling part of my trip was visiting the Turner Contemporary gallery, named of course, after the artist, who frequently painted in Margate. The exterior was poorly designed, looking like a modern warehouse blocking a view of the sea but inside it was light and lovely. There was a stunning exhibion by Yinka Shonibari of Dutch batik wrapped books with the names of public figures printed in gold on the spine. A must-see. 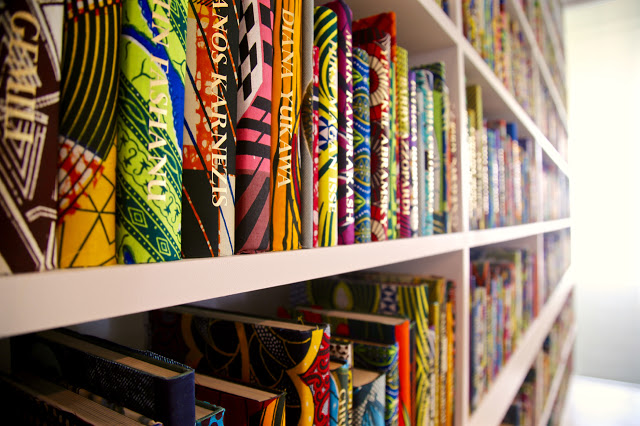