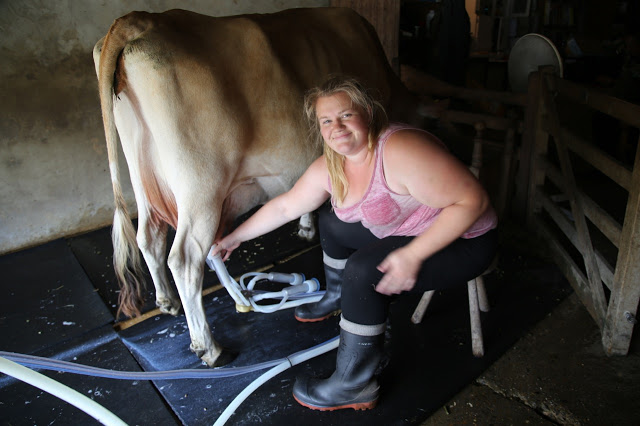 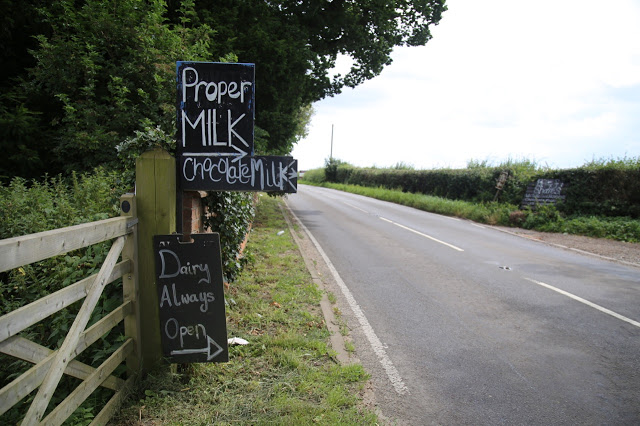 “I fucking hate men. Male farmers resent female farmers – they want to control you. My dad always said ‘you can’t farm, there’s no money in it’. But I don’t do it for the money. I do it so I can sleep at night.

If women were still the farmers, farming would be different. You don’t have to push animals so hard. There wouldn’t be any of this industrialisation; the cruelty, the chemicals. When I go to a supermarket, that’s what I see: aisles full of chemicals.”

The fierce and passionate Fiona Provan, owner of The Calf at Foot Dairy on the Suffolk/Norfolk border on the Somerleyton Estate, is trying to change dairy farming. I interviewed her after a visit to her ‘parlour’, a large airy wooden barn with chandeliers, sofas and book shelves. In a sunlit corner, one of her ‘dairy angels’, Amy, milked a cow whose tail lashed her softly in the face. Amy looks like a milk maid from a children’s story book, all blonde hair, perfect creamy skin and laughing blue eyes.

Fiona continues: “My father was a vet, he was a very hard man. I was born in the ’60s. I saw the way farming was going, how industrialisation became popular with farmers. My father worked very hard; 24/7, he was under pressure. The strain of running his own business made him lose his temper. In those days the drugs he gave to animals were dispensed from large glass bottles, he’d mix them up himself. He got allergies.

I was brought up in Hertfordshire but 15 years ago I moved to the Suffolk/Norfolk border. I was desperate to set up a farm. I hated school. I wanted to be outside with the cows. The neighbours were dairy farmers. My best memories of childhood were from there. I was a naughty girl at school, always in trouble.

At 16 I left school and started as a stockman on a dairy farm. Women always make the best stockmen. They have the eye. When humans first started farming it was the women that did it, the men were out hunting.

At 22 I got married and I was given a house cow by my father, a Jersey cow. For a while I was very depressed. I was campaigning for animal rights but it wasn’t enough. When I became a mother myself I decided that I must start an ethical dairy. I couldn’t drink milk until I did that.

You know most people don’t know that cow milk is mother’s milk. I had a human mother in here with a babe in arms. She was shocked when she realised that commercial milk is a result of taking calves away from their mothers.

At last people are beginning to care. My aim before I die is to create a movement. I want other people to start ethical dairies. I want competition.

It’s difficult being a female farmer. My kids are in their late 20s now. I’ve been alone for 8 years. People are hostile, I get abuse, I’ve had my tyres slashed.

It’s been difficult, I’ve had to move farms often. I have no grass. I need more grass for the cows to feed on. I need more funding, and I might start a crowd funder. My girls help me, my ‘dairy angels’. I can’t afford to employ people so they are volunteers. These girls come from towns and flats in cities, I’ve had them milking cows, injecting sperm within a week.”

The Calf at Foot Dairy has around thirty cows, which are either Jersey, Red Polls or a combination. Apparently cows cost around £500 each. Here, each cow has a name – Lily, Thistle, Dottie, Tess, Bluebell – and a strong personality. “Some cows are silly. Others are motherly,” it is explained. “They are very intelligent.”

As a chef and food writer, I’ve been interested by raw milk for a while. It boasts many of the same benefits as human breast milk, and is also put on cuts and burns to promote healing. I’ve tried donkey milk, which is naturally very sweet; mares’ milk, again sweeter than cow; goats’ and sheep’s milk; and, when I journeyed through Tibet, I ate yak’s milk products. I also drink soy milk (apparently good for the menopause) and nut milk.

The United Kingdom has a huge per capita consumption of cow’s milk, third behind Ireland and Finland. I was surprised by this as in both the US and Scandinavia grown ups drink glasses of milk with their food. But this is probably down to the milk in our tea. (The French, of course, eat more cheese and butter than any other country.) But I know little about farming, so I put more questions to Fiona.

Tell me about industrial dairy farming.
Calves are separated from their mothers. I never do that. They drink from buckets. I would never allow that.

Why?
Calves must drink milk with their chin tipped up, otherwise they don’t get the nutrition. They can drink water with their chin down.
(In normal dairies) calves weren’t allowed to suck. They suck on anything they can, so they get abcesses and sores.
The calves stay on for 5 months – by that I mean they stay with mum. Then the weaners are sold on. The mum is still grieving.
At The Calf At Foot Dairy, the calves stay on for a minimum of 9 months, up to 12 months.
Each cow and calf is judged on its own merit. We use our intuition and instincts as to when the calf should wean.

Is it like human babies? They start to want solids?
Calves start to eat grass at 2 weeks old.  It’s more that mum gets run down, I call it ‘melting’. She loses energy, looks a bit droopy.

How do you have enough milk to sell to the public?
In the first couple of months there is plenty of milk, in fact they have enough milk for four calves. Usually they only have one calf, sometimes, rarely, twins. At five months I might separate the calf and cow overnight to give mum a rest.
Two or three months later I start to turn them away.

What do you mean?
They come to get milked and I turn them away.

Do they like being milked? Just like human mothers like breast feeding?
Yes. Being milked is a relief for them. They get that surge of oxytocin, that lovely dreamy feeling.

Do you milk by hand?
No, we have a milking machine. They come to the parlour – that’s what we call the milking bit of the barn.
Right now in August, it’s tricky to milk the cows: there are the biting flies, it’s very uncomfortable for them and for the milkers.

On food and the environment:
I don’t push for the local thing, I believe in sourcing the best suppliers. You can buy online now so this isn’t too difficult.
I don’t believe in a vegan diet either, I think it will completely destroy diversity. It relies on monocultures like soy, of which virtually all of it is GM. We’ve got a 100 years of topsoil left, you know. That’s it. Animals grazing is vital for diversity and for the soil. Militant vegans from the US have trashed my FB page with vile, threatening comments.

On health benefits:
Raw milk is also good for vaginal atrophy and thrush. Just inject it in, it’ll sort it. You can drink it too, that helps, but really I don’t give a toss about human health.

On ethical dairies:
I spoke a couple of years ago at the Real Farming Conference in Oxford. Now it’s bigger than the official farming conference.
The only other ethical dairy like mine is Belvoir Ridge (pronounced Beaver) in Nottingham. They heard me at the conference. They took it up, haven’t looked back since.
Fen Farm and Hook and Son are both organic and raw dairies but not ethical like mine. That’s why my milk is expensive, the most expensive.

What is raw milk?
It’s unpasteurised, non-homogenised milk direct from the cow. It contains nutrients such as vitamin C, which is reduced by heat treatments. It is also referred to as ‘white blood’ because it contains living white blood cells.

In many countries it is illegal to sell raw milk: it is legal in England, but not in Scotland. The Calf At Foot Dairy therefore ship quite a bit of raw milk to Scotland.

Does raw milk taste better?
It has a fuller, fattier, more complex flavour. I’d say you can taste the farmyard in it. It is unprocessed and therefore more nutritious. It contains good cholesterol and higher cholesterol is now associated with a longer life.

Is raw milk dangerous?
Raw milk can contain dangerous bacteria such as e coli, salmonella, TB and listeria. But if it is obtained from a hygienic dairy farm, you should have no health problems. The ‘dangerous’ reputation of raw milk is rather outdated. It is now thought to be good for allergies such as eczema and hay fever.

“Lactose is milk sugar. If you drink the kind of untreated milk produced at The Calf at Foot Dairy, the lactose is broken down in your body by the enzyme lactase. In pasteurised milk, this enzyme is destroyed by the heat treatment. As a result, more and more people are finding themselves to be lactose intolerant simply as a result of not being able to break down this sugar.  With care in returning to a traditional, nutrient-dense diet which includes unadulterated raw milk, this intolerance can be reversed.”

Industrial dairies:
Cows in industrial dairies have their calves removed at an early age. The calves are fed milk replacers as all the milk meant for them is given to humans. The cows are forced into pregnancy and lactation at an early age (18 months rather than 2 years old). This is repeated quickly, forcing the pace rather than allowing the cows to get pregnant at a natural and healthy rhythm. Industrial cows rarely live past 5 years old, having suffered 3 ‘rotations’ (pregnancy and lactation) already. They are given antibiotics to prevent illness, which comes through into the milk.

Ethical dairies:
The cows keep their calves, feeding them for at least 9 months. The only milk that is taken is excess milk. They are untethered as they are being milked. The cows don’t get pregnant every year, only when they are ready. As a result, they are healthy and happy and live often until 12 years old. They are not culled once they have outlived milking. They are grass fed rather than grain fed. Grass feeding cows is better than water guzzling grain feed.

We should appreciate the milk given by animals – it is a precious resource, not to be taken lightly. At the moment milk is cheaper than bottled water. Food is too cheap in this country. 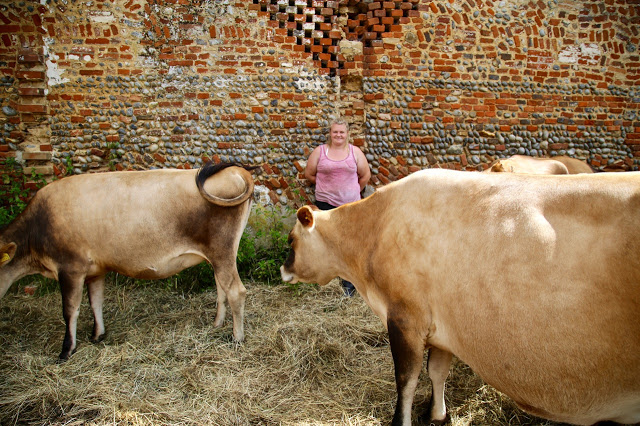 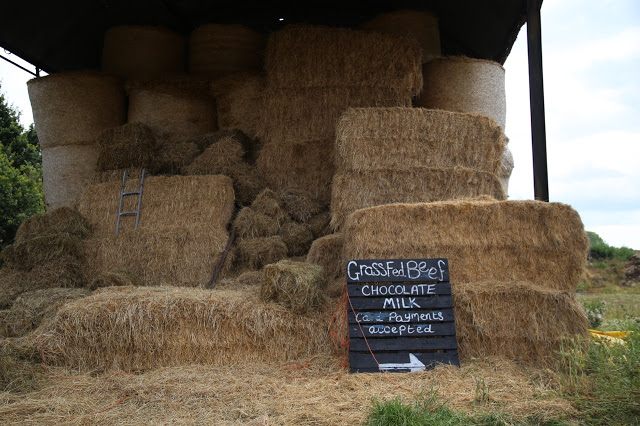 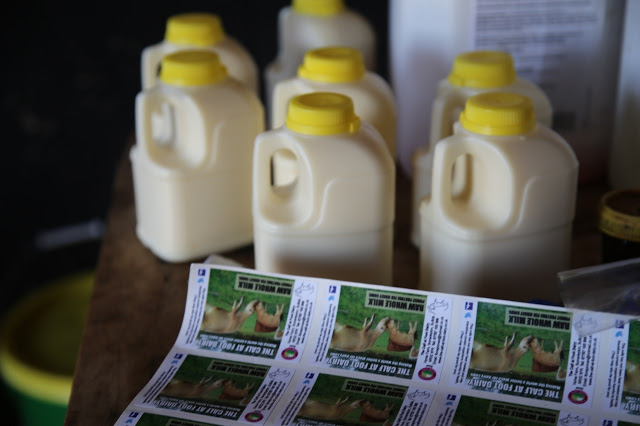 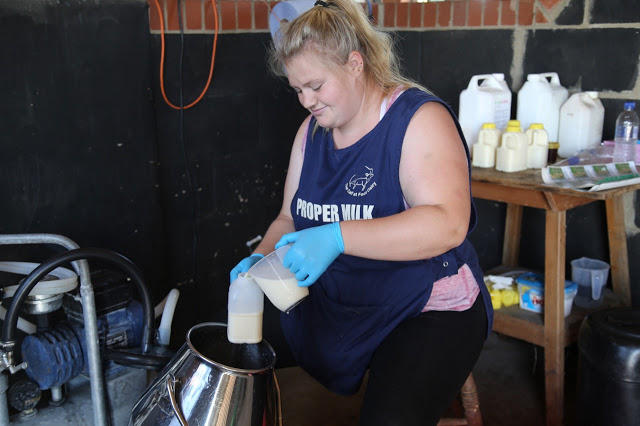