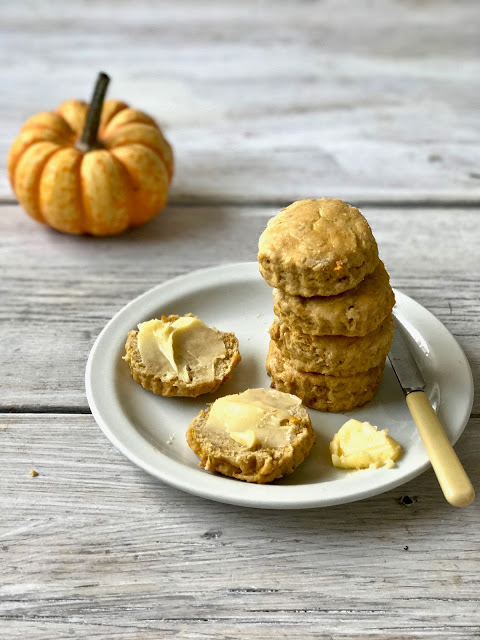 These aren’t your normal English biscuits, twice-cooked until crisp in an oven, rather, they are American style biscuits, something we’d call savoury scones (which don’t really exist). In the south, they have biscuits with gravy for breakfast which I think sounds vile. But then again I’m not a big fan of the whole crispy/soggy food combo thing; I’d never touch chips with curry sauce either.
But I ate American biscuits in New York at Dirt Candy: light, flaky, fudgey, sweet, a little sour, with yellow pepper jam and pumpkin butter which was brilliant. This is my version, tweaked from this recipe. You could also add cheese to the recipe which I would do next time. I paired this with a tomatillo chutney but pumpkin butter is a great idea. 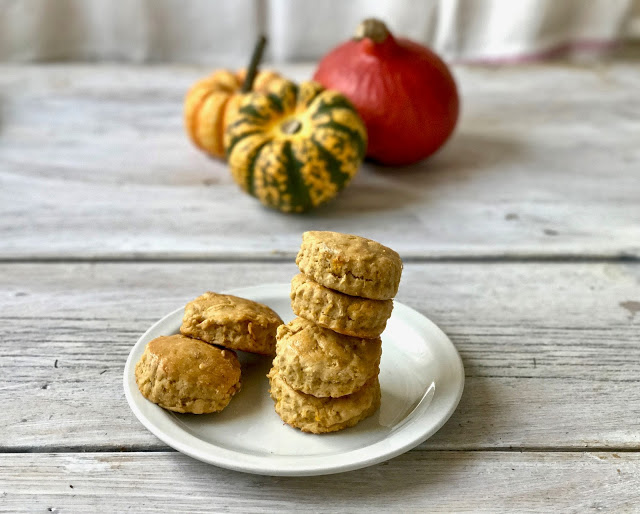 Preheat your oven to 220cº
Prepare your chosen squash by roasting it in a little olive oil in an oven at 220cº for 30 minutes or until soft when prodded with a skewer.
Combine the flour, bicarb, baking powder, sea salt, sugar and cinnamon. You can freeze the butter or use directly from the fridge, grating it into the dry ingredients and rubbing it together or pulsing it in the food processor. I used salted butter as I like salt but you can use unsalted butter if you like.
Add the buttermilk and the pumpkin, pull the mixture together for a few minutes without over-mixing.

Flour your clean work surface and press out your dough, folding it several times to get layers, then pat down until it is half an inch thick (1.5cms).
Using a round cutter dipped in flour, cut out as many circles as you can. Don’t twist the cutter, you want them to bake upright not bent. Gather the scraps and cut out some more until the dough is finished.
Place them on a baking tray covered with parchment paper or a silpat (touching or not touching – touching gives you ‘soft sides’, not touching gives you ‘crusty sides’).
Bake for 20 minutes or until golden.

More pumpkin recipes and what wine to drink with them in my column at winetrust100.