I’m re-acquainting myself with British history via TV series such as The Last Kingdom and Vikings. Both series feature the ninth century King Alfred, whose capital was in Winchester, in the former county of ‘Wessex’. Winchester is dominated by an enormous bronze statue of Alfred the Great, so called because he was the first monarch to unite England.

Winchester was firstly a Roman capital for centuries, then around the time of Alfred, the ninth century, became the capital of Wessex. Like Durham, the town boasts an impressive and historic cathedral, containing celebrity relics such as those of St Swithun, King Canute and Jane Austen.

St. Swithun, an Anglo-Saxon bishop, taught King Alfred. There is a memorial dedicated to him behind the main altar. The legend is that if it rains on the 15th of July, St Swithun’s day, it will rain for 40 days and nights.

Jane Austen only lived in Winchester for the two months before she died, having moved there to see a medical specialist. You can see the brass plaque on the wall and a small exhibition celebrating her writing.

King Canute invaded England in the 10th century, about 50 years before William the Conqueror. He was king of the North Sea Empire which covered Norway, Denmark and England. His bones rest in Winchester Cathedral.

One of the most strikingly beautiful things about the cathedral is the 13th century tiled floor – it’s the largest collection of encaustic tiles in the world.

Winchester has a bonny collection of timbered buildings, a cobbled pedestrianised high street and the first public school, which dates from before Eton.

The river Itchen runs through the town, under a refurbished working water mill, where flour is still milled. The water is particularly clean, the surrounding land containing chalk. This similarity of terroir to the Champagne region is one of the reasons that English sparkling wine is grown around Winchester and throughout Hampshire.

Where to eat and stay.

Kyoto Kitchen is a culinary jewel in the centre of Winchester: traditional Japanese food with some fusion dishes such as the ‘Winchester roll’, sushi wrapped in watercress, another local ingredient.

I stayed just outside Winchester, at the 17th century Lainston House, an enormous historic hotel with a cookery school ‘Season’ attached. The room I had was the size of a London flat, with beamed ceilings, complimentary chocolates, a large bathroom with roll top bath, a TV and underfloor heating.

Afternoon tea was held in an elegant blue room, drinks in the panelled bar with leather seats and an excellent tasting menu by chef Andrew Birch at The Avenue restaurant. In the morning I took a stroll in the grounds to see their menagerie of owls and the walled kitchen garden.

Winchester had a wine fair on the weekend I visited. I tasted local sparkling wines such as Raimes, Black Chalk (very good), Hattingley (who make a rare Demi-sec as well as the classic Brut), and Exton Park vineyard, the latter run by Corinne Seeker, who left France for Britain to join the nascent English sparkling wine industry.

Watercress and wasabi are also local ingredients from Winchester. My next post will describe my visit to the Wasabi farm. 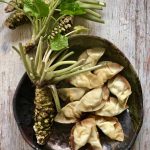 For the dipping sauce