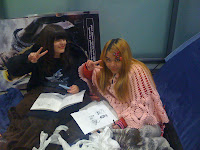 What a bloody awful film. I mean, they weren’t exactly wearing hair gel, à la U.S. import The Tudors but it wasn’t far off. Scarlett Johannsen looking somewhat as my teenager would say “butters” (butt ugly) and Natalie Portman overacting as Anne Boleyn. No one will surpass Dorothy Tutin in this role or her runner up, Genevieve Bujold.

The history was dodgy. I’ve read the book, which is not bad, but basically treats the accusations made against Anne Boleyn at her trial,such as incest and witchcraft, as true. Marie-Antoinette was accused of incest with her own son, the dauphin, so it’s a familiar charge when people become scapegoats. I get annoyed as Anne Boleyn is a childhood heroine of mine. She refused to have sex with Henry VIII for 3 years before she finally relented…to turn down a king, what courage!
Outside teenagers in tents…what? They’ve been camping for 24 hours in the street, in this snow, to see a Japanese rock group, or ‘J-rock’ as it’s apparently known. I listened to some and it’s a bit bubblegum for my taste. 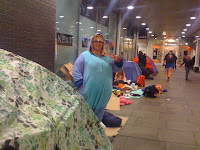 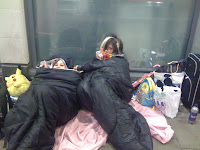