Spacehijackers are a group of activists and artists who seek to protest in a playful, original and creative way. They run the anarchic Circle line parties (with the notorious nude pole-dancing male, who I must admit, was my boyfriend at the time and I did love him all the more for it) of which I have attended one. The next is planned for 2009.
This year they intend to celebrate Mayday by reviving the infamous May Fayre in Mayfair, last seen in 1708, it being the 300th anniversary. Last night we held a meeting to discuss tactics and do a reconnaissance around Mayfair itself. Now I’m a Londoner, if not born then bred, but I never go to Mayfair, which is, along with Park Lane, the most expensive property on the Monopoly board. What a delight it is! It reminds me of Brassai photographs of old Paris night-life in the 1930’s: doorways glowing orange and pink with prostitutes signs on them, upstairs windows with red and violet lights, intimate candle-lit neighbourhood restaurants, Eastern men standing on street corners glinting gold, tiny unusual shops, a Mexican-Polish bistro (what is that food like then? beetroot nachos?), a hairdressers by appointment, a shop front advertising “champagne exercises’ by a woman in a leotard with a champagne bottle, (the mind boggles). It’s reminiscent also of Soho in the ’50’s. 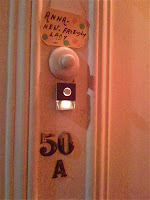 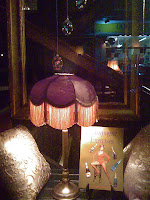 On our way to Mayfair, we saw a man being grabbed by two other men, who slammed his head hard against a tile wall and put handcuffs on him. The man was shouting “help, call the police”. I called the police as the two men wouldn’t show us ID to prove that they were policemen. Anyway we stood about waiting for the police to turn up. I’d lent Secret Agent Arcoiris my book on SM (SM101 by Jay Wiseman) as she needs it at the moment. Secret Agent Bristly started reading passages from this book aloud to the man and his captors, about dominance and submission. It did turn out that the ‘captors’ were genuine undercover policemen. 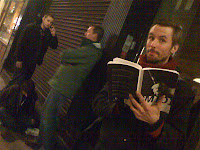 I’m not going to say too much about the planned event on May 1st but it involves lots of bawdy behaviour, cattle, Hanoverian clothing, music and snacks. Wear red underwear or become a Spacehijacker secret agent.