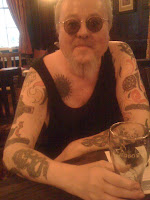 This OTO member is a former civil servant.
The moot with no name again organised by David Barrett, writer of Secret societies and former intelligence agent and hosted by Steve Wilson, of OTO (Ordo Templi Orientis). The talk ‘Assassins and the End of Time’ was given by Boz Temple-Morris, a sweet little bloke and the inventor of Death cigarettes, who were eventually closed down by order of British courts.
Nothing is true, everything is permitted.
The etymyology of the word assassin: it’s from hashshashin, that is “hashish user’, which is also old Arabic for ‘saint’. This was a term used by their enemies, because, like the incomprehension of Westerners today towards suicide bombers, their willingness to sacrifice themselves could only be understood if they were drugs’ users. In fact they were esoterrorists! However Assassins were not allowed to commit suicide, preferring to approach the enemy in disguise, kill them with a dagger and then be killed at the hands of the enemy once discovered.
The founder of The Assassins, a Shia Muslim sect established in the 11th century, was Hassan-i Sabbah. They were heretics from the established Muslim faith and lived in a series of mountain top fortresses in Eastern Iraq/Iran. They ran an almost autonomous nation state with their own laws and coinage. When armies were sent against them, they would take out the leaders, not fight the army. This was an effective technique for while generals are more than willing to sacrifice their troops, they are not so keen on being assassinated themselves. So they stopped coming. This was at the time of the crusades and foreign correspondents were reporting on it. It was rumoured that Richard the Lionheart hired the Assassins to kill the King of Jerusalem. The Assassins were more interested in defeating rival Muslim factions than the Christians.
Robert Anton Wilson was a big fan of these outlaw mystics. They also influenced the Ayatollah Khomeini who was a devotee and head of a secret society.
There were 3 schisms in Islam that led up to this:
1) The split between the Shia’s and the Sunni’s. Basically it was Iran versus the Arabs. Shia equals the state of Egypt
2)The second schism takes place when the Imam Jafar al Sadeq’s eldest son Ismail (a man with mystic and esoteric leanings) dies before his father and the succession is wrestled away from his bloodline by his more conservative brother. The followers of Ismail break away to form a new Shia group, the Ismaili’s. They later emerge at the head of an army and take Egypt, establishing the Fatimid Caliphate. Hasan i Sabah would have been preaching the Ismaili message in Iran and he takes the fortress of Alamut as centre of his operations.
3)The third schism was effectively a coup d’etat that happened within the Fatimid Caliphate. Nizar, son of the Imam, was murdered and his young brother took power. Hasan i Sabah, already in Iran, then broke away and called his group the “Nizari Ismaili’s”. It is the Nizari Ismaili’s that we call the Assasssins.
Hassan II, at the age of 35, in 1164 declared the End of Time, the abrogation of all law. During Ramadan, the min bar was pointed away from Mecca (the equivalent to an upside down cross) and there was a table filled with food and wine. (1) At noon, Hassan mounted a pulpit and announced:”Djinn, men, angels! I have received information that all law is dissolved, all form is inverted.” He has decided that his people are ready for true mystical power: 7 cycles of time and time itself is being subverted here. There is a Kabbalistic cascade:
God
^
Matter
The community are being invited to travel up this path.The laws are being dispensed with.
The campaign of assassination kicks off. Sleepers, who would work undercover as close aides for years, would assassinate or leave warnings; such a leader would wake up and find a dagger under their pillow (the implication being that it is harder to place it under a pillow than to kill someone). There were many prominent victims. One story says that in an attempt to kill Saladin, a poisoned cake was placed upon his chest while sleeping, with a dagger in it reading, “You are in our power.” Saladin, furious, tried to lay siege to the assassin Syrian stronghold Masyaf. The siege didn’t work because there was water (wells) inside the fortress. Eventually Saladin fled.
Even now, Al-Quaida have training handbooks explaining how to behave ‘normally’ in Western society, in enemy territory.(2)
All this was very similar to what happened to the Cathars in France. In the medieval times there were millennium movements. Frederic II declared “last days” “we are realised mystics”.
The Assassin culture was the earlier equivalent to the European renaissance. They worked with Aristotle and Plato. Within The Assassins there was Anarchy but no misbehaviour. People understood it. The Library at the Fortress of Alamat- was astonishing. The Fatimid Caliphate was a centre of learning. Kabbalist thought was exported wholesale into Spain…mystical Kabbalah really came from there. Ismailism was trying to encourage insurrection. .
Then 1256, the assassin state falls, the Mongols destroyed Alamat. Orthodoxy establishes itself within The Assassins. The Ismaeli’s diluted the entire Assassin culture and tamed the theology by claiming that Hassan was the Imam himself and part of the bloodline.
12 years previously the Cathars fell at Montségur.
(1) Speaking of sacrilege, in 930 CE, the ka’aba, the black stone was stolen by Ismaili warriors who had pillaged Makkah (Mecca). The stone broke apart into several pieces. Silver nails were used to fasten the broken pieces to the stone. The Ismailis held Ka’aba for 22 years (until 952 CE) then sold it back to Arabs. As an antinomian event it was a success.

(2) Perhaps this is what the 9/11 suicide bombers were doing when they caroused with topless waitresses in Florida cocktail bars prior to their mission.