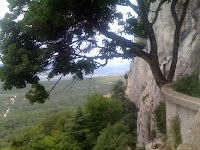 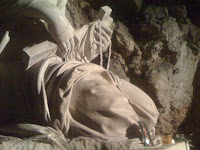 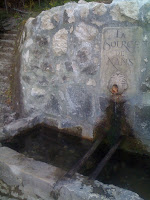 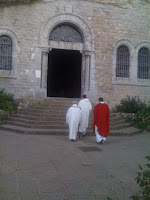 First stop after Saint Tropez was La Sainte-Baume. I have been before to St. Maximim, where I happened to arrive on the one day a year when the gold plated skull of Mary Magdalene is displayed at the cathedral. I was told that the grotto where she spent the last 30 years of her life was “up the road…nearby”. On this visit I decided to find the grotto. French paysan casualness of directions never fails to amaze me. The grotto was a 45 minute drive through beautiful windy pine forests towards the coast. At La Sainte-Baume there is a reasonably priced hotel run by Dominican monks. I was directed upwards towards the grotto…a 45 minute walk. We passed, yes I was accompanied by a groaning teenager, a ‘source’ of holy water, no doubt where the Magdalene herself drank during her period of isolation there. Crosses and notices stating that it was a place of silence dotted the path. At the top, a chapel carved out of the white rocky mountain side, we arrived in time for mass. Two priests in white and a cardinal in red stood at the door of the church as the bells tolled, echoing over the landscape far below. It reminded me of Tibetan hillside monasteries.

Inside, three Indian nuns clad in cream and white knelt at the pews. This shrine was an important place of pilgrimage until the middle ages. Every French king visited, some on their way to the crusades. There are plaques on the wall thanking Mary Magdalene and some declare that they have been healed at this site. During the French revolution, the shrine was partially destroyed and it fell into disuse. It was revived about a century ago.