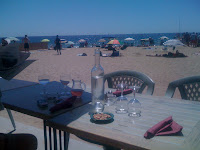 I spent the year 2005-6 living in Provence. I think, somewhere in the back of their minds, everyone has a dream of living in the South of France…
I came here because I was determined not to put my 11 year old into the local ‘sink comprehensive’(1). I was even prepared to move country. Moving to Grimaud, I enrolled her in the nearest French comprehensive in St.Maxime. In France everybody puts their kids into the local school. Private school costs peanuts, around a £100 a month, and is chosen for religious reasons, as they do not teach any religion in French State schools (separation between church and state very important here). Unlike Britain, particularly London, where the sole topic of conversation between parents of 8 to 11 year olds centres on what secondary school you are trying to get your kid into, France has a comprehensive system that works. This means: lots of lovely well brought up children; good teachers; good facilities; school bus.
School lunches however, were a bit of a problem. I had it in my head that all the kids would sit down to tiny pîchets of red wine with lunch, hors d’oeuvres, plats principals, cheese course, dessert and mini expresso coffees. With the exception of the wine and the expresso, my fantasy was fairly accurate: how many English schools serve goats cheese and crackers with lunch?

Trouble is my teenager is a vegetarian, always has been. She was coming home starving. They mix everything with meat, she complained.
So I stomped up the school and met the hefty cook. She came into the school office wiping her hands on her apron, ready to do battle. Sweetly I asked if she could put aside some of the pasta or the rice but without meat so that my teenager gets something to eat.

“We don’t do all that religious stuff here” she declared “just like we don’t allow veils or crucifixes“.

In France, vegetarianism is a kooky religion.
The mothers outside the school gate, being near to Saint Tropez, looked like film stars. High heels, coiffed hair, full make-up (brown lip-liner a particular fave), colour co-ordinated outfits were par for the course. So unlike our own dear England where most of us mums rock up bleary eyed, in trackie bottoms and hair (Croydon facelift style) in a scrunchie.
Kids don’t wear school uniform in France. The girls wore the latest fashions, jewellery, make-up, heels, tiny skirts over long brown legs. Plus there were school yard fashions. My teenager soon learnt that to wear your backpack high up your back was the ultimate nerdy thing to do. You had to wear the back pack with the straps so long it is hanging down by the backs of your knees. Thereby removing any advantage one might gain from a backpack. This is important in France because all the kids have to carry all their textbooks and exercise books into school every day. There are no lockers. The bags weigh a ton. As a result, French school kids have terrible back problems.
It was surreal waiting outside the school leaning next against a palm tree. And hard for the kids too, trying to concentrate on academia while outside there is beautiful weather, a beach, tennis courts, horse riding etc etc.
My teenager was very brave, starting secondary ‘big’ school in a foreign country. The first term she was terrified: she had to get used to kissing everyone she met on both cheeks which made getting on the school bus quite a lengthy process. By the second term she’d gained enough confidence to start being naughty at school.
She settled in just fine. It was me that had the problems. Being a single mum in a foreign country in the countryside was no fun. I was bloody lonely. The French were not friendly even though I spoke French. France is not a ‘mates’ culture. They hang out with their family. The ex-pats were not in general the sort of people that I would mix with in London. Many of them were a bit ‘Del-boy’, absconding fathers or worse, actual criminals on the run. There were hardly any women (2).
It’s an ex-pat cliché but they did all drink loads. After a couple of months my kidneys hurt from drinking so much rosé. I grew to like a lethal short called a Slippery Nipple: Sambucca, Baileys, with a Grenadine nipple on top.
I was obliged to spend time with the bored British mums, none of whom were single (3). A typical day would be taking kid to school then meeting at the bar opposite Leclerc. You’d do your shopping and then order a few rosés or kirs. Cocktail hour started at 11. All they ever talked about was plastic surgery, diets and how much their husbands annoyed them. Next thing you knew it was tea time so you’d drive home gingerly, quickly tidy up the house so it looked like you’d done something productive, brush your teeth and make dinner.
Some days though I was so depressed and lonely I didn’t even bother to go to the shopping centre (which was basically the only place open in winter…off-season is deathly dull). I just switched on the TV which had Sky. I would watch all the medical and legal dramas and then start on the True Movies channel. I knew I’d watched too many True Movies when they started to repeat the same ones a few months later. I could have pretty much written the script for one myself. A typical storyline would have a psychologically disturbed mother/brave divorcee, who met with Prince Charming/axe murderer who would then steal her child and she would spend the rest of the movie overcoming the illness/beating the odds in some way. It appeals to housewives’ worst fears.
In the evenings, on non-school nights, aching with isolation (for there was no work off-season), I’d drag myself to the only place open, an English pub. It was clear that I didn’t fit in. One Liverpudlian said to me, you’d get on with M, he’s your type, he’s got a bookshelf, like, full of books.

I met with this guy M. I saw the famous ‘bookshelf’ which was singular and measured approximately 15 inches in length. M, however, informed me that he didn’t believe in fiction and would only allow reference books such as dictionaries on this famous bookshelf.
Sometimes you’d meet someone, get on quite well and then further along in the conversation discover that they’d killed someone back in England and could never return. Nobody was who they seemed.
One of the British mums, whose son was grown up, kept talking about her boyfriend. I saw a picture of this boyfriend and he was very good looking and much younger than her. Over the months she continued to talk about him. I asked why he never visited. She said he was working on a building project in England. One day though, to prove his love for her to me, she showed me a long hand written letter from him. Suddenly the penny dropped. I asked a mutual friend if he were in prison.

How did you guess? she asked.

1. So called because it is a ‘sink’ comprehensive school, the standard State education. Other parents also contort themselves to avoid sending their kids to a bad local school. They buy studio flats in the catchment area of a good State school if they have the money, sometimes pretending that they have split up. It is a mark of shame if you have only gotten your kid into a bad school. Other parents pretend to be religious. It’s amazing how many children suddenly start attending church at the age of 10. This is to get into a church school. I knew one Jewish mum who got a job at a Church of England school in order to gain entry for her daughter. This whole subject is worth a post in itself.
2. This was because there is no work for women off-season, that is, mid-October to beginning of May. There is only cleaning. The men however have plenty of well paid work… building. For mothers it is particularly difficult because French summer school holidays last 10 weeks from the end of June till September, so effectively you have to work, not see your children and pay for child care in order to work the season. Hence dearth of women in winter. You’d think that’d be good for pulling purposes but let’s face it, French prime minister Edith Cresson was right, British men don’t really like women, and have a marked preference for football and beer.
3. Many of them came from up North so they were quite old-fashioned. Their husbands didn’t like their friends coming over in the evening. If I was round their house, I had to vacate the premises before hubbie got home for tea which of course had to be on the table as soon as he got in or they’d get in trouble. A culture shock for an independant London mum.
4. A similar incident: I was talking to a very glamourous lady at a baby shower. She bemoaned her life since her recent divorce. I was feeling sympathetic until another woman told me that the reason this lady was divorced was because she’d had an affair with the pool boy and decided to get rid of her now inconvenient husband by shopping him to the police for hawking fake Louis Vuitton handbags. He was now in the local jail. All very Desperate Housewives.