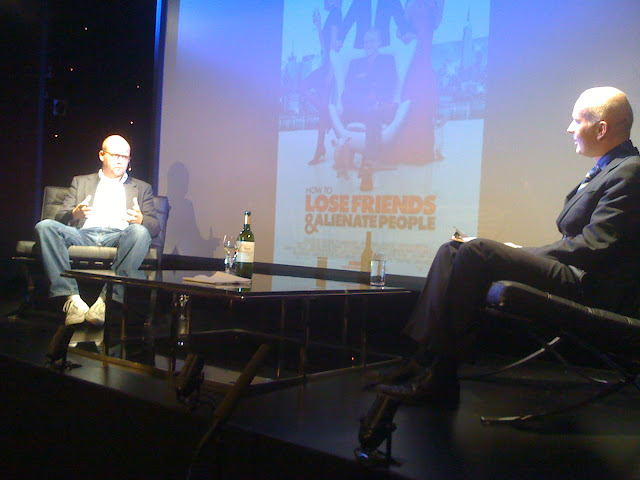 Years ago I was hired to photograph an opening at the Photographer’s Gallery for the Observer newspaper. Several celebrities were there. Normally I don’t do that kind of photography ‘papping’, but I was trying to get a foot in the door at the Observer.
The journalist on the story was Toby Young, author of forthcoming film How to lose friends and alienate people. He was rather self-important and unfriendly towards me. The fashion editor at the Observer, Sally Brampton (1) (now an author) was outraged by his behaviour. Referring to me, he kept saying “Where’s my monkey?” (photographers are sometimes known as ‘monkeys’ in Fleet St. slang), which admittedly is not very polite and you certainly would not say it about a woman photographer. Sally said that Toby Young was arrogant because he was a lords son.
During the evening I was the only photographer to have spotted the writer Julie Burchill (known for being acerbic and controversial). I started to take a picture of her. Peter York, editor of Harpers & Queen, came up to me and pleaded with me not to take a picture of her “She’s pregnant you know”. Despite the fact that photographs of her were rare, I complied (idiot!). Julie Burchill thanked me though, which was sweet.
I met Toby on a few occasions after that. Once I saw him at the Café de Paris, a fashionable nightclub at the time, in Leicester Square. I was sitting down feeling alienated as I always did. Despite spending the 1980’s going to fashionable parties and clubs I often felt miserable and uncomfortable, mainly, I now realise, because I was the only person not on drugs. Toby Young sat next to me and chatted. I was a little drunk and asked him:

“Aren’t you a member of the aristocracy or something? Is that how you got work at the Observer?” He replied, with an arched brow: “Why, aren’t you a believer in our great meritocracy?”(2)”No, I’m not” I snorted.

The next time I saw him was at Groucho’s, a private members club in Soho for the literary elite. I apologised for having been rude. He was quite affable and offered me a drink. I did think, actually he’s a good sort really.
About a year ago, going through some old photo’s from my archive, I looked him up on Facebook. I messaged him and received a friendly reply. We communicated a few times since.
Through Facebook Toby invited me to his Q & A session at Harrods, to mark the launch of the film “How to lose friends and alienate people”. He was witty and self-deprecating during the interview and pretty good at accents and mimicry. He also gave the impression of vulnerability. When the audience were invited to question him, nobody put up their hand, so in the interests of helping him out, I intervened.

“Do you think you lose friends because you are blunt and say what you think?” I began.”Well, like many men, I have difficulty distinguishing between appropriate and non-appropriate behaviour. Fortunately I’m now married, and my wife gives me good advice, telling me “NO, you can’t say that”.”I continued: “Well I’ve noticed on Facebook you have tons of friends. In fact, one could say that you are a bit of a Facebook slut.” (At this the interviewer and the audience titter).Toby:”Well, it’s the only circle that I’m accepted into. Actually Watchdog have done a report on this. They created a fake profile and asked to be my friend. I accepted. Then Watchdog called me saying that anyone could have found out all kinds of details about my private life and then committed financial fraud using those details. I pointed out that as I’ve written two volumes of autobiography that my private life isn’t exactly a secret.”

Afterwards Toby passed me by as if he didn’t recognise me. I went up to him and introduced myself, repeating that we worked together many years ago and that we communicate on Facebook.

“Oh, er, how are you?” he said politely. But he looked flustered and tried to avoid my gaze. I then said, thinking that perhaps he was a bit freaked out by the interview: “You did really well up there. Great interview. Well done”. “Er yes” he said a bit oddly.

By now a queue had started to form of people wanting him to sign books, so I backed off, perusing the Food Hall on the way. The rest of Harrods is so tacky.
Despite all social networking sites, where adding people becomes an addiction for some in a bid to look popular, research indicates that nobody has more than 5 close friends and 150 acquaintance-type friends.
(1) I had a bit of a history with Sally Brampton too. I had to shoot the London Fashion Week for the now defunct Honey magazine. It’s probably one of the toughest assignments in photography. Believe me. Don McCullin, the war photographer, (who also shot the ‘park’ photographs for Antonioni’s seminal 60’s film ‘Blow up’) did the Paris shows once and was shocked by the ruthless behaviour of the fashion world.
Shows never start on time and photographers aren’t given seats. You have to wait for hours on bended knee, holding heavy equipment, in the tiny space between the catwalk and the front row seats. All the most important fashion editors are in the front row and photographers have to work hard not to sit on their knees. The Vogue editor is naturally the most eminent and you daren’t go near her. Surrounding her would be all her young haughty assistants. Once while waiting for a show to start, a light on the catwalk blew up and smoke came out. I watched in amazement as the entire Vogue posse literally trampled on people in a panic attempt to leave the marquee rapidly. They looked pretty sheepish when they had to return 10 minutes later because there wasn’t a fire and it was a false alarm.
At one particularly late show, I was crouching in front of Sally Brampton and she kept kicking me in the back. Eventually I kicked back, unheard of in those circles. Later when I was given this job by the Observer and introduced to Sally, I felt a bit abashed.
“Hmm” she said regarding me with a wry smile “I think I kicked you at the shows”.
Relieved that she hadn’t fired me on the spot, I replied: “and I think I kicked you back.”
(2) I just found out, from Wikipedia, that it was Toby Young’s father, who was indeed a lord, that originally coined this expression ‘meritocracy’.