Earlier in this post I talked about my darling Anglo-Pakistani pupil. She just called to say that she got 2 ‘A’ grades for her GCSE’s in English Literature and English Language. She was such a delight to teach. These strict Muslim families must be doing something right. In fact I’m just about to run up a burqa on my sewing machine for my own sweet teen.

Some hope.
Today my teenager decided to dye her hair black. She wanted to look like Helena Bonham-Carter in Fight Club (she’s already been moving towards that look with an unwashed tangly bob hairstyle and pale face/purple eye make-up, all très heroin chic).
She goes down to Superdrug and buys the black dye. Apparently they are not allowed to sell permanent hair dye to under 18’s. The shop assistant asks her age. My teenager replies: “I consider myself to be timeless.” This does the trick because the shop assistant shrugs and sells her the dye.
My teenager then squirts some of one of the bottles in the package all over her head. She hasn’t read the instructions. She was supposed to mix two bottles together. Belatedly she mixes them together and covers her head with the stuff. She uses my white towels to do this. Yup.
She then runs up to me, screaming in panic, because while her hair is turning black so is the skin on her face and neck.
She looks more like Helena Bonham-Carter in Planet of the Apes.
Of course all of this is because school starts tomorrow and she wants to look cool. 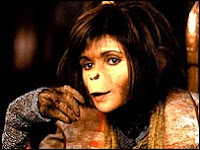 Helena Bonham-Carter in Planet of the Apes