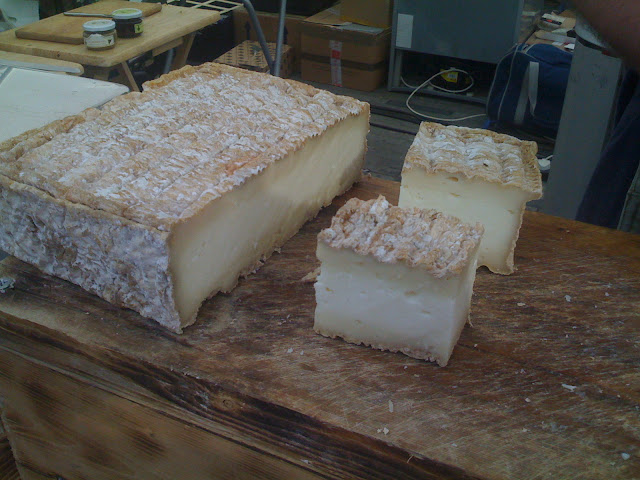 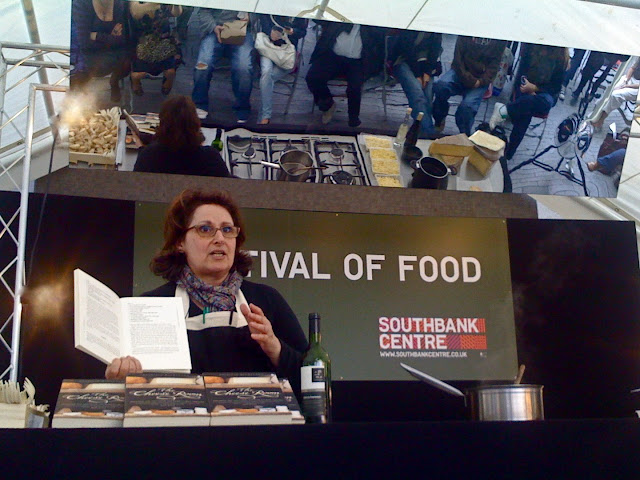 The South Bank food festival yesterday: a lovely sunny day by the river Thames. Why haven’t I done this before? Such fun. Rock ‘n roll for the middle aged.

The afternoon started with Patricia Michelson of La Fromagerie demonstrating how to make cheese fondue. She is a little more experimental, trying a wider range of cheeses in her fondue than your bog standard Emmental and Gruyère. She says you can use Cheddar, or Tome or add Brie at the end. One must always use a high fat cheese though.

For this recipe she used Swiss Emmental not French. Swiss Emmental has less holes in it and is stronger. Then she used Comté, Beaufort, Gruyère arpage, and lastly a whole Reblochon cheese (which she scooped out of the skin) to make it really silky.

I like the different stages a cheese fondue goes through; at the beginning you get a more liquidy oily winey scoop on your bread, then as it cooks down, the cheese becomes stretchier and thicker. At the end you can dig out the crusty bits from the bottom of the pan.

Of course there is always the ‘forfait’ to pay if you drop your piece of bread in the fondue pan. In France this usually means you buy a bottle of white wine.

Patricia Michelson recommends any dry white wine or Chignan from the Savoie if you want to spend a little more.

The audience were given little tastings. The smell of the steaming fondue was driving the crowd mad with hunger. I thought it was going to turn into a scene from the book/film Perfume with hungry people tearing Patricia Michelson and her assistants apart to get some of the fondue. 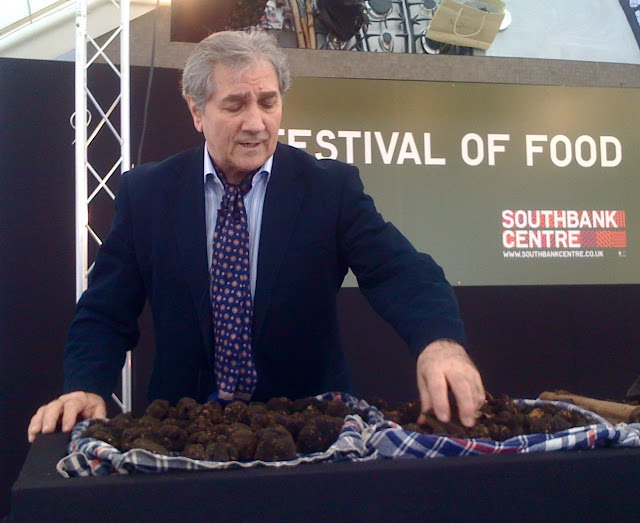 After that an Italian man, Bruno Giorgi came to talk about truffles. Unfortunately his undoubted knowledge was rather lost in part due to dodgy sound and also his strong Italian accent. He talked about the different tastes that truffles have depending on the type of tree, Oak, Willow or Poplar for instance, under which it is found.
He prefers the white truffle to the black; there is more water in it and it is fresher. People in Italy have killed each other when truffle hunting, they can be worth hundreds of thousands of pounds.
I’ve never really got truffles. I went to Aups in Provence for the October truffle market. I bought 3 tiny ones for about 25 Euros. As advised, I stored them in a paper bag with eggs; the smell will penetrate the egg shell and flavour them. I added them, grated, to tagliatelle and creme fraiche.
My guests and I sat around eating and making little polite noises…umm, lovely etc.

Then finally I admitted: “Er, I don’t really taste the truffles. It’s a bit like wild mushroom but there’s not as much. Does anyone else?”

Relieved, my guests confessed that they didn’t get what the fuss was about either. 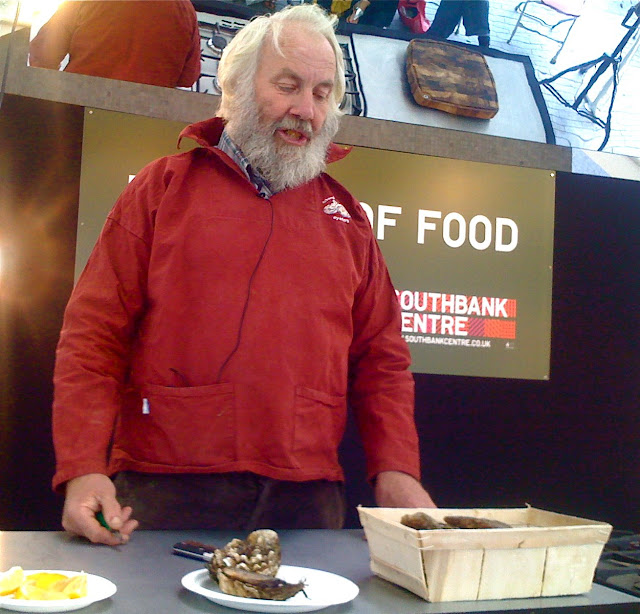 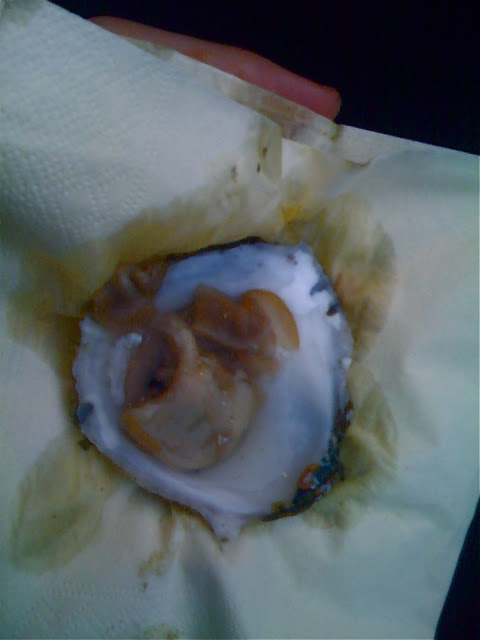 Next up was an oyster fisherman Richard Haward from near Colchester. Oysters used to be so cheap and common in the Victorian times that apprentices had it written into their contracts that they wouldn’t have to eat them more than twice a week.
Now the marine environment is so messed up that they are very expensive. This fisherman, who gave his entire talk with his eyes shyly cast down, said that Colchester ones were the best, the saltiest. Cornish ones and Scottish ones are not as good, he stated.
He became animated once he started opening them and handing them out to the gannet-like audience, crowding the podium. I’ve tried oysters twice and hated them. Why would I want to swallow snot? I have thought. I was persuaded to try a Colchester oyster.

“They aren’t slimey, these ones, you’ll see” said the oyster man.

Here goes…it was like downing a slice of the sea. Fresh, slightly al dente, a rush of salt water. Not terrible. But it’s not my kind of thing. 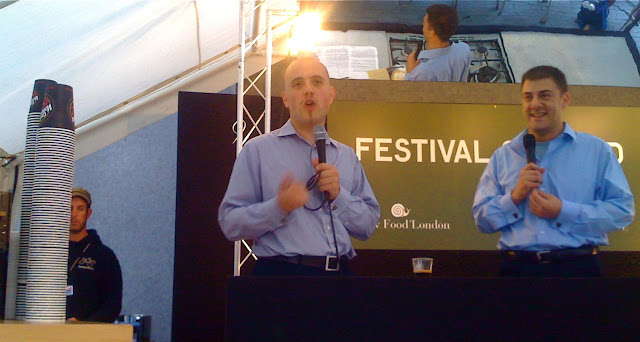 Lastly we had the coffee twins…the guys that run Coffee bar of the Year, Cafe Vergnano 1882.
Never in my life have I seen two people so enthused and passionate about their subject. The beans (Nicaraguan) are important, the temperature (between 220-225 degrees) and time (18 minutes) of the roasting is essential, the machine they make it in is vital (Elektra Bell Epoque each made by hand in Italy), even the milk must be foamy not frothy.
They explained in detail about why certain coffee chains are rubbish.

“It’s a cup of hot milk. It’s not coffee” they sighed.The coffee twins handed me a glass of expresso. I smelled it. I sipped it. “Er, am I allowed sugar?” I asked tentatively. The expression on their faces showed their disgust. The audience laughed.

The expresso tasted almost medicinal. Creamy on top, the body was pure, almost essence-like in flavour. It was also rather bitter. That’s what it’s supposed to taste like apparently.
Starbucks etc haven’t done very well in Italy. The Italians just won’t buy a watered-down crappy product.

If you are hard core, you will drink a Ristretto...a short expresso. 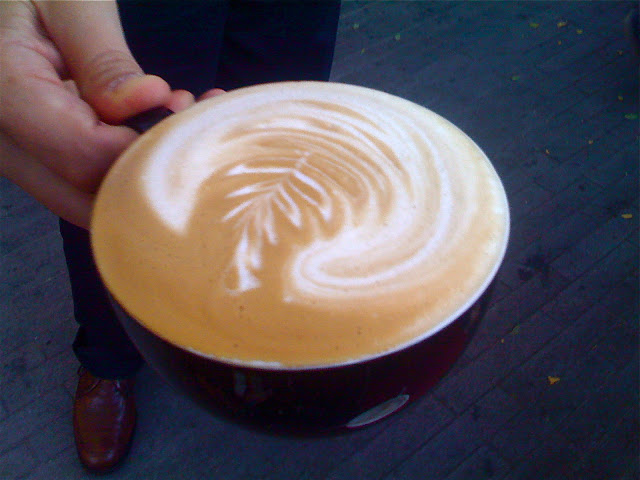