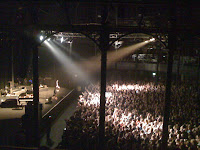 She took to the stage wearing an orange fleece cape and orange bedsocks. I think we can safely say she is not vain. Her vocal dexterity and pure tone are impressive.
Camille was soon joined by a gang of backup singers and beat boxers all in orange and black. They produce an incredible array of sounds considering that there are no instruments. Her big hit is “Je vais prendre ta douleur”, a jazzy, unique track perhaps one of the most accessible on her latest album which is quite avant-garde.
At one point Camille asks the audience for black or orange shirts

“No not that one!” she admonished when handed a black shirt “one with long sleeves.”

A woman passed over an orange long sleeved Tshirt. Camille sniffed it contemptuously “You sweat alot huh? When was this last washed?”.

Then Camille did a bit of ‘clowning’ that is a section of business with knotting and buttoning the shirts together. Making her stage outfit from the audiences clothes. It was quite funny except that she showed the fact that she had not mastered clowning to the same level as her skill in singing when one of the crew came on to help her disentangle the shirt from a mike stand and she shouted at him:

My sister, who kindly gave me a ticket to this event, has done extensive clown training and observed that a true clown would have incorporated the stagehand into the piece.
Her gifts however are undeniable. I like the fact that she is unconventional and generous with her talent. She gave at least three encores to this mostly French audience. She joked that the concert would last 8/9 hours.

Then she called out into the dark “Jamie? Are you there?”

There was silence. “Jamie? Did you come here?”

Then a young man stood up in front of me “I’m here”.

“Come onto the stage and jam with us” suggested Camille.

We waited sometime for ‘Jamie’ to reach the stage, so long in fact that Camille wondered aloud if he had got lost or not been allowed access by security. Finally Jamie arrived in the spotlight, revealed as Jamie Cullum, the young British singer/ pianist. Bravely they jammed, Camille singing, Jamie using the piano as percussion. Whenever it didn’t seem to work, Camille would stop the proceedings and say:

“No, lets do something different”

We were watching a workshop on stage. Would Amy Winehouse have the courage to do this? Would Madonna?
Then Jamie accompanied Camille on piano for a swooning romantic jazzy version (Camille used to sing for the bossa nova outfit Nouvelle Vague)of Tuxedo Moon’s “In a manner of speaking”. Sublime!  At the end Camille turned her back to the audience to reveal that her black dress was so low cut that we could see her bottom. Cheeky!