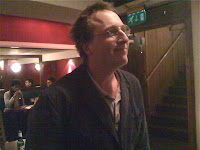 I have no luck at this venue. I arrived with my daughter, ordered drinks and food, and sat down. Half an hour later, a buxom waitress, clearing tables, asked:

“Well I’m afraid I’ll have to ask someone if she can be here”.

“Listen” I plead “can’t you leave it? We are hidden in a corner, she’s not drinking, we’ve already ordered, it’s a private function and look, you have a children’s menu”.

“I take it you have no children” I ask her.

At this point I know I’m defeated:

The manager comes over and says my daughter has to leave. He refunds the money for the drinks and the food. He agrees that it’s difficult for every pub in the U.K. has different licensing laws when it comes to children. In this pub, children can only stay until 6 p.m.

“The skeptics organisers know about this rule” he states.

My daughter gets the tube home. I spot Jon Ronson sitting in a corner, guzzling nervously from bottle of beer and googling details of his talk on his iphone. I tell him about my daughter.

“Really? I was thinking of bringing my 10 year old son”.

I mention the situation to a couple of Skeptics organisers.

“We didn’t know that” they say.

Later, when I tell the pub manager that Jon Ronson was going to bring his son he replies:

“Well we would have cancelled the talk in that case.”

Ridiculous. It’s not as if it’s a gin palace or bordello. The room fills up with men. To the skeptic next to me I ask:

“Do you think skeptics are mostly male?”

“No, I think they are mostly drinkers” he quips.

Heavenly music greets Jon Ronson as he starts. He struggles with his microphone, one of those headphone jobs that singer/dancers like Britney uses.

“Is this what the creationist was doing last week?” asks Jon, fiddling.

“No, he managed to use it allright” retorts an audience member.

Jon talks about the importance of skepticism after 9/11. He goes onto to describe his ‘partnership’ with Robbie Williams.

“Is this what you want to hear? Is it ok?” he asks

“No, get to the nitty gritty” grizzles one skeptic.

“I thought this was the nitty gritty” replies Ronson.

“Snob” I snarl at the skeptic, hoping he won’t stop Ronson spilling the beans about Robbie. He attended the UFO convention in Nevada with him…

“the only alien being to arrive at that conference was Robbie Williams on a private plane”.

They met Anne Andrews and her son Jason, a reputed Indigo or Crystal child. Apparently you can do an internet questionnaire to find out if your kid is an indigo child. ‘Does your child have difficulty with authority? waiting in lines? get bored easily?’ As Ronson says, if you look at the questions, most of our kids could be considered Indigo children.  Anne Andrews(1) complained to Robbie and Jon Ronson about Jason being bullied in their small Norfolk village. People shout at him “freak”. Coincidentally this started at the same time as she published her book entitled ‘Jason, My Indigo Child: Raising a Multidimensional Star Child in a Changing World’. Ronson considers that the Indigo children phenomenon is a counter-reaction to the over-medicalisation of children’s behaviour. Approximately 2 in every class of kids (in the U.S.A) is on medication for ADHD.

I asked him if he had ever been convinced or swayed by anything, and if not, why Robbie Williams was hanging out with him. Ronson is a total skeptic, he says, and Robbie Williams swings between both camps; skeptic and believer. The only thing he does believe is that many of our leaders could be considered to be mentally ill.
Ronson has debunked the fraudulent psychic Sylvia Browne who

“always gets it wrong. If Sylvia Browne says your missing kid is dead, he’s at the shops”.

He’s also investigated Omar Bakri, ex-CIA agent Colonel John Alexander and the Bilderberg group. It’s clear that when he talks about his subjects that he actually has quite a strong affection for them, even Omar Bakri who told the Jewish Chronicle that Ronson would “burn in hell”.

One of the audience asked if there was anyone too “scarily crazy” for him to tackle; Ronson replied that he couldn’t write about anybody he hated. “What about Scientology?” asked someone else. Ronson is not afraid of them and told an anecdote about John Sweeney, the BBC reporter who infamously screamed uncontrollably during an interview with the Scientologists (link here).

“Sweeney is a nasty bastard, he screamed at me once”.

The most vicious people “Nazis!” he has come across so far are the “Islington mothers” on Mumsnet.com. There is an archived thread on Mumsnet about Ronson. (It’s pretty funny).

Somebody asked “What would you have asked Jesus?”.

“Are you really the son of God?” responds Jon Ronson “and Mohammed, you’d have to ask him if he approved of what has been done in his name”

“Obviously I’m adoring it. At first I thought ‘evil geniuses’. Brilliant. How wrong was that? It’s all become very sour and snide.”

A member of the audience made the observation that Ronson’s work is divided between the macro; big themes about conspiracy theorists, Bohemian Grove, alien goats; and the micro; domestic everyday observations.

“What interests me is why people behave so crazily? It can be small scale or large scale. In my writing, there is always opposition to the domestic stuff. But I prefer small scale, Nick Hornby style stuff, like how you fuck up your kids inadvertently. He does it well. Some people, like Liz Jones, do it badly. The domestic stuff has become devalued. Some of my editors think it’s icky.”

Ronson talks about the pressure of producing a weekly column:

“You can see the writers, like Tim Dowling, my replacement,  falling apart, every week, people destroying themselves, using anything, everything, to write the column”.

I mention cringing when I read his weekly Guardian column which repeatedly mentioned his annoyance with his actor neighbour who wouldn’t ask what Ronson did for a living. “Have you lost friends from your column?” I ask.

“Yes. Like Patrick Marber, who I hate. Also my neighbour who eventually asked me if it was him I was writing about. You see, being a writer is all I have” says Jon sweetly.

Ronson stopped doing the Guardian column and is concentrating on writing screenplays. ‘The men who stare at Goats’ is now in production starring George Clooney. (At least he hasn’t got Simon Pegg playing him, which was Toby Youngs’ fate).

(1) Anne Andrews, in true Rolls-Royce driving Indian child guru stylee, gads about town  in a pink stretch limo with the number plate UFO1, I am informed. Now that’s the kind of highly evolved behaviour I could get into!