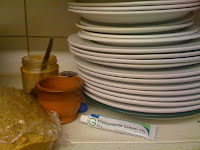 At the café this week as it was Day of the Dead, so celebrated in Mexico, I cooked my chilli sin carne. Soak Black beans. Fry onions, garlic, add chopped tomatoes. Add dark chocolate and the beans. Finally add a teaspoon or so of chipotle (a smoked chilli pepper) paste if you have it. I got some from my trip to Mexico last year, visiting the mole and chipotle factory in Xico.

I spent some days in this tiny mountain village, near Jalapa (where Jalapeno peppers come from). I’d just seen the movie ‘Apocalypto’ directed by Mel Gibson, which recounts the moment when the Spanish arrived, leading to the downfall of the Mayan culture.
In Xico, everyone looked so Mayan; long aquiline profiles, hooded eyes, small, stocky stature.

“They look straight out of ‘Apocalypto’!” I exclaimed

“Not surprising. Many of these people were extras as it was filmed in the area” said a local.

This festival was to celebrate El Virgen, the Virgin Mary. The streets were covered with colourful sand paintings, along which the processions lumbered. A heavy float containing a statue of the virgin in her rather gaudy finery was carried, preceded by women swinging incense. By the second day everybody was pissed and dancing trance like folk dances in the street. The atmosphere and music in the thin bright air was mesmerising. In the afternoon it rained and I watched as the whole village recreated the sand ‘carpets’ in minutes, using large wooden stencils and coloured pots of sand.

Back in London, in the café, I tried to make corn tortillas but they failed. I had the wrong cornmeal and the dough was more like polenta.
One of the gorgeous staff turned up saying they were itchy because they had been having threesomes all weekend. Suffering from a similar problem, (but no threesomes!) I just happened to have a tube of cream for thrush. It was placed for general staff use on the spice shelf.  Like Barking Batteria, the samba group I sometimes play with, there is a sexual openness that is refreshing. Flirtation abounds. One particularly Venusian worker has already cut a swathe through half the staff, leaving them love-lorn and mooching amongst the pots and pans; whispers and cuddles as they brush past each other on the way to the oven; glances and coquettish quips across the mango soya shakes.
‘Barking’ has told me, only mildly joking, that I will not be considered a core member until I have had at least a threesome with members of the band and caught some kind of STD or crabs. It sounds easier to join the Hells Angel’s where I believe, you only have to bite the head off a live chicken and wear your leathers after they have been pissed on by the rest of the gang.
Food and sex are intimately connected are they not? There is no more guaranteed method to seduce a woman than taking her out for a meal. Vice versa, they say the way to a man’s heart is through his stomach. My particular favourite aphrodisiac is sushi; light, clean and revitalising. The fetish scene, for instance, has ‘munches’, non-sexual gatherings where people who are interested in BDSM can meet, eat and chat.