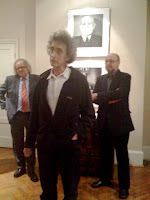 The Freud museum have some great exhibitions plus you get to look around a historic house at the same time. Freud, who himself only lived there a year, had lovely furniture: painted cupboards (Austrian country style), his famous couch, covered with dark red Arabian carpets, many African sculptures and your basic Jewish middle-class Hampstead interior circa 1940. I love looking at people’s houses. I just wish they still had the kitchen. There is also a family tree on the wall. I found it amusing that his wife was called Martha (mater, mother?)
On Thursday night the Freud museum held an opening for an exhibition around the theme Fathers and Sons. Almost everybody in attendance looked ancient and quite a few looked like Sigmund Freud himself. There was one guy, complete with glasses, white beard and domed forehead who was a total doppelganger. If he applied to a lookalike agency, he’d be inundated (although they perhaps have more call for Posh-Spice-a-likes).
Introducing the show were various dignitaries from Austria, one of whom gave a speech in ‘Cherman’. He had a translator, but it was easier to understand the German, where I got about 1 word in 5, more than I did from the translator. In the end he gave up, saying:

I wouldn’t want to burn you anymore.

The director of the Freud museum, another man with mad white sticking out hair (a style curiously popular with academics), gave a little speech:

We like the artists to focus on the fact that they are exhibiting in this historic house. Psychoanalysis had unfortunately in the last 40 to 50 years become very establishment. This exhibition shows a time when psychoanalysis was still revolutionary.

The exhibition focused on two people I knew little about: Hans Gross and his son, psychoanalyst Otto Gross.
Hans Gross was one of the creators of criminalistics, crime scene investigation. Alongside the progress he made in this field, he also had some pretty dodgy theories, about the link between the shape of skulls and criminality. (Precursor to the holocaust. As my friend Dvd says, (and calls Freud ‘Fraud’) things like the holocaust don’t appear out of the blue. The ingredients are all there, in the zeitgeist, and all it takes it a little nudge for them to appear fully grown, in concrete form).
His son Otto Gross, was an anarchist, drug addict, goddess worshiper and free love adherent. He held ‘Cult of Astarte’ orgies in a barn in the Austrian countryside. He also was a founder of the Monte Virita commune in Switzerland. The  black and white photographs of this community look like any hippy festival, long haired naked people cavorting in the countryside, except that this is early 20th Century.
He slept with Frieda Weekley (who went on to have a relationship with D.H. Lawrence) and her sister. Two other women that he slept with, influenced by him, committed suicide. (As this was when they became pregnant by him, clearly his goddess-worshipping tendencies escaped him at this point).
His father, Hans, then used his connections to have him committed to an asylum, in part to get custody of Otto’s children. There was an international outcry and Otto was released.
Otto detested his father but needed him as a counter-point. When Hans Gross died, Otto died not long afterwards, directionless without someone to hate.
The author Franz Kafka, a student of Hans Gross who, having met Otto Gross on a train, reputedly based his book The Trial on the Gross asylum case.
The exhibition highlights a fascinating period of history, with everyone shagging everyone else. And of course the D.H.Lawrence obscenity trial for Lady Chatterley’s lover heralded the start of ‘Free love’. The 1960’s started here.