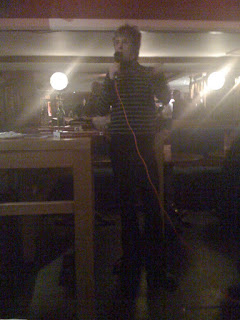 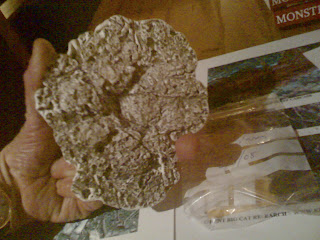 A cast of a paw print

Hair cut in a Small Faces blond mullet, carrying a Beatles satchel, he started by thanking his understanding girlfriend.
For 20 years Arnold has been involved in Big Cat research, logging strange animal sightings from Kangaroos in Beckenham, the Winchmore Hill cheetah to the Beasts of Bodmin and Exmoor.
He has two areas of interest: Big Cats using actual zoological research and folklore, for instance the 1961 wolf sighting on Clapham Common, Seals on Hampstead Heath, Mothman, the bear of Hackney Marshes and the Highgate Vampire.

There have been Big Cat sightings in this country since the 1700’s. In the 60’s and 70’s  it was easy to buy Big Cats. You could buy a cheetah from Harrods or a lynx from the local pet shop for £40. Cute when they are young, the cats grow, need more feeding and eventually are let into the wild by their owners.

Neil Arnold recounted the incident in Acton when a man went to a pub with his pet Puma. Things got out hand and the puma destroyed both the pub and the police car sent to control it.

The lynx is native to Britain, were hunted by the Tudors, and there is no evidence that it died out. In recent years they have been re-introduced into the Scottish Highlands. A lynx is not a leopard, it’s like a large cat with a stubby tail.

Arnold said that there is no such thing as a Black Puma. Puma’s are fawn coloured, they attack humans, are up to 5 feet long. The Puma is the largest of the lesser cats, they cannot roar, they scream.
There is no such thing either as the Black Panther, it is actually a black leopard. You can see the rosette pattern if you view them close-up. Two normal leopards can have 4 offspring, of which one can be black.
Legendary big cats such as the Surrey Puma tend to be spotted for about a decade.
There was a black cat shot in Greenwich in the 1980’s.
The beast of Bluewater (a well known shopping centre near the Beckham’s house ‘Beckenham palace’) was seen 40 years previously. Arnold believes that this sighting is a possibility. Big Cats have certain types of habitats, plenty of water, and can roam vast territories of 200 to 250 square miles. The area around Bluewater, Kent, has all these features. Arnold claims that there are 10 to 15 black leopards in Kent alone.
Neil Arnold has had several encounters himself; in 2000 in the Medway he was alerted to the presence of a leopard while in a field by the sound of the sheep who started ‘coughing’.
Monster hunting has it’s dangers: while tracking footprints in the snow of the Dartford Lynx in 2003, Arnold was shot at by a farmer.
In 2001 a leopard was spotted around passing through back garden in Cricklewood, my area. My daughter and I were rather excited about this, especially as we had just moved in.
Eventually it turned out to be a lynx when it was caught, injured, in Barnes. It had been on the loose for about 3 or 4 weeks. Named Lara, it was housed at London Zoo for a while but has now moved to France.
Some sightings are less convincing: in 2005 in Sydenham, a man claimed that he had tussled with a leopard in his back garden. He had a scratch on his cheek to prove it. Arnold explains that lynxes would not just put one scratch, there would be four, spaced in a certain way.
In 2007 a courier in Southwark, along with several other witnesses saw a puma crossing the road.
Sheep killings cannot be by dogs as large cats have tongues like sand paper. They like to peel off the flesh and take their kill up a tree. Dogs don’t do that. Another way of telling if it is a big cat is by the prints. Cats leave paw prints as they can retract their claws, dogs can’t. Dog prints are more symmetrical and don’t leave scratch marks up trees.
There is no chance of lions being on the loose, they tend to go about in prides.
The RSPCA denies the presence of big cats and have said that “vehicles are responsible for dead bodies”.
Last month (October ’08) there were big cat sightings from the Isle of Sheppey which is very flat. Arnold set up a camera in an alleyway for a week. A week later a cat was seen twice in the alleyway. Just like any documenting of wild animals, it is time consuming and difficult to get evidence.
After the break, Arnold was bombarded with questions from the skeptical audience.
One man, who has spent a great deal of time in Kent believed that there are big cats on the loose. He said that although his belief was based on anecdotal evidence, he’d spoken to so many people that had seen big cats.
Others were less sure. Jack of Kent in particular used his own sand papery tongue. He machine-gunned Neil Arnold with questions:

Neil balked: I don’t want to publish all of my evidence. There are too many weirdos out there. Although I have given most of my footage to Sky News.

Jack rocked back on his heels, licked his lips in a cat-got-cream way and pounced, triumphantly dragging Neil down from the tree:

Therefore on crucial evidence we just have to take your word for it?

Case closed. By this time, Neil Arnold looked as if his skin had been ripped off.

Jack confessed: It just so happens that I’m a lawyer. Roars of laughter from the assembled skeptics.

Later, when chatting, Neil admitted that … Looking for big cats is quite anoraky.

You’d prefer it to be parkery, wouldn’t you? I asked, noting his mod origins.