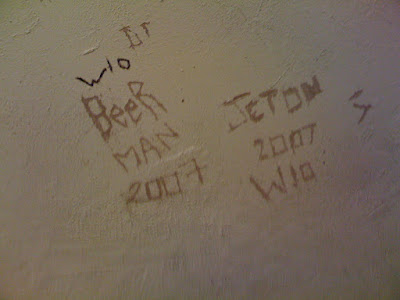 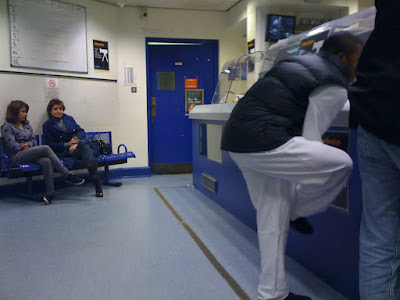 It’s the police. Your daughter has been arrested. You need to come down to the station.

Is this a hoax? I demand angrily.

You see I once got a hoax call a year or so ago saying my daughter had been arrested.

No. She’s been arrested for smoking cannabis.

Still sure it was a hoax call, I say, haughtily: Can I speak to somebody else please?

A deep man’s voice came on:

Yes, I’m afraid your daughter has been taken in. This is not a hoax. She was caught with her friend N. We need you to come down. Shall I pass you your daughter?

My teenager, sullenly, to me: Yeah.

Me: Is this true?

Me: You told me the other night you weren’t doing this.

Me: You weren’t smoking?

Her: I was holding it for my friend.

You were holding it for your friend, I repeat scornfully. So you weren’t smoking?

I hear a hesitation, under the maternal interrogation:

The sergeant comes on again.

I say to him: I can’t come right now. I’ve got an emergency appointment at the dentist.

Well, come after that then, he says cheerily.

This is good. A warning shot.

I’m rather angry so I say:

Put her in a cell. Frighten her. Put handcuffs on if need be.

But, I say relenting, she is only young. This is a first offence. I wouldn’t want this to go on her record. Affect her future.

The sergeant replies: I wouldn’t worry too much.

The school calls. I assume they know what is happening. So I tell them. The deputy head sounds not too bothered.

Yes Madame. Good. I zink she should be given a fright too.

I told them to put her in a cell.

When I get to the police station later, the mum of the other girl is sitting there with a man friend and a solicitor. I, as usual, am alone. I get a little anxious.

Do we need a solicitor? Surely they are just going to tell them off?

The solicitor says: Well, it could go to youth court.
I speak to the duty sergeant. He intimates through sign language that she’ll just get a slapped wrist. So I don’t call a solicitor.
I’m led inside, through a warren of rooms, to a big room at the back. It’s like being on the set of Hill St. Blues. There’s a big desk with perspex screens. One tiny plainclothes policewoman in stiletto heels is saying:

…she says she wasn’t shoplifting, she was merely showing the item to her husband. She also says she only bit the policeman… I didn’t hear the rest.

A cell is unlocked and my daughter is led out. She is wearing white sweat pants and plimpsolls that she wasn’t wearing when she left this morning.

I start to laugh: My god it’s like Guantanamo bay.

I try to stifle my laughs, knowing it’s not the right reaction.

We had to remove her clothes, M’aam, due to cords on her trousers and laces in her shoes, says the desk sergeant.

In my head I’m thinking, what in case she hangs herself? For this?
I try to look stern. Actually I’m fascinated. I’ve never been arrested and this is the deepest I have ever been into a police station. I’d like to hang out, listen to the stories, ask questions.
My daughter is read her rights. It’s all starting to sound quite serious. I thought that they would just tell her off and that would be it.
My daughter has her DNA, her fingerprints and her photo taken. These will be on record forever.(1) I ask if I can have a copy of the photo:

No we can’t have a copy. The policeman and policewoman are the ones who called me. I apologize again for not believing them. The policeman, who has already admitted to me that he smoked dope at 13, replies:

Oh it’s really common. I rang one father and asked him to come down to the station and he refused saying his son was asleep in bed. I had to insist several times that he went to look himself. He did look. Came back to the phone and said he’d be down in five minutes.

We wait on a bench for a while. I tell my daughter that I won’t be telling grandma and grandpa. For the first time she shows emotion:

Oh thank you, she exhales, with pent-up relief.

It’s significant that they are the people whose disapproval counts most. I can’t blame her. I’m scared of them too… which is why I’m not telling them.

An inspector leads us into a little room. He extracts two new tapes from their wrapping, explaining that one will be sealed for the court, if it should come to court and the other is for his notes. I’m told I cannot speak during the interview. He asks my daughter her name and school.
He shows her the evidence, a half smoked reefer, in a plastic bag:

Were you smoking this this afternoon in R place?

Did you know that it is cannabis?

Do you know that cannabis is illegal?

Have you smoked cannabis before?

Where? with friends or at home?

(I stiffen, thinking oh shit. Cos up to now I’ve been playing the good mother. But the truth is, on occasion, I will smoke the odd joint. Not often and I don’t buy it. Many of my friends smoke. They’ve smoked at my house. I’ve smoked joints with friends at my house. Don’t drop me in it, I’m thinking silently, to my daughter.)

Er, with friends and stuff, she says. Phew.

He ends the interview. He asks about her school. He says to me:

Well I shouldn’t be here, interviewing a 14 year old school girl about smoking a bit of blow. Most of the police here have smoked blow. Some of them still do. But it is illegal. This will be kept on file. We will not take it to court but you are getting a reprimand. This is a first offence. But if you do it again then the consequences will be more serious. These papers will be passed onto the relevant agencies, social services etc.

He reassures me: Your daughter goes to a good school and comes from a good home. We are not worried about her.

I gulp, thinking I’m not so sure about that.
On the way home I look at my daughter’s mobile. That boy is still texting at 11.30 pm. I see from the other night, he has texted:

I’ve just had the funniest row with your mum.

I see that she has texted him back with:

My mum is a fat ugly old cow. She is mental.

I feel tired. No, not tired. Something else. Despair?


That night my daughter sleeps in my bed. I see her little shoulders. I feel sad. She’s only a little kid. (In fact one of the reasons she was arrested is that she’s so small and young looking. The police thought she was only 12.) She must have been really frightened. I feel guilty about telling them to keep her in a cell. I feel worried that she now has a record. In the morning I say:

You do realise now that if your mates start smoking, you have to move away don’t you? That you can’t take any risks now?

Yes I know mum, she says.

(1) Keeping DNA indefinitely for people not convicted of any crime has now been successfully challenged in the European courts (link).