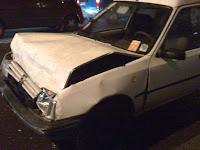 Later that night I was supposed to meet a man for a date. When stopped at traffic lights I left him a message to say I would be late. As I pulled away from the lights, something flashed, I glanced down momentarily, then piled into the back of a black taxi. It all happened so quickly. I think he may have stopped. I wasn’t paying sufficient attention. Anyway, it will be my fault as it always is when you crash into the back of a car. So eventually I got out of my car. The taxi driver emerged. He had a black eye.

Did you just get that? I gasped.

He admitted that he didn’t. But then he moaned that he had a bad back. I started crying. My mind was partly still rushing to the date. I called the date, let him know what had happened. He said he would cancel the restaurant and come to where the accident was. I couldn’t stop crying and apologizing to the taxi driver. But the taxi driver kept scowling at me. He called the police and the ambulance. My head hurt. I called the RAC, who peppered me with a million questions which I had great difficulty in answering. The RAC man was unsympathetic and insensitive. He refused to send a recovery truck until I answered every question. I put the phone down. The ambulance people told me to sit in the back of the ambulance.

You aren’t in any trouble, they said.

They kept asking questions. The police came and asked more questions. I couldn’t remember anything… my address, the name of my insurance company etc. The date kept calling…where is your car?

Then I confessed to the ambulance and police that I was supposed to be on a blind date. They found this hilarious. I’d made their night.

We thought you looked all dressed up they said.

They asked more questions…how did you meet him? I felt so tired. Another policeman got in the ambulance and said with an air of finality Well you are obviously a very unlucky person. I looked at him. If this was humorous I was, well, just not in the mood. The ambulance people intimated that the taxi driver was pretending to have a bad back.

The date called I’m outside, just next to your van.

I got out to look. I didn’t have my glasses on. I just saw a man looking angrily at me next to my van. I gulped and went closer, I saw it was the taxi driver. Then, a little further away, I saw my date, waving at me.

The taxi driver hissed at me accusingly: You said it was all your fault but your statement to the police doesn’t say that.

I did say it was my fault I wailed.

Fortunately the date stepped in and put a stop to the taxi driver’s bullying behaviour.

That’s what insurance companies are for. He said. They will sort all of this out. Anyway the fact that she went into the back of you means that technically it’s her fault.

The date took me for a much needed drink. It was freezing cold. I hadn’t eaten. I drank 5 glasses of port on the trot. I could have drunk the whole bottle. I went to the bathroom. I saw in the mirror that my eye make-up was streaked down my cheeks. I tried to lick it off with a tissue. The date had mentioned in an email, that his wife had died. I asked when and he replied evasively. On returning to the table, he mentioned his wife…

When did she die? I asked.

He hesitated: Two months ago.

TWO MONTHS AGO? I thought in my head.

What did she die of?

I looked at him quizzically thinking: does that even exist?

Yes, I was on a bus with her and we were talking and then suddenly her head went back and she was a strange colour. Naturally my training kicked in. I laid her flat on the floor, tried to resuscitate her but by the time the ambulance arrived she was dead.

I stayed silent. For once I didn’t know what to say.

He continued: There has been an autopsy but we are waiting for the inquest. It takes ages.

I looked at his hands. He was still wearing his wedding ring.

Then, the RAC man called: I’m at your vehicle where are you?

I’m in the pub, I’ll be there in ten minutes.

I put my coat on and got up.

Fifteen seconds later, the RAC man called again: Well! Where are you? We have lots of customers waiting you know.

I’ll be there as soon as I can. But it was freezing cold waiting and I needed a drink after the accident.

The date and I walked to my poor little van. It’s nose was all crushed up.

Well goodbye said my date, handing me a packet of licorice.

I got in the RAC man’s van and we drove home. After manoeuvring the crushed up van into my driveway, I went indoors and told my daughter what had happened. During the description, she never once moved her eyes away from ‘I’m a celebrity get me out of here’. She then started laughing at something that happened on ‘I’m a celebrity’.

Monday night I went to the Astrological Lodge. When the astrologers heard about the accident they each immediately asked the same question: did you get the time of the accident?
When I got home from the lodge last night, I checked on my daughter in bed. It was half past eleven. Her ‘boyfriend’ called.

Why is he calling at this time on a school night? I ask.

My daughter sullenly says: So what. I can’t sleep. Nor can he.

I ask for her phone. She refuses to give it to me. We have a tussle and I manage to get it.

It’s my phone! she screams.

I text the boyfriend saying: Do not call my daughter after 9.30 pm on a school night.

My daughter is screeching: I HATE YOU. You are using my minutes.

It’s not your phone and not your minutes I say. I paid for it. You will do as I say.

The boyfriend texts back: ‘Hey I’ll just make sure I don’t get caught next time, yeah. Cos it doesn’t count then. lol.’

I text: ‘Don’t be so cheeky. I will tell your parents and the school if you continue. You can call later at weekends, not on school nights. I always follow through on my threats’.

I hand the phone back to my daughter. She says:

I wish you had died in that car crash yesterday.